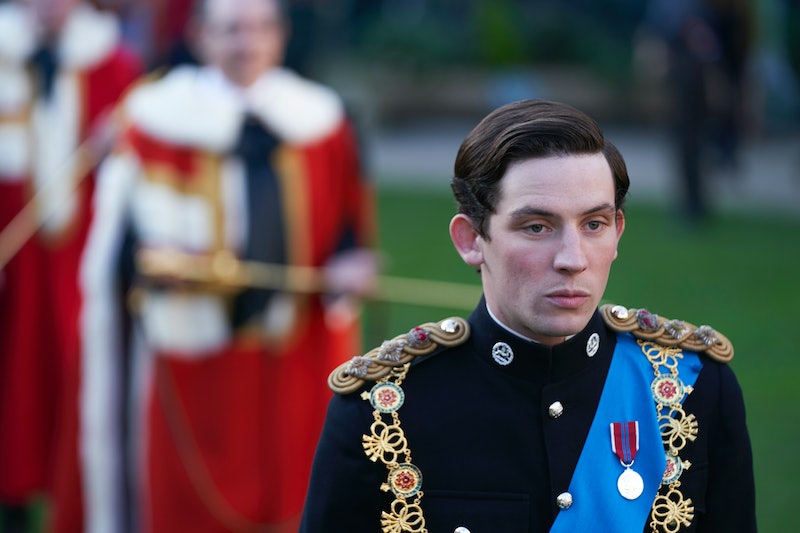 Sometimes you're just born to play a role. Josh O'Connor, who plays Prince Charles on The Crown, would know. The English actor joked to GQ that as soon as the show's casting director saw his ears, he "gave [him] the part there and then." But that's not the only reason he was the right person for the role.

For one, O'Connor was willing to do the extensive research necessary to play the young adult Charles as he falls in love for the first time with Camilla Shand (later Camilla Parker Bowles) and gets his heartbroken. "I've never researched anything so much," he told Entertainment Weekly of his preparation. According to the outlet, O'Connor also took voice lessons to perfect Prince Charles' way of speaking and learned how to ride a horse. And per The Sun, he studied some Welsh, too, because as the Prince of Wales, Prince Charles can speak the language.

At the same time, O'Connor was cognizant that he wasn't trying to recreate Prince Charles exactly, but rather a version of him. "I'm playing a character, and a creation that Peter [Morgan, The Crown showrunner] has come up with, and I've come up with," he told EW. "If anything, it's taking as much research as you can, and then actually being able to throw it out the window at the end of it, so you take what you need, essentially."

O'Connor told the Evening Standard that he didn't grow up in a Royal Family-obsessed household, which means that during his research, he was learning a lot about Prince Charles for the first time. But when playing a public figure that so many people have opinions about, it's almost more helpful to be able to go in without any bias.

As for O'Connor, according to his IMDb page, he's been acting since 2012 and has appeared in a host of projects over the years. Most notably, he was in Florence Foster Jenkins alongside Meryl Streep, as well as the Les Misérables TV series and Peaky Blinders. The Queen herself is even reportedly a fan of a show he was in called The Durrells.

But that didn't stop O'Connor from being a little bit starstruck while filming The Crown. "I remember looking over and being like: 'Holy sh*t! This is it. This is the peak for me,'" he told the Evening Standard of working with Olivia Colman, who plays the Queen (aka his character's mother) in Season 3. "You have to stop yourself midway through a scene and be like, 'I'm acting with Olivia Colman!' But then she's also got this amazing thing where they call 'cut,' and she's like, 'Shall we have a cup of tea?'"

O'Connor will be able to keep having tea with Colman for at least one more season, because though The Crown recasts its actors roughly every two seasons to account for its characters' aging, he'll still be a very present part of Season 4. That means he'll get to tell one of Charles' most important stories: how he met Princess Diana.

More like this
Helena Bonham Carter Doesn't Think 'The Crown' “Should Carry On"
By Sam Ramsden
'The Crown' Season 6 Has Suspended Filming "Out Of Respect" For The Queen's Death
By Bustle Staff
Grammys Host Trevor Noah Made Adele's Dream Of Meeting The Rock Come True
By Brad Witter
'The Last Of Us' Episode Schedule Competes With The Super Bowl & Oscars
By Brad Witter
Get Even More From Bustle — Sign Up For The Newsletter
From hair trends to relationship advice, our daily newsletter has everything you need to sound like a person who’s on TikTok, even if you aren’t.