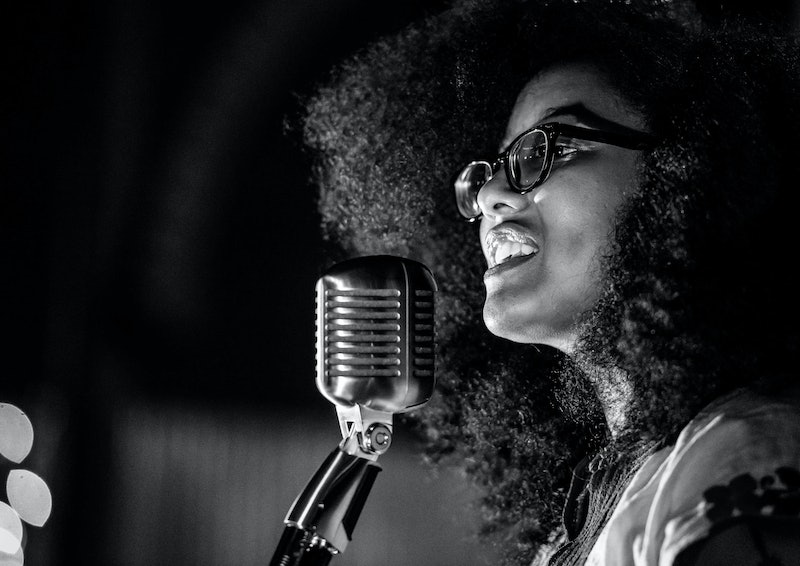 Poet Ariana Brown was doing a show in Tucson, Arizona when a fellow performer broke out in a rash. Having grown up in the Southwest — San Antonio, to be exact —  Brown is familiar with the local plant life. She set off to find some aloe vera, and within minutes of applying the succulent’s extract, the rash healed and Brown gained a new nickname as “part-time curandera."

"I thought about what I want my poems to do in the world, and I want them to heal people, just like aloe vera does," she tells Bustle. "Just like the natural world does. Just like curanderas do.”

Brown, 24, is a Black Mexican American poet who has received numerous awards and thousands of YouTube views for her spoken word poetry on topics including class, gender, and racism. Her performances are laced with rage, and sometimes, her voice trembles as though the words can’t come out of her quickly enough.

"I thought about what I want my poems to do in the world, and I want them to heal people."

Much of this rage stems from her experiences growing up in two marginalized communities. She tells me she was called the n-word as early as five-years-old, and throughout her life, she's struggled to reconcile her Mexican identity with the anti-Blackness prevalent in Mexican communities.

"If you are alive, you are descended from a people who refused to die. Nothing is more sacred than you,” she says in one of her poems "Curanderismo."

In messy girl, her latest collection, she writes about healing in the aftermath of her worst bout of depression. The poems featured in the 38-page chapbook were written in 2014, a time, she says when the "misogynistic voice" in her head took the reins. Three years later, she came across the poems in a Google Drive document. She opened them and "expected to cringe," but instead she found that she had "compassion for the girl I was and the woman I was trying to become."

On her website she describes the chapbook as "an attempt at unraveling the lies I inherited about womanhood and required suffering." One of these lies is that a woman's worth depends on her perceived value to men.

“I used to think the most important quality in a woman was how desirable men found her," she tells Bustle. "I used to think advocating for myself, having unpopular opinions, demanding what I need, was somehow not ‘feminine’ and therefore made me undesirable.”

"I used to think the most important quality in a woman was how desirable men found her."

No stranger to incendiary and passionate verses, the poet uses the chapbook to confront ugly truths:

"I am no place where things come to linger without offering. And what do you have to offer? a lovely morning song—a memory? I’ve got my own music to pull from the dawn. will you go, and stay gone?"

Brown drew much of the inspiration for these verse and poems from a failed relationship. She also felt compelled to write about the emotional violence Black women experience.

"Black men, especially, in my experience, view us as disposable," she says. "We are supposed to nurture and take care of them — but who takes care of us? Who fights for us? Who loves us, unconditionally, because we are worthy of love, not because of what we do for them?"

In messy girl, she explores her blackness as she unravels the beliefs that affected her confidence as a Black woman and bled into her relationship.

"I used to think of myself as quite undesirable because of my Blackness, my body, and other insecurities," she says. "I used to think that finding someone who was capable of loving me was almost impossible. That belief worked against me the whole time I believed it, because it made me settle for a lover who loved me selfishly and cruelly.”

"I used to think of myself as quite undesirable because of my Blackness, my body, and other insecurities."

Brown’s healing came in part with help from her ancestors. This is a connection she continues to nurture and the heartbeat of this relationship drums in many of her poems, most notably in “Volver Volver," a poem about racism and cultural pride where she states, "I am always amazed that the ability to forget history is a choice for some people."

"I have always been a very spiritual person," she says. "One of my favorite things about my experience of being a Black American is that we inherit understandings of a larger, ancestral Black community. We understand that the actions and experiences of our ancestors very concretely shape our present."

Praying aloud, singing old Motown songs, and talking to the wind, sky, and plants are some of the ways she feels connected to the natural world. She also credits her therapist with helping her understand the medicine she needed already lived within her.

“These practices helped ground my spirit, even if only for a little while," she says. "They helped me remember that I am part of a much larger, older, wiser world.”

In giving the book the title of messy girl, Brown is embracing self-love. Once, she felt anxiety and guilt about her appearance, but now, she feels comfort and ease.

"I hope people’s experiences are validated as they read this, but even more, I hope that readers will understand my vulnerability and decision to create my own healing as an act of bravery that they are capable of, too," she says.