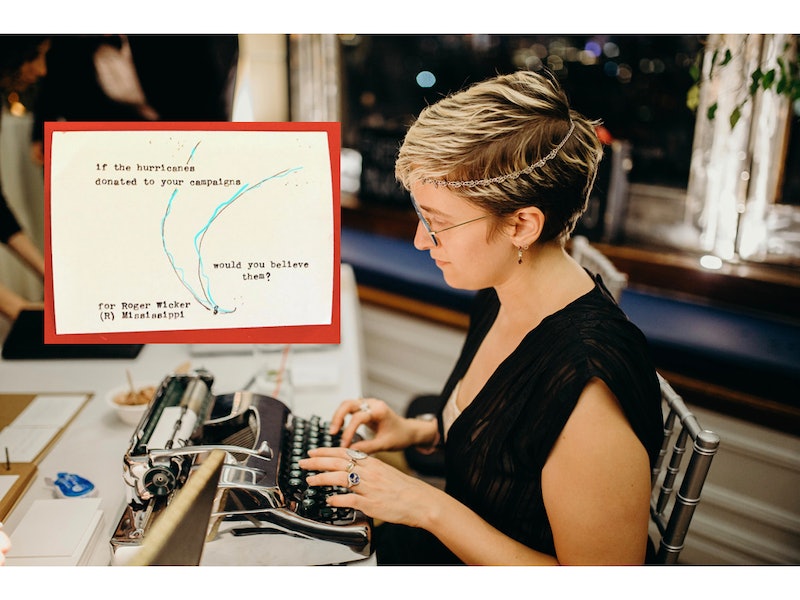 "Poetry makes nothing happen," or so wrote W.H. Auden in his 1939 elegy for Irishman W.B. Yeats, a poet and a senator. It's a sentiment more writers than not would refute, and, strangely, it's almost entirely contradicted by the following words, often erased in the collective memory of that line: "For poetry makes nothing happen: it survives..." Later, he describes poetry as "A way of happening, a mouth."

Poetry and politics are inextricable, as Lisa Ann Markuson, the co-founder and managing director of The Haiku Guys & Gals, understands well. As part of her #PoemsForSenators project, she is writing a haiku for every single senator in U.S. Congress and posting the poems to her Instagram page. These are not the saccharine haikus you wrote in your high school AP English class; these poems are raw, polemical, and grating.

"I started thinking about empathy, and the way our political leaders seem to be so far away from us, so untouchable," Markuson tells Bustle. "I wanted to figure out something that I could do to bridge the gap between them and us, something that could potentially show them a new perspective on themselves and their work and help them relate better to the citizens for whom they're responsible."

Markuson launched the 100-day-long project in August 2017, beginning at the start of the alphabet with Alabama Senator Richard Shelby, a Republican who was first elected as a Democrat in 1987. Shockingly, as Markuson learned through her research, switching parties isn't even his most egregious flip-flop to date: Shelby formerly supported Joe Biden's bill banning semi-automatic rifles, but he now holds a "A+" rating from the National Rifle Association. In her poem, Markuson specifically addresses this contentious policy change:

Not every politician receives the same exorciation as Sen. Shelby; in fact, though Markuson's personal politics lean left, she says she seeks out the positive when narrowing down topics for her poems. (Which is not to say, however, that she doesn't routinely drag the more prickly and controversial of politicians, usually on the Republican side.) Every day, she spends an hour or two researching the senator's background and politics before sitting down to write the poems.

"Sometimes I get into a rabbit hole of legislation, local politics, scandals, NRA-fueled dystopian nightmares," Markuson says. "But then to write the poems I meditate on the human being, and hone in on one element of their passion that seems to stand out, one part of their work that is most notable. They're fascinating people! I have learned about them as individuals, but I'm also learning about the bigger systems at play, and learning what issues mean the most to me. I'm learning what I respect and what I despise, and thinking a lot about what other things I want to do to try to change the things that seem broken."

In one of the most gushing poems of the series, Markuson writes of Sen. Kamala Harris's commitment against gun violence and the death penalty. The poet took her inspiration from Sen. Harris's first name, which means "lotus" in Sanskrit:

It appears that Markuson has proven that poems can make something happen — conversation. And conversation, as #MeToo or #BlackLivesMatter has already demonstrated, can lead to action, to protest, to political quakes. Markuson has already rallied some famous fans on her Instagram page — including Sen. Claire McCaskill, a Democrat from Missouri. In fact, McCaskill's office shared Markuson's haiku on their official Facebook page, where it did exactly as it was intended: sparked a debate.

"I'm pleased that it is pushing people to look at Congress in a new way," she says, adding that the response on Facebook, Twitter, and Instagram has been overwhelmingly positive.

"People I haven't talked to in ages telling me they look forward to reading the poem of the day," she says. "Strangers telling me they're learning so much, folks commenting on specific poems saying it's their favorite or the best yet."

In addition to her #PoemsForSenators project, Markuson is active in the day-to-day operations of The Haiku Guys + Gals, a semi-nomadic band of modern day literary troubadours who travel the world with their typewriters and write out 17-syllable poems on-demand, many of which they post to their Instagram page. Founded by Markuson, Daniel Zaltsman, and Erick Szentmiklosy in New York City, The Haiku Guys + Gals has expanded into a collective of nearly 30 poets who are available to be booked for events — everything from weddings to breakfast picnics — where they provide free haikus to every guest. On their website, they also encourage fans to submit a request for a free, custom haiku, which can be delivered straight to your inbox or your Twitter account.

What is perhaps most moving about The Haiku Guys + Gals project is their dedication to the democratization of poetry — treating poems as a commodity available to all, and available to be created by all. That belief is perhaps most evident in their latest endeavor: an interactive journal, titled 102 Haiku Journal, that encourages readers to write their own haikus as inspired by 102 creative prompts.

The goals of both 102 Haiku Journal and #PoemsForSenators are, it seems, one in the same. You don't need to be an MFA candidate to write meaningful poems, and you certainly don't need to be a politician to make change happen.

"You don't have to be a policy wonk or a Pulitzer Prize winner or an antifa activist on the streets to make this world better," Markuson says. "All you have to do is care a little bit more than you do right now. Our laziness and passivity and the illusion of 'security' have gotten us into a very unstable, hate-filled, and violent place in the country, and only dedicated work, deep individual empowerment, and true empathy will get us to a better place."

"Everyone can make a bit of time to challenge themselves to care a tiny bit less about themselves and a tiny bit more about the wellbeing of others," she adds. "It's always worth it to love a little more."