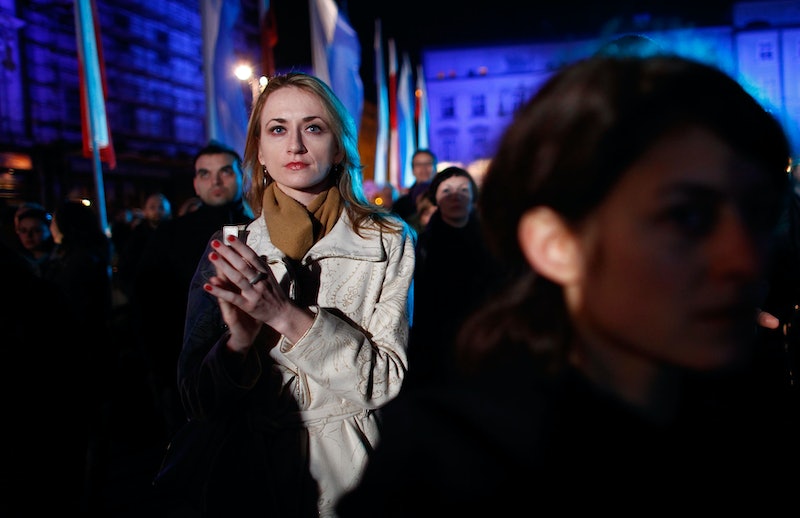 On Monday, women's rights advocates condemned the Polish government over a new law that will make emergency contraception available to Polish women only after they've seen a doctor and have a prescription. International human rights advocates and critics of the prescription requirement for the morning-after pill — which goes into effect next month — say it could result in unwanted pregnancies and put undue stress on rape survivors.

"We consider it as another blow to women's rights, and will affect teenagers and those in remote rural areas, and will have a particularly catastrophic impact on rape survivors," said Draginja Nadazdin, director of Amnesty International in Poland, in a statement.

The legislation, signed into law late on Friday, comes less than a year after the government tried to impose a near-total ban on abortion in the Eastern European country. The Parliament ultimately rejected the proposal after massive demonstrations.

According to The Guardian, a spokesperson for the International Planned Parenthood Federation said:

The new Polish law passed by the country's chauvinist authorities allow abuse of power by doctors who may feel that they have a right to judge the sexual lives of women based on their own moral convictions. As Europeans we cannot stay still and watch.

The IPPF spokesperson also noted that the new rule creates an internal inconsistency within the European Union:

On women's rights, we are faced with a two-speed European Union where girls living in the right place can get free contraception, including over-the-counter emergency contraception, while others face an uphill struggle.

Poland's health minister, Konstanty Radziwiłł, said that the new law was necessary because hormonal contraceptives were being abused. He said that with the new law, women will "get advice on whether these substances negatively affect their health." He has also said, according to The Telegraph, that morning-after pills induce an early abortion. Scientists and doctors have refuted these claims, saying that emergency contraception prevents conception from occurring.

Some have contributed the decision to staunch Roman Catholic beliefs among the Polish. Others said that the new rule was a matter of politics.

As reported in The Guardian, Sophie in 't Veld, a member of the European Parliament commented:

The current populist national-conservative Polish government is enforcing a sexual counter-revolution, against the health interests and wishes of Polish women and girls. ... Restricting access to the morning-after pill, combined with the right of doctors to refuse treatment based on religious grounds, will have far-reaching consequences.

More like this
Iran Has Issued A Death Sentence Over Mahsa Amini Protests
By Catharina Cheung, Darshita Goyal and Maxine Harrison
Read Dan Levy's Heartbreaking Message After The Club Q Shooting
By Stephanie Topacio Long
MOBO Awards Found Kanya King On The Woman Whose Grit & Determination Spur Her On
By Kanya King
Amanda Gorman Shared A Powerful Message On Meghan Markle’s Penultimate Podcast
By Darshita Goyal
Get Even More From Bustle — Sign Up For The Newsletter