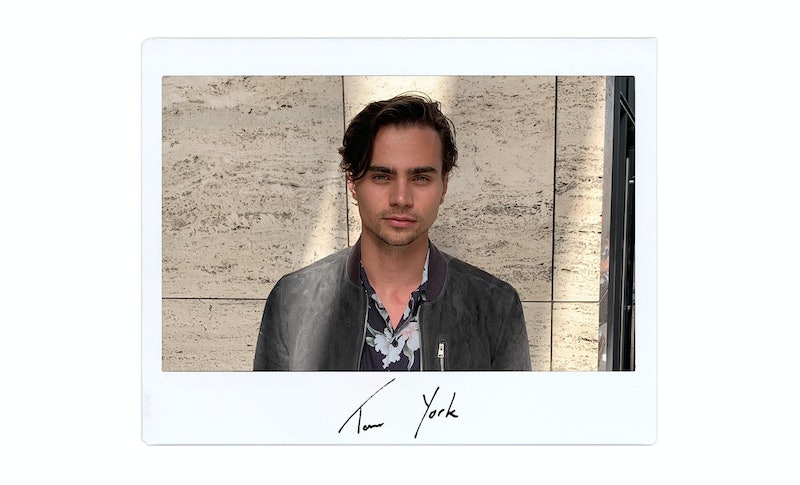 When celebrities hang out with Bustle editors, we want to give them the chance to leave their mark. Literally. So we hand them a pen, a piece of paper, a few questions, and ask them to get creative. This time, Poldark actor Tom York is leaving his mark in the Bustle Booth.

Now that Poldark is well and truly over, its acting talent are free to roam new paths. For Tom York (the actor who plays devout Methodist Sam Carne, not to be confused with the Radiohead frontman of the same name), the next stop could be a slightly more villainous role. "I would love to play a baddie!" he told the BBC.

"Sam has taught me to have faith in the way things will work out, and that it is not always about making the right decision but more about making the best decision you can. He is a good man and he has opened me up and made me a better person, but it would be really fun to play someone next with a bit of darkness in them!"

Since being cast in the hit drama series, York has wormed his way into the nation's heart. Born in Hampshire, per Phoenix magazine, he attended the acclaimed London Academy of Music and Dramatic Art (LAMDA). There, reports The Sun, he took to the stage, playing roles including Hamlet and William Shakespeare himself.

After graduating, York swiftly moved to the land of TV, first appearing in political drama series Tyrant. He then landed the lead role of Hero in fantasy show Olympus before going on to appear in the likes of Death in Paradise, Endeavour, and Midsomer Murders.

The actor is still a bit of an enigma, only revealing in interviews that his Poldark character "is so different" to his real-life personality. In fact, it was the thought of getting an alternative perspective that spurred him on to audition for the part. "It is very rare as a young man to get to play a part where there is a real principle," he told The Sun.

Over the years, the entire Poldark cast and crew became a close-knit group. Speaking on Lorraine, York described their Cornwall filming periods as "a family holiday." As well as learning from his character, he also learnt from the unpredictable British weather. On This Morning, the actor revealed that a bad Cornish climate forced the cast "to really think on [their] feet."

He seems to be a big fan of nature. As well as falling in love with Cornwall, York previously spent five weeks trekking from France to the west coast of Spain. "When I was 18, I was desperately trying to get into drama schools, but knew that places were hard to come by," he recalled to Phoenix magazine. "I needed to find something else that I could do depending on whether I got into drama school or not."

"I was armed only with a backpack, a guide book, and an ignorant bliss. I learnt on my feet, and from blizzards on top of mountains to the blistering sun of Spanish meadows, it was an experience that I’ll carry with me for the rest of my life."

As York waves goodbye to Sam and hello to pastures new, he will be kickstarting a series of free lectures in North Yorkshire, discussing his life in acting thus far, reports The York Press.

From his first TV crush to the one thing he wants people to say about him, get inside York's head in his Bustle Booth questionnaire below.