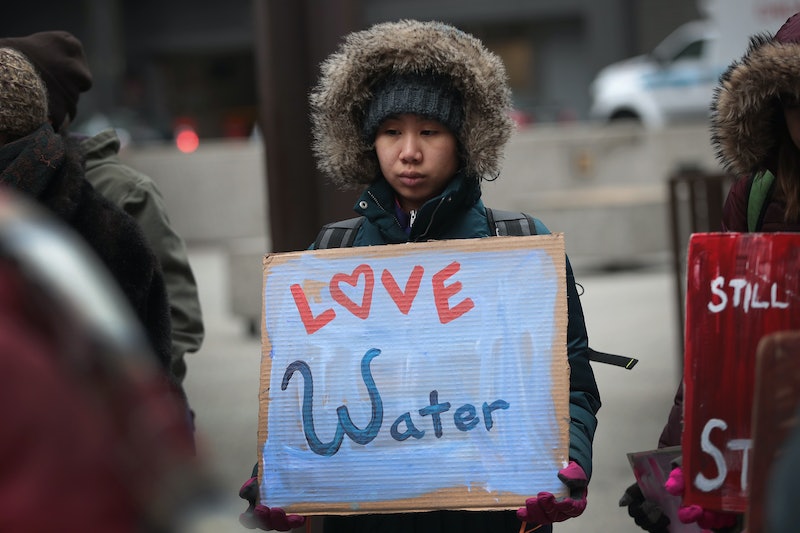 A little after 4 p.m. on Wednesday, police began arresting Standing Rock protesters who were still on the land after the deadline to leave had passed, the Associated Press has reported. The deadline had originally been set for 2 p.m. and was pushed back a couple of hours before police moved in. Many protesters had left before the deadline arrived so to not risk arrest, but there was still a large amount of people who stuck around to make one last stand.

Last year, Obama halted the Dakota Access Pipeline project, citing environmental concerns. Protesters, who call themselves "water protectors," were fighting to prevent the pipeline from going under a lake, potentially affecting the nearby Standing Rock reservation's water supply. Opponents of the pipeline also were concerned that the possibility of oil spills in the future could affect local communities and the fact that the pipeline would go through federal land. But with Obama's declaration, there seemed to be some hope.

However, when Donald Trump was elected president, concerns increased again and for good reason. Soon afterhis inauguration, Trump reversed Obama's halt of the pipeline and not only signed an executive memorandum for it to continue (and quickly), but also declared that the environmental review Obama had ordered be ended. This led to more protests, which culminated Wednesday in the forcible evacuation of demonstrators.

Andrew Kimmel was reporting live from the scene on Facebook for BuzzFeed News and spoke to several people who said that arrests were being made, some possibly during prayers and some allegedly with force, as there were allegations that a reporter may have been injured during an arrest by several officers. That has not been confirmed, and Bustle has reached out to the Morton County Sheriff's Department and the North Dakota governor's office for comment.

It is not immediately clear how many people have been arrested, though Kimmel estimated between six and 10 people around 5 p.m. local time. Those arrested could face federal charges, from misdemeanors to possible felonies.

Those who had left before the arrests were moving on to various places. Some people were headed home, but some told the Associated Press they were heading on to other camps to continue protesting.

As Matthew Bishop, a protester from Alaska who came to North Dakota several months ago, told AP: "People have been surviving here for hundreds and hundreds of years ... so if I back down, what would I look like?"