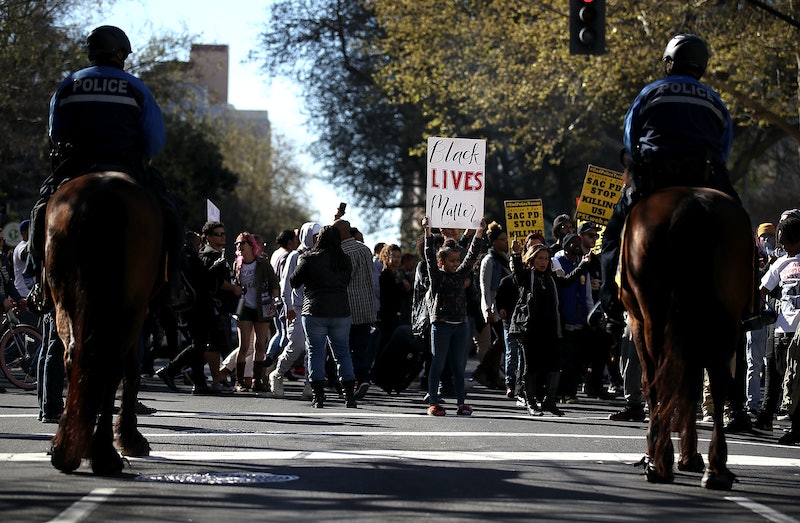 In recent years, organizations like Black Lives Matter have brought mainstream attention to the fatal shootings of unarmed Black Americans by law enforcement officers in the U.S. A 2017 analysis of FBI data by Vox revealed Black people accounted for 31 percent of all police killings in 2014 — despite making up only 13 percent of the U.S. population. Following high-profile cases of police shootings, it’s not uncommon to see protests and vigils held across the states, or to hear family members of the slain speaking out against the violence. A new study has found that being exposed to news about police killings of unarmed Black people in this way has a major effect on the mental health of Black Americans in the long term, even if they aren't directly affected by the violence.

The research, published in The Lancet on Jun. 21, surveyed close to 40,000 Black Americans across the U.S. The interviews were conducted within three months after a Black person was killed by law enforcement in their state. Interestingly — but not surprisingly — the study found that police killings of unarmed Black people were correlated with poorer mental health for Black Americans in the general population.

“These deaths don’t just have immediate consequences for the families and friends. There’s a true mental health spillover effect for those not directly involved,” Dr. Atheendar S. Venkataramani, an assistant professor of medical ethics and health policy at the Perelman School of Medicine at University of Pennsylvania (UPenn), and co-lead author of the study, explained in a press release from Penn Medicine. “The effects are likely even larger than what we estimated.”

As the press release explained, the researchers collected this data by asking the people taking the survey, “Now thinking about your mental health, which includes stress, depression, and problems with emotions, for how many days during the past 30 days was your mental health not good?" The study found that police killings of unarmed Black people created an additional 1.7 bad mental health days for Black Americans every year. Meaning, police violence that results in a death may be estimated to create 55 million more bad mental health days for Black Americans each year; the more severe impact on participant’s mental health occurred one to two months after the shooting occurred. What’s more, researchers also found that white people who participated in the survey did not report poorer mental health in response to the police killings of unarmed Black people.

“Addressing this problem will require interventions to reduce the prevalence of police killings as well as programs that mitigate the adverse mental health effects in communities when these events occur,” Jacob Bor, an assistant professor in global health at the Boston University School of Public Health and co-lead author of the study, said in the press release. “More broadly, the findings indicate that events widely perceived to reflect structural racism cause significant harm to the mental health of black Americans. Efforts to reduce health disparities should explicitly target structural racism.”

The Conversation reported that research in the past has indicated that systemic racism and discrimination not only vastly affects the mental health and stress levels of people of color, but also can negatively impact their physical health. This newest study is yet another reminder that the impact police violence against Black people has on the collective mental health of Black communities is far greater than was previously thought, and may have greater consequences than we can estimate.

More like this
Wimbledon Alters All-White Kit Rule Amid Candid Period Discussions
By Catharina Cheung and Rachel Mantock
Iran Has Issued A Death Sentence Over Mahsa Amini Protests
By Catharina Cheung, Darshita Goyal and Maxine Harrison
Amanda Gorman Shared A Powerful Message On Meghan Markle’s Penultimate Podcast
By Darshita Goyal
Try These 3 Manifestation Rituals To Feel Healthier Than Ever
By Brittany Beringer
Get Even More From Bustle — Sign Up For The Newsletter