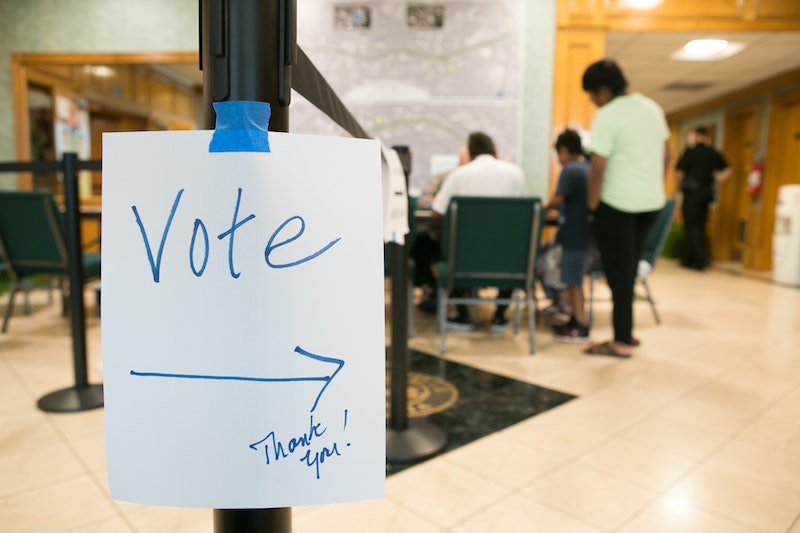 Election officials in Georgia's Randolph County came under fire earlier this month after proposing to close seven of nine total polling locations in the majority-black county ahead of November's midterm elections. The Randolph County Board of Elections and Registration initially announced a plan on Aug. 9 to close multiple polls in Georgia's mostly black precincts. However, following swift backlash from the American Civil Liberties Union and other civil rights groups, the board took less than a minute to vote down the plan.

The Board of Elections announced its poll closure scheme as a way to consolidate precincts. But according to Slate, Randolph County is a majority-black jurisdiction that has had a history of racist voter suppression. So when critics like the ACLU and the Lawyers’ Committee for Civil Rights Under Law learned about the board's proposal to close seven polling places in the county, they condemned it as a blatant attempt to suppress votes.

For years, Randolph County was unable to unilaterally change its voting laws because it was covered by Section 5 of the Voting Rights Act. Section 5 required the county to obtain federal pre-clearance before altering any of its electoral procedures or voting rules. However, the Supreme Court decided in 2013 to strike down Section 5, giving multiple states and municipalities — including Georgia — the opportunity to change their laws without advance federal permission.

The backlash against the Randolph County Board of Elections was both immediate and widespread. The Congressional Black Caucus argued that "the bedrock tenets of democracy would be under attack" if the plan to close seven polling locations was adopted. The Lawyers’ Committee for Civil Rights Under Law threatened a lawsuit, and after the plan was rejected, the committee's president and executive director, Kristen Clarke, was relieved.

"This is a victory for African-American voters across Georgia who are too often subject to a relentless campaign of voter suppression," Clarke told USA Today. "The right to vote is the most sacred civil right in our democracy, and we stand fully prepared to defend that right throughout the midterm election cycle.”

The ACLU, meanwhile, initially issued a demand letter in which it noted that "making it disproportionately harder for African American voters to cast a ballot" was a violation of Section 2 of the Voting Rights Act, as well as of the 14th and 15th Amendments. Moreover, had the plan been approved, residents of the majority-black, low-income county — where public transportation is limited and many people do not have access to a car — would have had an even more difficult time getting out the vote.

But even before the Board of Elections voted against the poll closures, it had a hard time justifying its proposal. According to the Huffington Post, county officials claimed that seven polling locations had to be closed because they were not accessible to people with disabilities. But when the Huffington Post requested records from the county, it became clear that Randolph County did not have any documents or analysis to support that claim — and critics accused the Board of Elections of misusing the Americans with Disabilities Act.

The possibility of poll closures in Randolph County garnered national attention in part because of the timing; during this year's midterm elections, Democrat Stacey Abrams will be running against Republican Secretary of State Brian Kemp to become Georgia's first black governor. Abrams has already pointed out that Randolph County's apparent attempts at voter suppression could impact her own campaign — if she is elected, she would also become the first black female governor in American history.