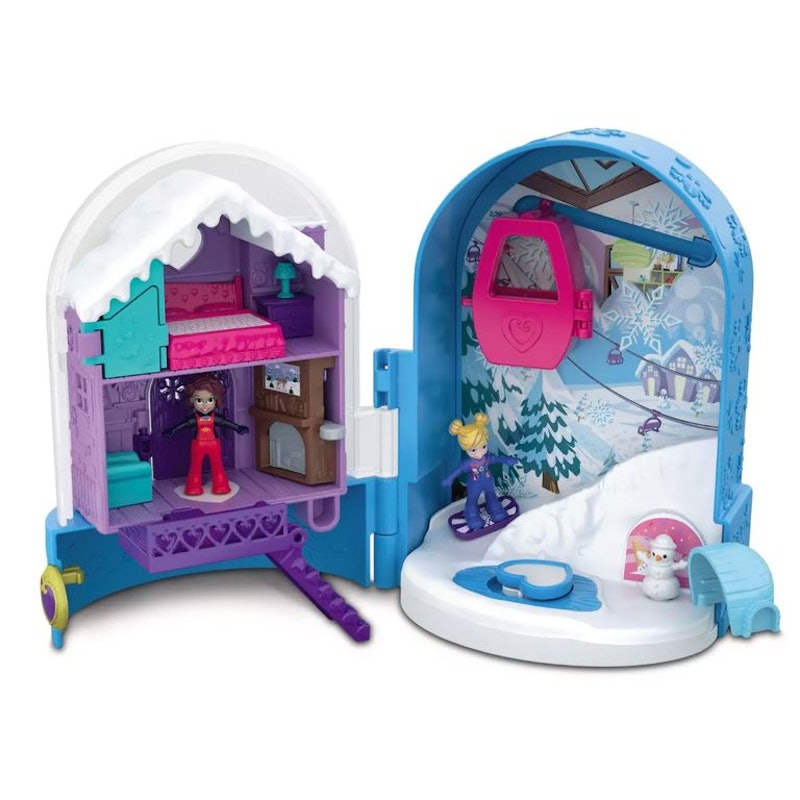 Once upon a time, a Polly Pocket compact was one of the greatest gifts you could get, second only, in my opinion, to an American Girl doll. Those babies came in colorful little homes that beheld miniature worlds inhabited by tiny, plastic people that had a nasty habit of ending up under the refrigerator. The compacts had everything — working TVs, birthday tables, teensy coats of armor, itty-bitty hair dryers, and entire school — the selection was endless. In 1998, the compacts disappeared, but according to BuzzFeed, Mattel just announced they're bringing back the original Polly Pocket compacts. I, a 28-year-old adult woman, am THRILLED.

You see, 20 years ago, the Polly Pocket compact went the way of the Skip-It when Mattel bought manufacturer Bluebird Toys. Though the OG Pollys were less than an inch tall, Mattel made them bigger, perhaps to combat that whole aforementioned rolling-under-the-fridge thing; the evolution was chronicled by Retroheadz. (They also swapped Polly's curly bob for a straight ponytail, an affront to curly-haired children like myself.) Unfortunately, this meant they could no longer fit inside their regular plastic homes, so Mattel bumped them into larger (and more expensive) residences.

But, as BuzzFeed reports, the mini-compacts are getting relaunched, and children and nostalgic adult milliennials will be able to purchase them this summer. Do not that they look a little different from the compacts of yore:

I'm not sure I'm feeling the bright colors, though maybe that's because I'm used to the hipper, muted pastels boasted by the old Polly Pockets. LIKE THIS ONE:

Uggggh it's so tiny and perfect, I love it.

I love this one a little less, I think? Change is hard.

Here is a beauty parlor frequented by the original Polly Pocket:

And here is...an...underwater treasure hunt? New Polly has some skillz.

And here is New Polly's rock club, complete with a limousine. Aren't these toys children? When do they have time to perform live band sets? Where are their parents?!!

And here is New Polly's recording studio, where she records the album I assume she performs in her previously clurrrb.

I'm sure the rebooted Polly Pockets are very appealing to today's children, but I'm not totally sold on the new design. For one thing, these remakes don't seem to feature the same attention to detail harbored by the Pollys of my youth. Teeny 1990s Polly had a TV that changed channels when you pushed a little button. Her house had a working gate and door. Her fridge opened. Her clock changed time. Her couch folded out into a bed. Her homes were decorated with teeny polka dot curtains, potted plants, tiled bathrooms, intricate wallpapering, and bureaus with painted-on drawers and knobs. These new Pollys are *cool* — Polly's a rock star, after all – but they aren't art, in the way the '90s iterations were.

Still, it's cool to see the compacts make a comeback, and certainly these Pollys look a little studier than the bit-sized pieces of plastic that lived inside my old compacts. I used to find all sorts of Polly characters stuck to the bottom of my foot after a good evening's play, and these new guys seem less poky, though I am concerned for their appendages, which unwisely appear to stick out.

Now that the Polly compacts are back, may I make some suggestions for '90s toys that should also make a return? Like, for instance, the aforementioned Skip-It — while I'm sure it was dangerous as heck, it was a fairly good workout. Also, Gak, which was neither Play-Dough nor slime, and had amazing commercials. Most importantly, I would like them to bring back the Barbie Doll Corvette, but make it adult-size and safe to drive on the street. Would be a big hit!