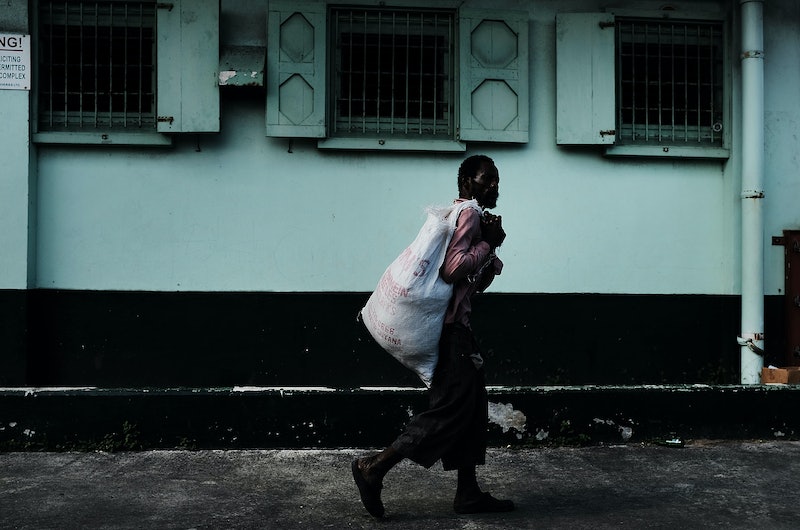 In recent months, sexual assault awareness and rape culture have made their way into the collective conscious through campaigns like the Me Too movement and now Time’s Up, the legal defense fund that provides subsidized support to people who've experienced sexual harassment or assault. Most of us have learned, if we didn't already know, that sexual assault can affect anyone — from actors in Hollywood and CEOs, to farm and service workers. And though sexual assault can and does happen to anyone, marginalized communities are especially vulnerable. According to a 2017 survey, poor Americans 12 times as likely to be sexually assaulted compared to more affluent Americans, and by not talking about it in these concrete terms, it becomes more difficult for survivors to access medical treatment and mental healthcare.

Every year, the Bureau of Justice (BJS) conducts the National Crime Victimization Survey (NCVS), a large study that provides an in-depth look at “nonfatal personal crimes” in the United States — which includes sexual assault, robbery, personal larceny, and aggravated or simple assault. Around 135,000 households (and nearly 225,00 people) are polled every year for the survey about their socioeconomic status and are asked about any crimes perpetrated against them.

The 2017 National Crime Victimization Survey found families and individuals in poverty were disproportionately vulnerable to becoming the victim of nonfatal crimes, including sexual assault. Survey participants with a household income of less than $7,500 (for reference, the 2017 poverty line for a four-person household is $24,600) reported sexual assault or rape at a rate 12 times higher than surveyors with a household income of $75,000 or more. This 2017 Bureau of Justice poll echoes the findings of a World Health Organization report published in 2002, that detailed the inseparable link between poverty, and an increase in sexual, physical and psychological violence. According to an in-depth report of the survey from FiveThirtyEight, researchers believe poor people may be disproportionately affected by sexual violence because “perpetrators are more likely to target victims who are less likely to report what happened.”

Though victimization surveys are never completely accurate — some researchers even believe data collected from the National Crime Victimization Survey actually underestimates the prevalence of sexual assault in our society — the Bureau of Justice survey is still one of the most widely-trusted national polls on sexual assault since being first created in the 1970s. Numerous factors that may keep a person from disclosing sexual assault, but these variables can become even worse for less privileged survivors.

“Our willingness to believe victims of harassment and violence is not extended to all victims equally. If you’re poor, you may be found less credible when you tell your story.” Emily Martin, General Counsel and Vice President for Workplace Justice, told The Atlantic in an article about the Me Too Movement.

Not only do poor survivors potentially face disbelief, but many cannot afford the financial toll of being the victim of a crime. The data collected from the National Crime Victimization Survey highlights the need make healthcare and mental healthcare resources more widely accessible to survivors who may not have the financial means to pay for supportive services. According to a 2014 report published in Psychological Medicine, over 40 percent of women with mental health issues had been raped or sexually assaulted at least once in their lifetime. Also, studies estimate nearly one in three victims of sexual assault will develop long lasting post traumatic stress disorder (PTSD). Despite how common it is for survivors to experience mental health issues after being sexually assaulted, many people cannot afford the financial burden of health care costs. Seeing an individual or specialized trauma therapist can cost anywhere from $65 to $250 per session before insurance, according to Good Therapy.

Moreover, a 2017 report revealed majority of survivors were required to pay parts of their medical bill after being assaulted — for things such as inpatient hospital stays, prescriptions, STI testing, and forensic testing. Though The Violence Against Women Act prohibits hospitals from making survivors pay for rape kit testing, many people have still been illegally required to foot the bill for forensic exams. For survivors who fall into the income bracket of $25,000 or below, sexual assault can become a financial burden, and hurdle to receiving medical and therapeutic treatment.

Though our society has definitely made major strides in recent months in increasing awareness about sexual violence in an intentional and intersectional way, there is still a long way to go. Survivors in poverty deserve to have access to same treatment and resources as everyone else. Financial barriers should never keep a victim from receiving the services they need.