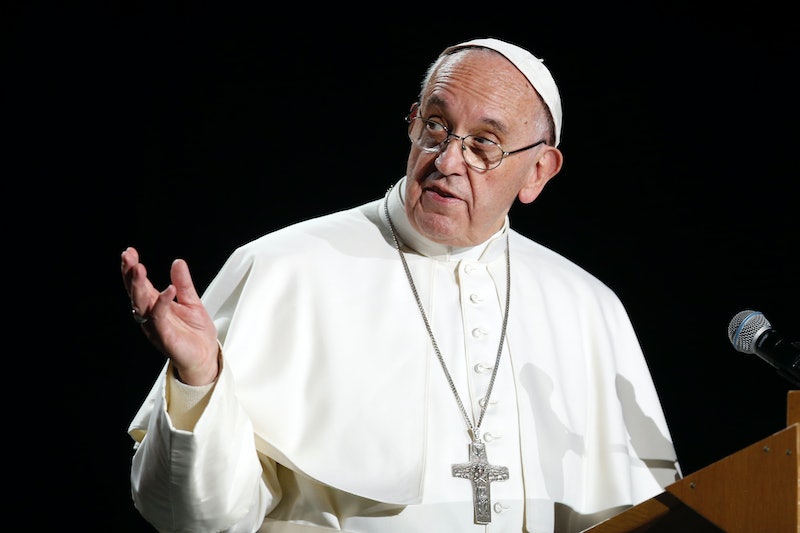 During a United Nations meeting on Wednesday to discuss global agriculture, Pope Francis implied his support for DAPL protestors and their protection of indigenous rights. The Pope implored world leaders to include indigenous people in decisions that affect them rather than perpetuating the social degradation they have endured for centuries. Despite his powerful statement, however, Pope Francis is not likely to have any effect on the pipeline's future, which was granted final approval for construction last week.

"The right to prior and informed consent should always prevail," Pope Francis said, urging nations to work with indigenous people instead of infringing on their natural rights. "Only then is it possible to guarantee peaceful cooperation between governing authorities and indigenous peoples, overcoming confrontation and conflict... For governments, this means recognizing that indigenous communities are a part of the population to be appreciated and consulted, and whose full participation should be promoted at the local and national level."

The Pope did not directly reference the Dakota Access Pipeline in his speech at the U.N., but the context of his statement makes his position on the issue clear. Anyone familiar with Pope Francis's work shouldn't be surprised by this — not only has he advocated for indigenous rights in the past, but he's also called on the business world to embrace renewable energy sources. The DAPL goes against deeply held Catholic beliefs of earthly stewardship and cultural pluralism, which are far too often overlooked as religious values in American politics in favor of issues like abortion and gay marriage.

Unfortunately, Pope Francis's previous statements on issues of moral economic and environmental policy have been largely ineffectual in the United States, so this implied support for DAPL protestors is unlikely to have a significant impact either. At around 25 percent of the country's population, American Catholics do not constitute a sufficiently large or consistent voting block for the Pope to exert any true influence on national politics. According to the Pew Research Center, Catholics are one of the most representative religious groups as compared to all U.S. adults — about 37 percent are or lean Republican while about 44 percent are or lean Democrat. Political polarization being what it is, most of those Republicans or Republican leaners probably support Trump and his policies no matter what the Pope says.

Pope Francis's words should have a special significance for the United States due to its fraught historical relationship with its indigenous people. Yet with Donald Trump in the White House and corporate interests entrenched in the DAPL project, Native Americans seem destined to have their rights and lands desecrated by the government once more. All the protesting and boycotts still haven't changed Trump's mind or protected the Standing Rock Sioux, so unless Pope Francis causes a Catholic uprising against Trump, his support will serve as little more than an ominous warning for the future.