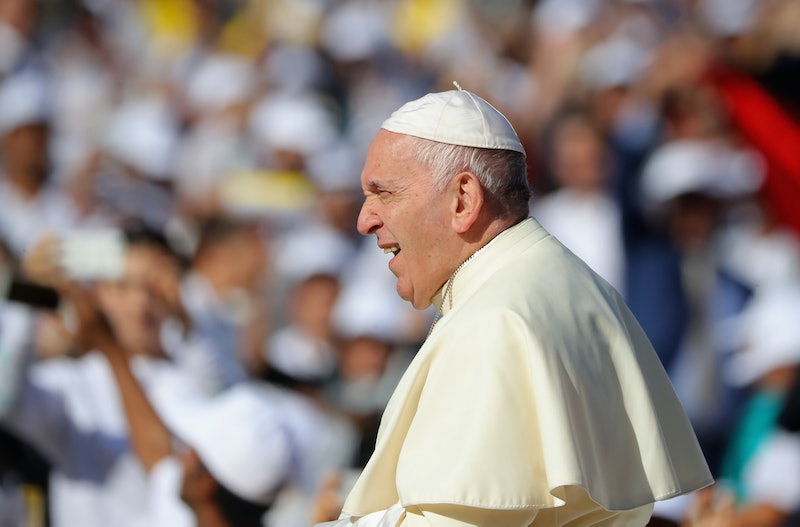 Reports of Catholic clergymen sexually abusing children have spanned the globe and received significant attention recently, but there's even more to the issue of sexual misconduct within the church. On Tuesday, Pope Francis acknowledged that nuns also face sexual abuse and declared that the church needs to "do more" to address the issue, The Washington Post reports.

The pope addressed the problem during his visit to the United Arab Emirates. On board the papal plane on Tuesday, one reporter brought up the February issue of the international magazine Women Church World, which centered around the theme of "touch" and included multiple pieces on the abuse of nuns. The publication called the misconduct an abuse of clergy power and critiqued the church's response to it.

"It is true ... there have been priests and even bishops who have done this," Francis told the reporter on Tuesday, according to Reuters. "I can't say 'this does not happen in my house.' It is true. Do we have to do more? Yes. Are we willing? Yes."

The pontiff went on to guess that "it is still going on, because something does not stop just because you have become aware of it," but he added that action is being taken. "We have been working on this for a long time," he said. "We have suspended some priests because of this."

A spotlight has been shined on sexual abuse in the church in the #MeToo era. Last July, the Associated Press published a massive report indicating that members of the clergy had allegedly assaulted nuns on at least four continents. The article blamed, in part, the fact that the church has for centuries considered women to have "second-class status" to men.

The piece reported on incidents that stretched back decades. In parts of Africa during the '90s, for example, priests allegedly preyed on nuns when they felt they could no longer assume that prostitutes and other women didn't have HIV. The Vatican did not comment on the AP's article at the time.

One story that has drawn particular attention recently is that of a nun in Kerala, India, who accused a bishop of raping her multiple times between 2014 and 2016 (he has denied her allegations). In September, the anonymous woman wrote an open letter to India's Vatican representative to argue that the church has been neglecting women and focusing only on the wellbeing of its male officials. "Will the church authority be able to give back what I have lost?" she asked.

The pope's statements on Tuesday could be a sign that the church will pursue bolder action to stop the abuse of nuns, and many feel that such a move is long overdue. As historian Lucetta Scaraffia wrote in Women Church World this month, "If the church continues to close its eyes to the scandal — made even worse by the fact that abuse of women brings about procreation and is therefore at the origin of forced abortions and children who aren't recognized by priests — the condition of oppression of women in the church will never change."