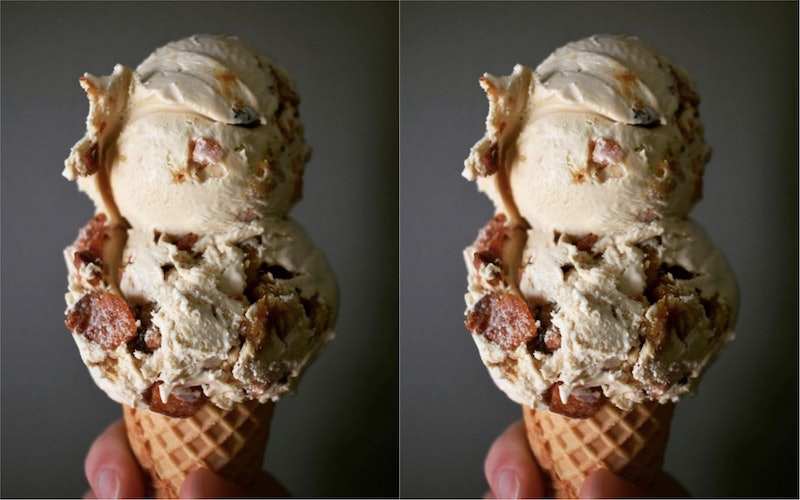 Weird food combinations are decidedly not my thing. Ketchup with eggs? No thanks. Peanut butters and pickles? I'll pass. I was also one of those kids who hated it when my food touched, and I still cringe when I accidentally get syrup on my bacon. A new ice cream flavor from a New Jersey company sounds like my own personal hell, but based on the rave reviews, I'm not as put off as I'd expect — although I'm still giving major side-eye. Pork roll ice cream is now a thing, and I'm honestly not sure what to do with the information.

Introduced by Windy Brow Farms, a bakery, orchard and farm in northwestern New Jersey, the dessert is called Taylor Ham and french toast ice cream. If you aren't familiar with Taylor Ham, it's the brand name for pork roll, which is "made with a mix of spices, salt, a sugar cure, and preservatives," according to Eater. Even though that already sounds like a lot of flavors, the farm's bakery decided it needed to be made into a dessert and combined it with syrup, ice cream and french toast bites.

I'm reminded of the famous quote from Jurassic Park: "Your scientists were so preoccupied with whether or not they could, they didn't stop to think if they should." Thankfully, NJ.com interviewed the managing partner of Windy Brow Farms to find out more about his thought process, and he generously explained how they make the ice cream. First, you caramelize pork roll, then bake it, fry it and add cinnamon and sugar. After that, all that's left is the sweet ingredients. Managing partner Jake Hunt told the publication that the result is a "really good balance of super sweet and super salty.'' I'm not sure if I believe him, but who cares what I think? New Jerseyians are on board with this idea.

The only real controversy they've stirred up so far involves the naming of the concoction. New Jersey residents are surprisingly passionate about pork rolls, a processed pork food that's a New Jersey staple. A Change.org petition that asks Windy Brow Farms to add pork rolls to the ice cream's name has 58 signatures, which is approximately 58 more than I expected. Windy Brow Farms isn't the first brand to come up with bizarre ice cream flavors — you can make or buy flavors like cilantro lime and goat cheese. But adding chunks of ham to an ice cream cone just feels like a step too far. I'm definitely in the minority with my criticism, though — the Internet loves both the concept and the result.

Again, I have a mental block that just won't let me process this ice cream actually being something that is objectively good. It sounds sickeningly sweet and salty, but fans of the pork roll would definitely disagree with me. While I would still try this just to say I did, I just can't see myself jumping on the ham ice cream train. Bacon desserts are suspect enough, so putting literal chunks of meat in ice cream makes me raise my eyebrows. Thankfully, Windy Brow Farms plans to launch other "Only In New Jersey" flavors.

Even though this sounded like a publicity stunt when I first read about it, I can admire the passion that has been ignited in fans of pork rolls. Right now, you can only get the ice cream if you visit the farm, so if this sounds good to you, a trip to New Jersey may be in order. And for the rest of us who aren't adventurous eaters, this new flavor just means there will be more vanilla and chocolate on the shelves for us.