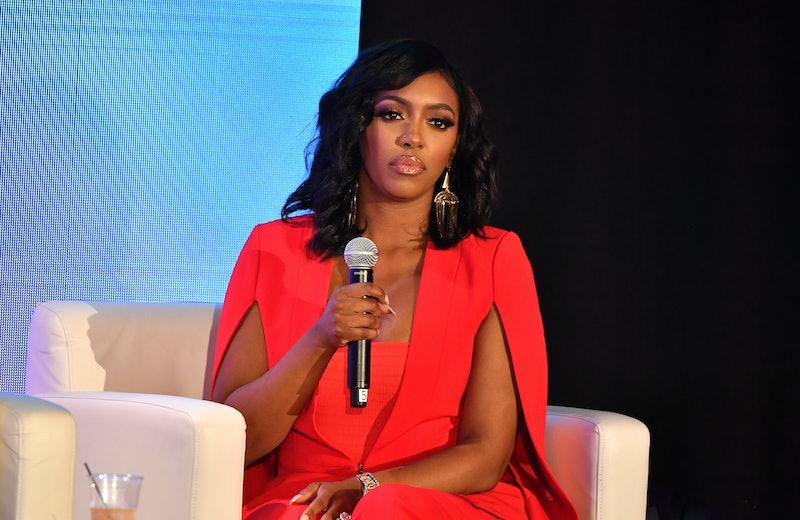 As protests supporting Black Lives Matter continue all over the world, more stars are opening up about their own personal encounters with racism. On Monday, during an interview on Watch What Happens Live with Andy Cohen, RHOA star Porsha Williams recalled being confronted by the KKK at the age of six. While appearing on a special Black Lives Matter-themed episode, the Real Housewives of Atlanta star remembered what she said was her first experience with racism.

Porsha was attending her first protest with grandfather Hosea Williams, a famed civil rights leader and activist. "I was excited to go," she told host Cohen. "You know, as a little kid, you finally get to go to work with your granddad." The march started out peacefully, but they were soon faced with a heinous form of racism and violence. "We came across Ku Klux Klan who decided they were going to protest our protest," she explained. "They threw rocks at us, and I actually got hit with one. They chased us all the way back to our buses. They called us the N-word and any other word you could imagine the KKK would be calling us."

It was a huge turning point for her as a child, one that taught her perseverance in the face of hatred. "There was a conversation with my dad when I got home, to let me know that, 'Some people do hate you, even though you may be trying to do a good thing'," she said. "But what I got out of that is to keep going regardless. I never saw my grandfather stop. I never saw my dad stop, and the movement is still continuing on."

That perseverance is what inspired Porsha to keep protesting in the wake of George Floyd's killing by police officer Derek Chauvin. On June 1, she shared an Instagram video featuring her and fiancé Dennis McKinley at an Atlanta rally that showed the being dispersed with tear gas as they peacefully protest. As she told Entertainment Tonight, Porsha was hit by the gas and had to have milk and water thrown on her face to treat it. "Listen, I'm alright," she said of the incident. "Everyone else who's out there fighting the good fight, they will also be alright, but it has to be known, it has to be demanded, that we are able to peacefully protest. It is the voice of the people. This is how they are being heard."

The Housewife also knows that it's going to take more than protests to make meaningful change. In an interview with Daily Pop, Porsha emphasized the importance of voting — and threw a little shade at people who used the Black Lives Matter protests as a photo op. "If you're activating and you're marching, that is amazing, but also get to those polls and be an affective voter," she said. "That's the only selfie I want to see, ok? Your selfie in line. That's it."