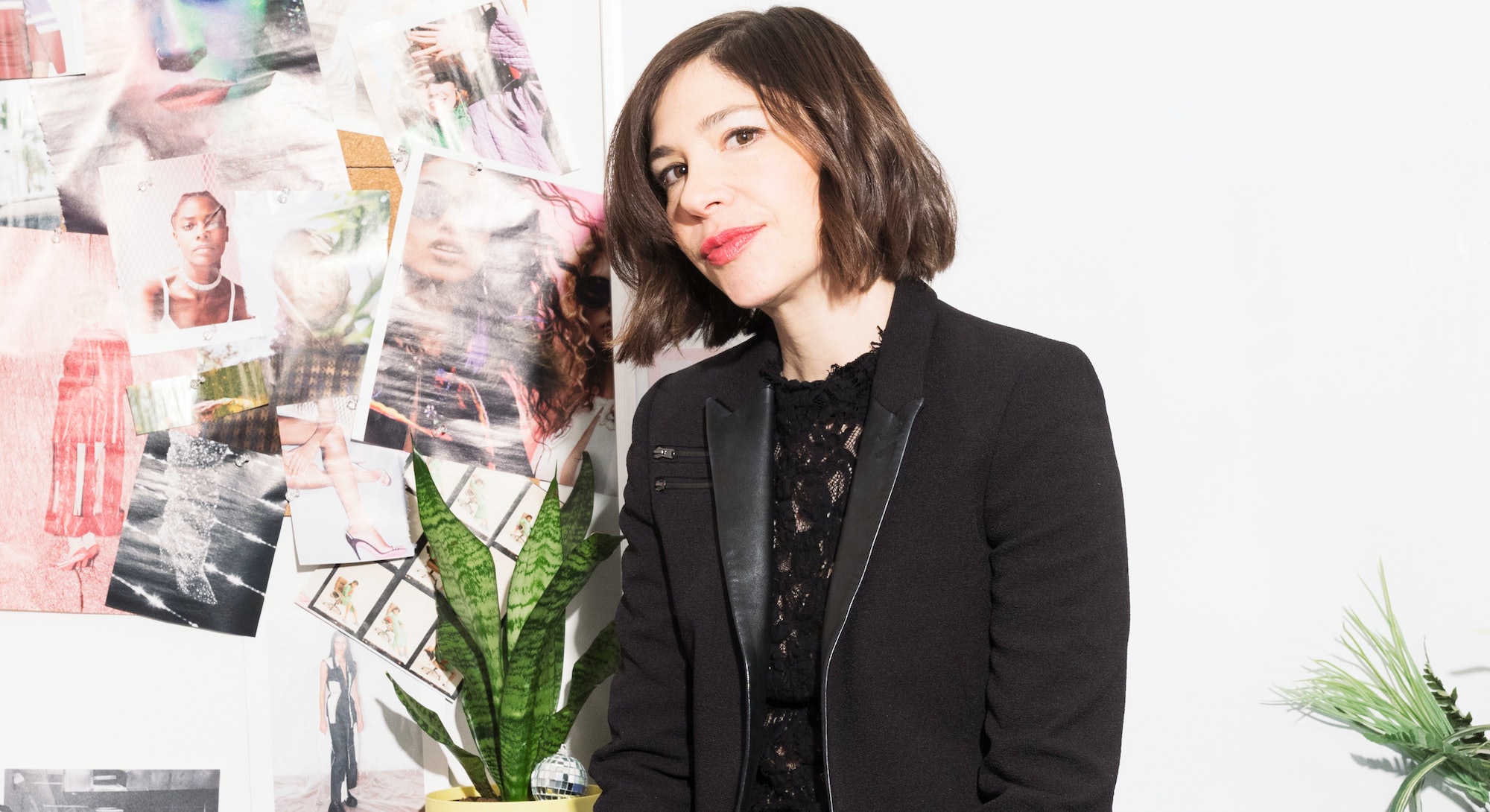 An icy January morning soon after Hollywood's show of solidarity for the #MeToo movement at the Golden Globes and almost exactly one year into the Trump Administration feels like a momentous time to be sitting across from Carrie Brownstein. The Sleater-Kinney guitarist and Portlandia co-creator's work has always been imbued with activism, and the fact that the hipster-lampooning Obama-era staple Portlandia will take its final bow with a series finale on IFC on March 22 feels not only like the end of an era for the creative partnership between Brownstein and comedian Fred Armisen, but a death knell for the light-hearted satire of liberal excess that came to define a time when comedy could afford to be preoccupied with what it meant to put a bird on it.

But we're not talking about that right now — though of course we'll get there — right now at Bustle HQ, Brownstein is making self-deprecating comments about her socks. "They're from Target," she deadpans when someone compliments her pretty ordinary-looking grey and yellow striped socks as she poses for a photo. "I'm pretty highbrow." When someone offers to hold her bag, a worn black backpack, and refers to it as a "purse," she obliges but seems uneasy at this gesture, which so often comes with being "the talent" on set or at any given interview. "You can hardly call it a purse," she says, seemingly eager to downplay the attention.

Though Brownstein's innate ability as a performer got her to where she is today, whether she's ripping a windmill on her guitar while playing with Sleater-Kinney or channeling one of the many eccentric Portland locals she portrays on Portlandia, it's her reserve that's at the forefront this morning. And though it can be hard to reconcile the fact that someone whose art is steeped in outspoken feminism and who has such a distinct comedic voice (never mind her literal voice, a clear alto capable of cutting through even Sleater-Kinney's most dissonant noise) might sometimes still feel uneasy being the center of attention, Brownstein's thoughtful reserve is one of the most genuine things about her.

As we speak, she answers every question — even small talk — with consideration, gesticulating calmly with her gold midi-ringed fingers, and the residual anxiety that she’s described as plaguing her younger years seems to dissipate. Still, it becomes clear that Brownstein hardly seems interested in the attention that comes with branding oneself as the figurehead of a movement.

In contrast to the more showy aspects of the Time's Up and #MeToo movements — the marches, the funny protest signs, the Instagrams, which, to be clear, are still meaningful and Brownstein still supports — Brownstein's personal brand of feminism and activism is more of a sustained slow burn. Though learned through years of criticizing the patriarchy through punk rock in the early '90s riot grrrl movement, they feel more like inherent personality traits than assets a celebrity uses as buzzy selling points in the press. It's something she all but confirms as we discuss the current state of the world and how that's affected her approach to her work.

"I've always thought of feminist discourse as very much baked into the DNA of anything I do. And also, a queer sensibility because that’s where I come from," Brownstein says. While Hollywood has only recently begun to more explicitly prioritize telling stories from perspectives other than those of affluent white men, it's something Brownstein sees as intrinsically linked to her artistic process. "I’ve always wanted to [tell] stories of people who have felt in the margins for a variety of reasons," she adds. "I’m always interested in people who feel out of step. With time, place, or even themselves."

That philosophy extends to Portlandia, which, though it began in 2011 as a loving satire of a subculture, has deepened in its final season to explore the "ambient anxiety" Brownstein and Armisen feel about the state of the world in 2018.

"When we look out upon the world we can’t divorce ourselves from, you know, the state of affairs, the political climate," she says. Trump's election to the presidency hasn't completely transformed the show, but the current political climate has led to smaller shifts in tone. The emphasis on Brownstein and Armisen's iconic feminist bookstore characters Toni and Candace, who once memorably declared, "Every time you point I see a penis," was retooled by Season 7, because their exaggerated outrage at the patriarchy suddenly seemed too on the nose. That led to bringing in Men's Rights activist characters, who became better vessels for exploring anger, masculinity, and a sense of disenfranchisement.

Season 8 also addresses the sexual harassment reckoning of the #MeToo era with a comedic gut punch in the sketch, "I'm Not Bad, Right?" which finds Brownstein playing a lawyer finally promoted to partner who's forced to spend her moment in the spotlight reassuring her male co-workers that they're not the problem despite the workplace sexism she's experienced. That, coupled with sketches about using podcasts as police accountability incentives instead of body cameras and jokes about threatening to move to Canada lend more political heft to a show that once derived glee from envisioning raw vegan restaurants with fart patios.

But while the idea of Portland as a liberal paradise in the Obama era certainly influenced Portlandia's early seasons, which were more focused on parodying things like the artisanal pickling craze and the battle between intellectuals competing to read every important New Yorker article, Brownstein recognizes that life before Trump took office was still filled with strife for many people.

"Depending on your level of privilege, you were able to kind of tune out some of these very pernicious elements that really just rose to the surface in a much more amplified way with the election of Trump," Brownstein says. "But Portlandia’s always been a show that is exploring people’s relationship to place and exploring just the ways people perform states of being. So even though we’ve shifted from an idealism to something that definitely felt like a crushing of that idealism, so much of what we’ve always done is questioned how that idealism came to play in the first place."

While Brownstein spent a good portion of the 2010s lovingly spoofing first world problems like brunch lines and cracked iPhones on Portlandia, she's found release in the discordant sounds of Sleater-Kinney no matter the political climate. Though the band is back in the studio and hopes to have a new album out in early 2019, Brownstein points out that Sleater-Kinney has been an enduring vessel for voicing her discontent no matter who is in office. No Cities To Love, Sleater-Kinney's incendiary 2015 album that debuted in a relatively tame political atmosphere, for example, was a record full of often explicitly political urgency.

"[Sleater-Kinney] has always been a container in which we can relay a sense of dissatisfaction and hurt and anger," Brownstein says. "I think we each return to it when we have the most sense of urgency.... It’s so rare to exist in a place where rage is celebrated and sanctioned. And for us, that is that place. We rely on it and we’re very grateful for it.” Though Brownstein acknowledges that this is an exceptional political moment, coming up through the riot grrrl movement in the Pacific Northwest while coming to terms with her own tumultuous childhood has made channeling rage into into activism second nature.

"I don’t know if I ever stepped so far away from examining the world to not feel a sense of injustice, even though now I think it’s so pronounced," she says, pausing to gather her thoughts. "But to pretend that, even though the Obama years I think have this symbolic value of being one of progress and certainly they were, like symbolically a bettering of so many things, the underlying factor is the underlying inequity in our society that’s always existed. The wealth disparity, sexism, racism, classism — those things did not disappear. So I think any sort of thinking critical person was aware that we’re still operating within that system that needs dismantling.”

"I don’t know if I ever stepped so far away from examining the world to not feel a sense of injustice, even though now I think it’s so pronounced."

Progress, Brownstein points out, is not inevitable. "We go through cycles. We are not just on a trajectory that is forward moving," she adds. That mindset, though, can make it tempting to view this political moment as one of universal decline, and Brownstein's certain that's not the case right now, either.

"I always think it’s a great moment when there’s a wave of awareness," she says, referring to the avalanche of sexual misconduct allegations against powerful men as a defining moment in bringing mainstream feminism to the forefront of the conversation. "A sense of demystifying feminism, taking it out of something that felt maybe alienating to people and realizing it is a tool, a lens... that it really has a practical, political purpose that is trying to address so many systems of dominance and exploitation, like that’s exciting to me. When it feels like the lasso is sort of like reaching out and grabbing hold of much more people, men and women."

It's a step in the right direction, and one that will hopefully push forward this "broader, more nuanced" conversation. Then again, if Brownstein knows anything from her years of experience coming up against the patriarchy, it's that it's hard work that's often fraught with conflict. "I’m underestimating the fact that society is always scared of the notion of women getting together and organizing," she says almost off-handedly. "So you know, you never know what’s going to happen." Real societal change may not be as simple a fix as putting a bird on it, but if there's one thing we know about Carrie Brownstein, it's that she's in this for the long haul.

Makeup by Rebecca Restrepo at TraceyMattingly.com