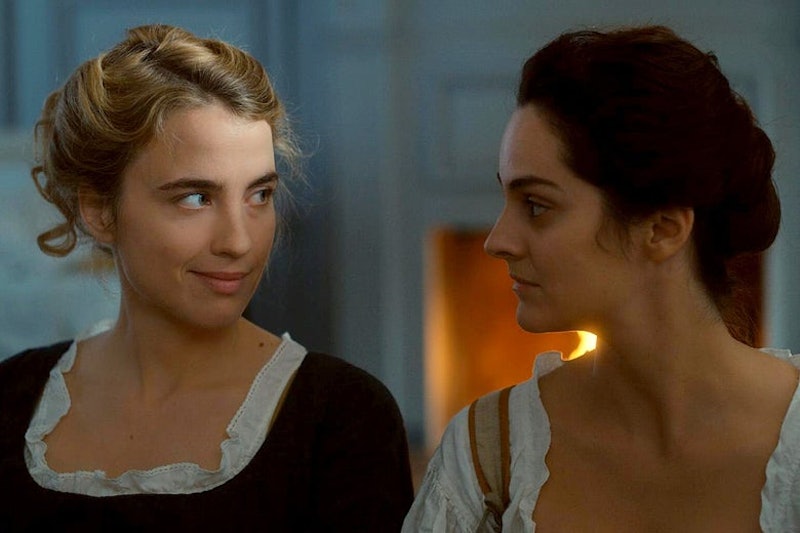 Lesbian cinema must check the following boxes in order to beguile queer audiences: the coupling of a light-haired woman and a dark-haired woman, ample glances, and the presence of wind. The model for this very scientific diagram, is of course, Phyllis Nagy’s Carol. Set in 1950s America, star-crossed lesbians Carol (Cate Blanchett) and Therese (Rooney Mara) must communicate yearning by gazing at each other across large rooms. Other greatest hits include Mulholland Drive, Imagine Me & You, and Freeheld, which is a bad movie, but is windy. And much like these filmmakers before her, Portrait of a Lady on Fire director Céline Sciamma — who is an actual lesbian — knew exactly how to hit us where it hurt. By giving us a queer period piece with enough glances to make us gird our loins.

Based on the research I’ve done from Being Gay, the way women express love and desire is typically… quieter. Take the shame we feel as a result of widespread homophobia and mix it with the shame all women have been made to have about our sexual desires, and you’ve got a shame casserole. So the way we communicate desire to other women is by staring at them silently, then walking away, ultimately never speaking. Glancing is our mating call, and thus should be the central thesis of every lesbian film.

My theory fits in snugly with Portrait of a Lady on Fire, which is set in 18th century France, a period that is both certifiably homophobic, yet also canonically lesbian. (It’s a time filled with French accents, gowns, and vaguely European rock structures: all of which are gay. This is just math). In it, Marianne (Noémie Merlant) has been commissioned to paint Héloïse for her wedding portrait, as Héloïse (Adèle Haenel) is to be wed in the near future to — plug your ears — a man.

However, Marianne must paint Héloïse without her knowing. She hates being painted, so she’s been told that Marianne was simply hired to accompany her on daily walks. So they walk, taking in dramatic coastal cliffs and chilly seas while the wind laps against their cheeks. All the while Marianne must silently study the intricacies of Héloïse’s face, body and fingers — seriously, there are numerous shots of Héloïse’s fingers — without Héloïse noticing. Tell me that plot wasn’t concocted miles underground in a top-secret lesbian film lair.

After many walks, Marianne finishes the painting. But she has become “fond” of Héloïse, so she burns the portrait in order to not betray her trust. When Héloïse finds out, she agrees to pose for Marianne, because she, too, has become “fond” of Marianne. And then… the glancing intensifies. Because now it isn’t just gay glancing, it’s lesbian art glancing. Sciamma delicately tracks these scenes with fragile shots of their silent desire. When they lock eyes over Marianne’s easel, the yearning is timid, but palpable.

Everything in Portrait of a Lady on Fire comes from such a severely abyssal place of queerness. Héloïse’s mom is the unsung hero of the movie, with her plucky one-liners and “step on me” energy. Sciamma is giving you landscapes, she’s giving you journaling, she’s giving you a shared appreciation of orchestral music. Hell, with the cliffs and the water and the sea and the bonfires, Sciamma is giving you all four elements: earth, water, air, fire. Fire, the most lesbian element, is even in the title of the film.

Only a queer woman could write and direct this kind of magnum opus on yearning. Do yourself a favor and go see it this Valentine’s Day, if not just to glance at another mysterious woman from across the movie theater. Do not speak to her: just yearn.

More like this
Reese Witherspoon Confirms This Fan Favorite Will Return For 'Legally Blonde 3'
By Jake Viswanath
'Knock At The Cabin' May Start Streaming Sooner Than You’d Think
By Jake Viswanath
What Is Mary J. Blige’s Net Worth? The 9-Time Grammy Winner Is Doing “Just Fine”
By Hugh McIntyre
Taylor Lautner Copped To Finding Jacob "A Little Annoying" In Twilight
By Stephanie Topacio Long
Get Even More From Bustle — Sign Up For The Newsletter
From hair trends to relationship advice, our daily newsletter has everything you need to sound like a person who’s on TikTok, even if you aren’t.