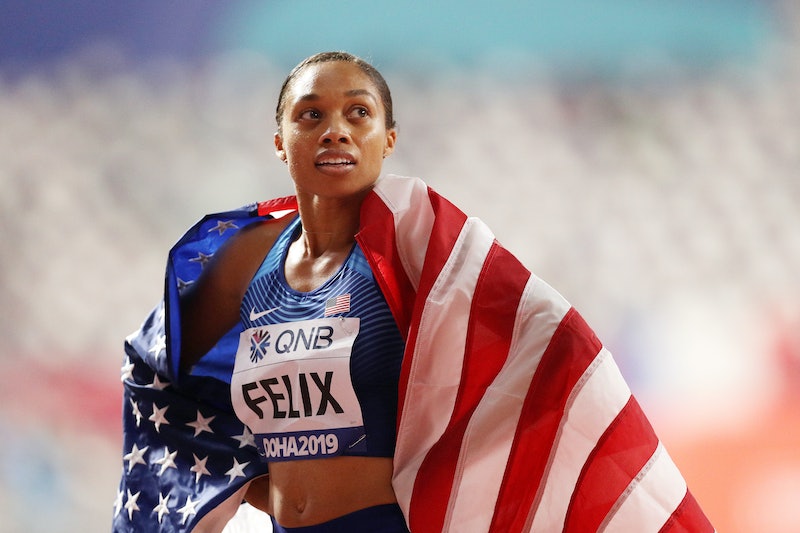 Being an elite athlete is hard enough, but coming back to professional competition after giving birth is, for some athletes, one of the toughest part of their job. It definitely doesn't spell the end of an excellent career; Serena Williams survived a life-threatening bleed in childbirth in 2017 and has since reached the finals of four grand slam tennis championships, while U.S. sprinter Allyson Felix has now broken Usain Bolt's record for most world championship titles, after giving birth to her daughter in November 2018. But if you're an athlete at the top of your game, does pregnancy hinder your career — or help it? In some cases, scientists tell Bustle, the postpartum period may provide an advantage for elite athletes — but it's definitely not the case for everybody.

It's important not to generalize about a postpartum performance boost for all athletes who've given birth, Dr. Kari Bø, a professor at the Norwegian School Of Sports Sciences and world expert on women's sports performance, tells Bustle. "I do not think we have good enough studies to come to a conclusion on this," she says. "There are several examples that a boost may happen, but it may also be the opposite for some athletes, given that they may give up sport and we do not hear their stories." However, there are various factors that may help some elite athletes in particular sports experience better outcomes once they've given birth.

"There are several positive changes, especially of the cardio-circulatory system, that occur during pregnancy, like a huge increase in blood volume," Dr. Bø tells Bustle. If you're an endurance athlete who does events like marathons, that blood volume could prove very helpful because it helps circulation of oxygen throughout the body. Dr. David James, a professor of exercise science at the University of Gloucestershire, explains that blood volume is increased by up to 40% in pregnant people. "That includes an increase in red cells by around 33%," he tells Bustle. Both blood volume and red blood cell levels stay high for some time after they've given birth, says Dr. James, and they're very helpful in endurance events.

There are other factors that can give an endurance athlete a physical advantage after birth. "Most athletes don't rest enough," says Dr. James. Resting before and after giving birth may help elite athletes recover and replenish their strength. Pregnant people also have enhanced levels of the hormone progesterone, and Dr. James notes that can provide some athletic benefits, like vasodilation or wider blood vessels, which helps performance by enhancing blood flow. People who train while pregnant also have an advantage: they get very hot and sweaty, which acts as a natural form of heat training. "Adaptations to heat stress are a benefit of training when pregnant," says Dr. James. People who are pregnant have higher body temperature, and if they choose to train while pregnant, they'll adjust to feeling hotter overall — which, if you're a marathon runner in hot weather, is a distinct advantage.

The adjustments don't necessarily last very long, though. "If the athlete has an uncomplicated pregnancy and manages to continue exercising at a moderate intensity, these changes are kept for approximately two months after childbirth, gradually diminishing during this period of time," Dr. Bø tells Bustle. However, if an endurance athlete's pregnancy and childbirth experience has been simple and unproblematic, and they get back into training afterwards, these benefits could help them reach great new heights — and, Dr. Bø adds, breastfeeding can also cause weight loss in some people, which can help endurance athletes increase their maximum oxygen uptake.

One of the possible benefits of childbirth for elite athletes, says Dr. Bø, isn't actually physical at all; it's psychological. Depending on their experience of pregnancy and birth, she tells Bustle, some athletes can experience a boost in their mood and energy after childbirth, which can make them more focussed and motivated during training. Some of this may be down to the hormonal spikes that occur when bonding with a new baby. "In addition, having a baby may also make them focusing on more than training and competition which may make them more relaxed, and positively enhance performance and competition," Dr. Bø says.

However, pregnancy and childbirth aren't a recipe for excellence for every elite athlete. Enhanced estrogen during pregnancy, Dr. James tells Bustle, can cause a problem called ligament laxity, which can increase the risk of injury. Complications during birth and the general exhaustion of being a new parent can also take a toll on performance. Dr. Bø adds that for endurance athletes, the postpartum period can also be a dangerous period. If these new parents don't get the proper nutrition, it might negatively impact their bone density. "The best Olympian skier, Marit Bjørgen, had two fractures of her pelvis during this phase, which indeed was a setback for her at that time," she says.

It's important to note that these benefits have also only been positively identified in endurance athletes, like Olympic triathlete Nicole Spirig, who came eighth in a triathlon only 12 weeks after giving birth to her third child. For people in other sports, the results of pregnancy may be very different. And if you're not an elite runner who trained throughout pregnancy, pregnancy can create issues when you step back onto the track. A study of female non-professional runners published in 2017 found many experienced musculoskeletal pain, stress urinary incontinence, and abdominal separation when they began running again after birth, even if they trained up until their third trimester.

It's clear that, for some athletes, the post-pregnancy period doesn't have to be one of reduced performance, but Dr. James explains that it's a highly individual process. "Providing training goes well postpartum, and has gone well late into pregnancy, there is a good chance that performance in the months postpartum could be improved," he tells Bustle. "There are a range of potentially positive and potentially negative factors, and ultimately it will be the balance of those that will determine performance potential." Every person's experience is different, but you can't say that pregnancy is the "end" of an athlete's career.

Dr. Kari Bø, Professor at the Norwegian School Of Sports Sciences

Dr. David James, Professor of Exercise Science at the University of Gloucestershire