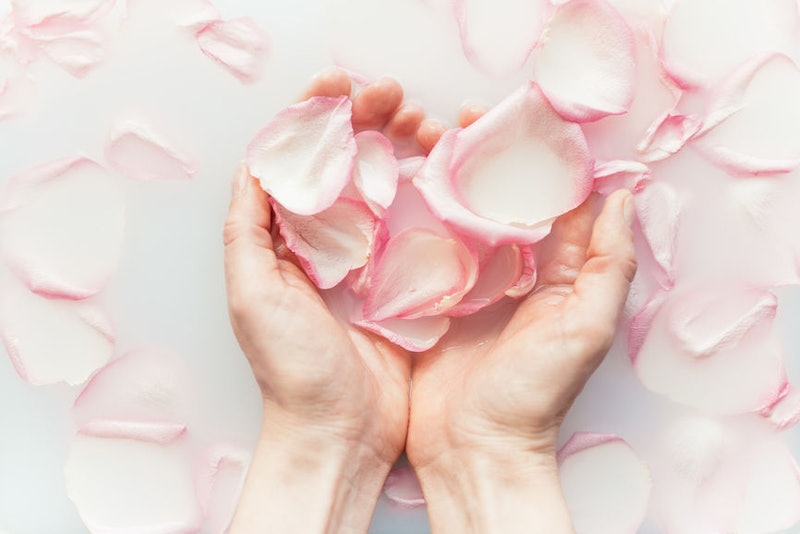 A bathtub is filled to the brim with warm water, red wax candles flickering on the sides. Rose petals form a thick crust on the water’s surface and a lone figure rests in the water, settled in up to her nose. She breathes in, and a quiet whisper is the only sound in the room.

She is practicing a love spell. She could be a witch of any denomination, race or background; love magick (the “k” is often added to make it clear the writer is talking about a serious, spiritual practice, and not stage tricks used for entertainment) is not limited to one path or belief.

Love spells in the magickal community are a fairly divisive topic, and conversations around practicing them ethically, if at all, are easy enough to find in online communities like Reddit, Instagram, Tumblr and even Tik Tok. In the last few years, the conversation has changed slightly as feminists express their frustration and push for social change by way of goddess worship, witchy iconography and protest signage, but in truth, witches have been talking about love spells for centuries.

Milana Perepyolkina, author of Gypsy Energy Secrets, draws upon Russian gypsy heritage and years of spiritual study to give insight into magickal ethics. She acknowledges that not everyone with similar heritage use the word “gypsy" but says her own history, and that of magick, is important.

Love spells have long been a part of magickal communities, she tells me, describing the "wise woman’s" role in society. In the past, a person might visit their local witch or wise woman and ask for a spell for a broken heart or to attract a new partner, but not direct the spell at a particular person.

However, others might visit a witch with less ethical methods and pay for a spell to make a certain person fall in love with them, with every intention to circumnavigate their target’s free will and ensnare their emotions. It didn’t matter if the person wanted to be in love, and they certainly would not have been asked for consent. For a certain amount of money or a favor, she says, an unethical witch would perform the ritual.

Because witchcraft has been around for centuries, conversations about ethics in magic are just as old as the craft. However, that doesn’t mean they are still the same. Perepyolkina and other witches agree that pop culture and feminism have changed the way the community talks about love magick.

Many expressed misgivings about spells directed at individuals because they violate free will and consent, but highlighted other types of more ethical love magick.

Love spells, both instructions and cautions, popped up online as soon as the internet was widely available. TeenWitch.com features a simple love spell, and states that one of its benefits is requiring the caster to place a rose under their partner’s pillow, because consent is likely already built into the situation. The article was posted in 1998 or 1999, although some updates to the site were made as late as 2006.

Today’s debates about love spells differ only in the number and type of people having them. Discussions about the effects of love spells from the perspective of those who were targets or their merits are easily found in witchcraft communities online. Teenagers on Tik Tok are also discussing ethical love magick, such as in this video with more than 36,000 likes in which the creator takes care to clarify in the comments that the spell was for self-love, and not directed at a target.

More than 100 practicing witches shared their thoughts in a 2019 survey I conducted about magick. Of the respondents, 63% said they had cast love spells in the past, but 87% said they no longer do. Many expressed misgivings about spells directed at individuals because they violate free will and consent, but highlighted other types of more ethical love magick.

Lisa Walling, a spiritual adviser with 30 years of experience who responded to the survey, says she practiced magick as a teen and her first love spell was not entirely ethical. (It "backfired spectacularly.") As she grew older, she gained more experience and developed a magickal code of ethics. She thinks movies, songs and media have created negative perceptions of spell casting.

“I have to tell [people] that even Cinderella's famous fairy godmother just made her look extra nice, and helped her with her confidence,” Walling says. "Cindy did all the real work."

Herrera, a sexual assault survivor, uses self-love magick like massage and ritual baths to heal herself and manifest in her life. She says that after performing love magick to manifest lovers in her life, she needed to switch her practice and focus on herself, because she was unprepared for the new people those spells brought into her life.

“As a survivor of sexual violence and a crisis worker, centering my own pleasure in a safe and intentional way has been very healing and empowering,” Herrera says.

Herrera is staunchly opposed to love magick that could violate consent, and cautioned new practitioners to ask themselves if their target would feel the same way without a spell cast on them. If not, Herrera says, the practitioner is crossing a very important line.

Some sexual assault activists and experts hold the same boundaries on love spells — and how they could be considered assault — or at the least, forgoing proper consent. Kristen Houser, Chief Public Affairs Officer at the National Sexual Violence Resource Center, points out that how you cast a spell makes all the difference.

"If the person on whom you are casting the spell has already drawn a boundary and expressed a lack of interest... then the spell is unethical, manipulative and abusive," Houser says. "[But] if the intent is to create an opportunity to see if something organic happens that seems pretty harmless."

"There’s no doubt about it that what’s happening in our current political and cultural climate trickles down to the magical community."

Houser says it’s important to make sure the person on the receiving end of the spell is able to exercise free will, and not to interfere with their right to choose and act independently.

Lisa Marie Basile, author of Light Magic For Dark Times, bridges the gap between those experts and conversations that include feminism with love spells and magick. Because she is an active writer, feminist and witch, her work contextualizes the way love spells have evolved, and are still changing.

Like Perepyolkina, Basile agrees that self-love spells or general attraction love magick is best, and describes the bath spell mentioned at the beginning of this story. She says public and media-driven conversations about assault, consent, and feminism shape the magical community as well.

"There’s no doubt about it that what’s happening in our current political and cultural climate trickles down to the magical community," Basile says. "We’ve all been thinking about it so much, and it’s all over the news."

These deliberations on magickal ethics are important, but what happens if someone has already performed a spell? As the survey indicated, more than 20% of witches who have practiced love spells previously no longer do, and many said their reasons include consideration of consent.

"The beauty of magic is that it is all about choice."

Perepyolkina says there are simple spells which may undo the harm caused, such as tying and untying a knot in red string while apologizing for the act. For victims, she says, there are rituals that involve meditation and salt cleanses.

These fixes, however, may not be enough to put others’ minds at ease. Jude Valentin, activist, feminist and magic practitioner, says that even after a spell-breaking ritual, she did not think a relationship with someone who had targeted her would ever be as trusting.

"I would feel violated," Valentin says. "The beauty of magic is that it is all about choice."

Valentin, who is also a bruja, says witches and magic practitioners have debated ethics in magic, which includes love spells, for decades. It’s clear the history of ethics in magic goes back much further than #MeToo, but that doesn’t mean it isn’t changing.

There may always be witches who try to bend the universe to their will regardless of outcome, but there are many who carefully consider their actions and design their practices with mindfulness. As Walling, a respondent in the witchcraft survey says, it’s important to learn from our mistakes — and prevent harm whenever possible.

"Be mindful of any consequences, wasted resources, karmic effects, and take the hard lessons," Walling says. "Learn and get better."

More like this
'Mayfair Witches' Already Changed 2 Major Characters From The Books
By Grace Wehniainen
24 History-Making Black Women You Probably Didn't Learn About In School
By Ayana Lage and JR Thorpe
25 Inspiring Quotes From Black Women To Celebrate Black History Month
By Kyli Rodriguez-Cayro and JR Thorpe
Prince Harry Incorrectly Recites Christina Aguilera’s “Genie In A Bottle” Lyrics
By Jake Viswanath
Get Even More From Bustle — Sign Up For The Newsletter
From hair trends to relationship advice, our daily newsletter has everything you need to sound like a person who’s on TikTok, even if you aren’t.