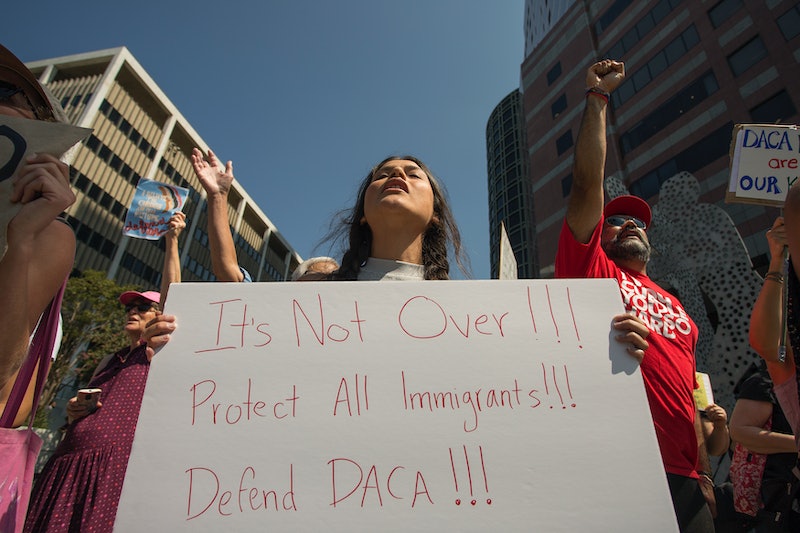 I was brought to the United States when I was 6. And because I was 6, I had no say in my parents' decision to come here. I was 6, so I never questioned their choice. I was 6, so I didn't know if they came here with papers or without. Luckily, they did.

But had they not gotten papers, it still would've been out of my 6-year-old hands.

Last week, the Trump administration announced it would end the Deferred Action for Childhood Arrivals program after six months. The program allows undocumented young people who were brought here as children — like I was — and have no criminal record to be temporarily shielded from deportation and allowed to work, drive, study, and pay taxes legally. Condemnation was quick, with leaders all over the world voicing their disgust for the president's "irresponsible and immoral" decision. Hours later, Trump took to Twitter, suggesting he might change his mind again in six months:

Congress now has 6 months to legalize DACA (something the Obama Administration was unable to do). If they can't, I will revisit this issue!

"Throwing hundreds of thousands of lives into the worst kind of uncertainty is not compassion."

On Wednesday evening, the whiplash began all over again. House Minority Leader Nancy Pelosi and Senate Majority Leader Chuck Schumer said that they had struck a deal with Trump to "enshrine the protections of DACA into law quickly," only to have the White House dispute the claim, saying DACA was "discussed," but an agreement was not made. Trump followed up by asking:

Does anybody really want to throw out good, educated and accomplished young people who have jobs, some serving in the military? Really! ... They have been in our country for many years through no fault of their own - brought in by parents at young age.

The hypocrisy here is thick. Time and time again, Trump has expressed his "compassion" for DACA recipients. Right after announcing his administration would end the program, Trump said, "I have a great heart for the folks we are talking about, a great love for them." But throwing hundreds of thousands of lives into the worst kind of uncertainty is not compassion. Ending a program that helped 800,000 young people finally find a sense of security is not compassion. Leaving DACA holders and their employers in limbo — fearing for their families and futures — is not compassionate.

This entire episode shows that Trump sees immigration policy as a game and DACA recipients as his pawns. Trump's M.O. is to exclude as many people as possible, animating his base by targeting anyone and everyone who doesn't look or sound like them. He did this with his travel ban, issuing a poorly thought-out and illegal edict that trapped mothers in airports and children in war zones. He did the same thing with his transgender military ban, calling into question the careers and dedicated service of thousands of men and women in who selflessly served our country.

Marginalized communities are nothing more than a bargaining chip to him, but "the other" is not some abstract entity — the lives of brothers and sisters, friends and co-workers, neighbors and lovers, are at stake each time he tweets his injustice du jour.

"It's unconscionable for Trump to toy with people's lives this way."

Can you imagine what it's like to learn you were out of the job via an iPhone notification? For an armed ICE agent to be waiting for you at the airport, instead of the son you had been waiting 20 years to hug? Can you believe the only country you've ever known would encourage you to come out of hiding, promise you a path to citizenship, only to renege — and replace your college degree with the fear of inevitable deportation, financial ruin, and the loss of your friends and family?

Some people have been quick to welcome Trump's "bipartisan" efforts to save the 800,000 DREAMers — but the damage has already been done. It's unconscionable for Trump to toy with people's lives this way; he is nothing more than a spoiled child ripping the wings off a butterfly, and then demanding a pat on the head for letting the creature crawl away.

Trump should not to be praised for righting his own wrongs; if we don't stop him now, he'll never stop using people as pawns. And that's a lesson every 6-year-old knows, even the ones without papers.