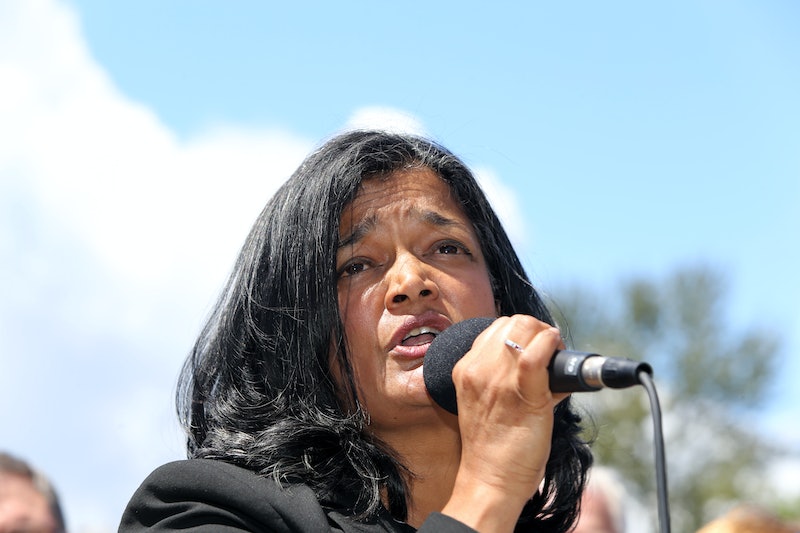 One congresswoman from Washington state has a message on immigration, and it's heartbreaking. After going to one of the immigration detention facilities to speak with parents who have been separated from their kids, Rep. Pramila Jayapal described detained immigrant mothers, and what she had to say is beyond belief.

On Saturday, Jayapal went to a Federal Detention Center in SeaTac, Washington — not far from the Seattle-area SeaTac airport — to check on how the undocumented women were doing. What she found, spending some three hours with 174 women and 32 men, was shocking. Jayapal released a statement and a video message on the matter, saying:

What I heard from the women today being held at the detention center was heartbreaking. They are there only because of the Trump administration’s cruel new "zero tolerance" policies of family separation. They spoke of fleeing threats of rape, gang violence and political persecution. They spoke of their children who have been killed by gangs and their fear of being raped. The mothers could not stop crying when they spoke about their children — young girls and boys who were taken from them with no chance to say goodbye and no plan for reunification.

The Trump administration policy that Jayapal referenced was announced in May by Attorney General Jeff Sessions, but it may stretch back even further. A report by The New York Times in April placed the number at at least 700 children taken from their parents. President Trump, meanwhile, has not explained his administration's position, but has instead tried to blame Democrats for passing a law. There is no such law.

"What I saw was absolutely horrific — what I saw and heard," Jayapal said in a video that she uploaded to her social media accounts. The representative's press release included some data on the women she spoke with.

The women were from 16 countries but they largely came from Cuba, El Salvador, Honduras, and Guatemala. One-third of the women said their children were taken, and the ages of the kids were from 1 year to teens. Those who were separated from their kids had no idea where their children were. And the average detention ranged from two weeks to over a month.

Jayapal also described the conditions of the detention center and other federal facilities:

The women talked of being held in Border Patrol facilities that they termed the "dog pound," because of inhumane fenced cages, and the "ice box," because temperatures are frigid and detainees are given no blankets or mats. They also spoke of lack of access to food and water, and said they suffered humiliation and verbal abuse from border agents who called them "filthy" and "stinky," and told them that their "families would not exist anymore" and that they would "never see their children again."

"What I saw today is simply not who we, as a country, should be," Jayapal said in her statement. "This is cruel and inhumane treatment and we cannot allow it to continue on our watch.” She called on the Trump administration to start quickly processing asylum claims and to immediately reunite these women with their children.

Jayapal was joined by other Democratic politicians from Washington state in denouncing what she saw. Gov. Jay Inslee, who joined in Jayapal's protest outside the detention center also spoke out. “We’ve gathered here to say one central message: Cruelty to children should not be part of American policy,” Inslee told those gathered. “America is better than this. Inhumane, callous indifference and willful injury to children must stop.”

Jayapal's account gives voice to what these immigrant mom's are facing, and she and others from Washington are determined to act.