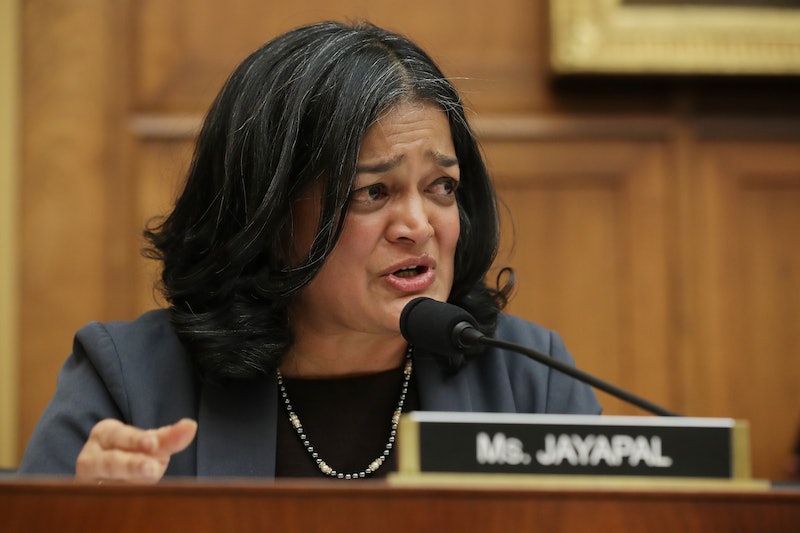 On Tuesday, the House Judiciary Committee held a hearing to discuss the Equality Act, a piece of legislation that would provide federal civil rights protections to members of the LGBTQ community. During the Equality Act hearing, Rep. Pramila Jayapal shared an emotional story about her child, who she said identifies as gender non-conforming. Jayapal told committee members that her child came out to her last year, and described how that revelation changed their relationship for the better.

"Over the last year, I have come to understand from a deeply personal mother’s perspective... what their newfound freedom —which is the only way I can describe what has happened to my beautiful child — what their newfound freedom to wear a dress, to rid themselves of some conformist stereotype of who they are, to [being] able to express who they are at their real core," Jayapal said, according to video footage circulated on Twitter.

The Equality Act would make it illegal to discriminate against LGTBQ people in employment, housing, education, and other areas, according to NBC News. The bill was first introduced in 2015, but has not yet gained the support it needs to be turned into law.

Stephen Peters, a spokesperson for the LGBTQ civil rights group Human Rights Campaign told CNBC that support for the legislation has grown over the years. Specifically, Peters said, the bill has gained a lot of corporate backers.

"More and more companies have come to realize just how important it is to have a nationwide standard that treats all employees equally, no matter where they live," Peters told the outlet.

During Tuesday's hearing, Jayapal described her child, who, she said, "has always done well in school, but [who] has carried what a mother can only describe as a heavy burden of conflict in their own being, that I could not fully identify or help to express."

Jayapal spoke through tears as she shared the way her child had changed since sharing that they identified as gender non-conforming.

"Since this deeply impactful moment last year, my child's embracing of their non-conforming gender identity and all that it has allowed, all that it allows, in terms of their creativity, their brilliance, their self expression — the only thought I wake up with every day is my child is free. My child is free to be who they are," Jayapal said.

Jayapal went on to say that it was up to lawmakers to help codify protections ensuring that all people are able to experience that freedom. Specifically, she said, it "comes a responsibility for us as legislators to protect that freedom to be who they are."

The bill's advocates have argued that it is necessary to protect members of the LGBTQ community from discrimination and harassment, which they say remains a problem in 2019.

“LGBTQ Americans still face real and persistent discrimination in their everyday lives, and their rights should not be determined by what side of a city or state line they live on," Human Rights Campaign president Chad Griffin said in a statement about the Equality Act.

If the Equality Act passes in the House, it would be up to the Senate to send it to the president's desk. It's future remains uncertain there, but the bill's advocates seem optimistic in the midst of the potential law's renewed support.