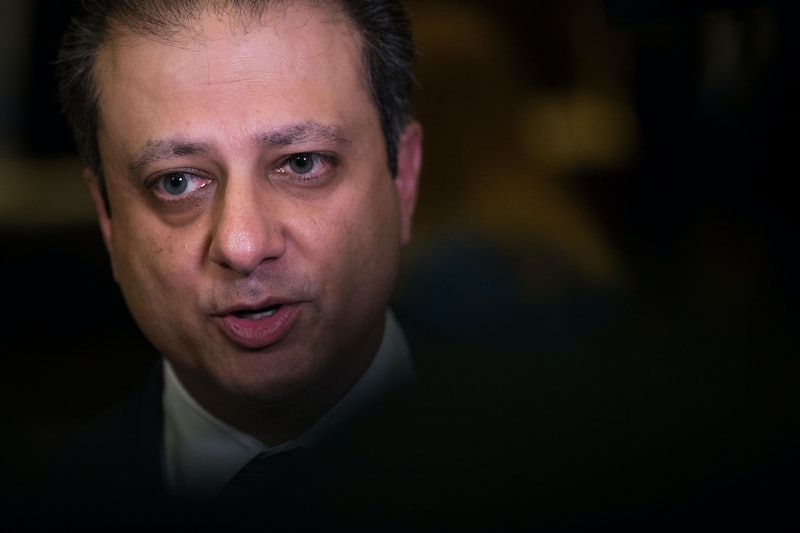 On Friday, the Trump administration's Justice Department shook up the ranks of the U.S. Attorneys in a big way, unexpectedly requesting the resignations of 46 prosecutors. While the resignation requests are far from unprecedented for a new administration, the abruptness was unusual, as was the fact that Manhattan U.S. Attorney Preet Bharara was also asked to resign, despite reportedly having previously been asked by Trump to stay on. He refused to comply, forcing Trump to fire him, and now he's spoken out: Bharara reacted to his firing in a statement on Saturday, calling his time serving as a federal prosecutor "the greatest honor of my professional life."

Bharara, 48, was a high-profile New York prosecutor from 2009 through 2017, and in the weeks following the election, it was reported that Trump had requested he continue on in that job. According to The New York Times, two White House officials claimed the late November request was aimed at forging a working relationship with Democratic Senate Minority Leader Chuck Schumer, for whom Bharara once worked as a top aide. Now that Trump and Schumer are engaged in open hostilities, the unnamed sources told the Times, Bharara's name once again landed on the chopping block.

Here's the statement Bharara sent out to the media following the news. He also tweeted on Saturday afternoon to clarify that he did not resign, which forced the administration to fire him.

Today, I was fired from my position as U.S. Attorney for the Southern District of New York. Serving my country as U.S. Attorney here for the past seven years will forever be the greatest honor of my professional life, no matter what else I do or how long I live. One hallmark of justice is absolute independence, and that was my touchstone every day that I served. I want to thank the amazing people of the Southern District of New York, the greatest public servants in the world, for everything they do each day in pursuit of justice. They will continue to do the great work of the Office under the leadership of Joon H. Kim, the current Deputy U.S. Attorney, who will serve as Acting U.S. Attorney.

Bharara was well-known for his penchant for investigating and prosecuting powerful figures, regardless of the political backgrounds involved ― his political targets in New York City government ranged from Speaker of the State Assembly Sheldon Silver (a Democrat) to State Senate Majority Leader Dean Skelos (a Republican).

To say nothing of the fact that he investigated the office of the state's Democratic governor Andrew Cuomo, too, as well as a number of Wall Street megabanks. At the time of his firing, he was also reportedly investigating Fox News for how it handled structured settlements stemming from the multiple sexual assault allegations that ended CEO Roger Ailes' tenure at the channel.

In short, Bharara's general reputation was exactly the sort that Trump should've wanted to further his "drain the swamp" ethos, if swamp-draining were actually the goal. It's yet unclear what next career step Bharara will take ― there's been speculation in the past that a political run could be in his future ― but considering his stature and high-profile achievements in office, it seems clear that he'll have options.