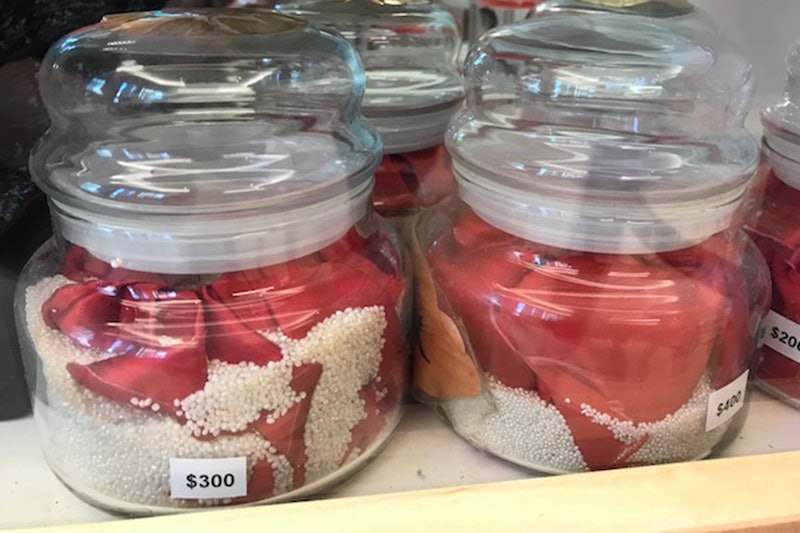 If I were to line up next to my sisters, the difference is immediately noticeable: where my skin is a bit patchy and unmemorable, their skin radiates. Both of their faces have a discrete, poreless glow, and I’m certain you could bounce a kernel of rice off their cheeks. The frustrating thing is, they don’t do anything differently than what I do for skin care. We all grew up eating the same things, doing the same extracurricular activities, and exercising the same mindful skin care regimens. To this day, we still use the same night creams. But our mother traces the difference to one thing she did before each of us was born: She had eaten pearl powder while she was pregnant with them but had skipped it with me.

The practice of eating pearl powder — actual freshwater or saltwater pearls pulverized into a fine powder — is popular among wealthy Chinese women. Many will point to both their own immaculate skin and their children’s as proof that the millennia-old practice works. Traditional Chinese medicine (TCM) practitioners I spoke with (who did not feel comfortable being identified in this article for cultural reasons) in California’s San Gabriel Valley area said that pearl powder has been used for centuries by pregnant women to give their future children the best skin possible. Many women often seek out a Chinese medicine practitioner to formulate a personalized recipe that would combine pearl powder with other Chinese medicine ingredients for optimal results specific to her body and its needs. My mom first learned about the practice from a wealthy friend, who swore by its effects. His children, of course, had enviable skin.

According to these TCM practitioners, pregnant women are to only eat their custom Chinese medicine remedies at specific times during pregnancy, as determined by the practitioner's assessment of the woman and her health. For my mother, she could only begin eating pearl powder after her first trimester. Separately, as a beauty supplement for women, TCM practitioners also say pearl powder can enhance elasticity and repair past damage to produce luminous skin.

"Over 90 percent of [pearl powder] is calcium carbonate,” Steven Given, a licensed acupuncturist and associate dean at the American College of Traditional Chinese Medicine, shares with Bustle. Calcium carbonate supplements are often taken in efforts to improve bone, muscle, and nervous system health. And according to the online archives of China Medical University, a college focused on training students in the practice of traditional Chinese medicine in Taiwan, pearl powder can be also used as an anti-inflammatory and detoxification treatment (claims which have also been investigated in more modern science, such as in this study published in the Journal of Cosmetic Science in 2010).

But practitioners say pearl powder often has to be used in combination with other Chinese medicine ingredients, such as the herb notoginseng, to see the best effects. And it’ll be a painful credit card swipe — at one Chinese medicine shop I visited in Arcadia, an ounce of pure pearl powder can cost up to $800. The pearls are in a bottle, ready to be measured out, and the store associate crushes the beads right in front of you. 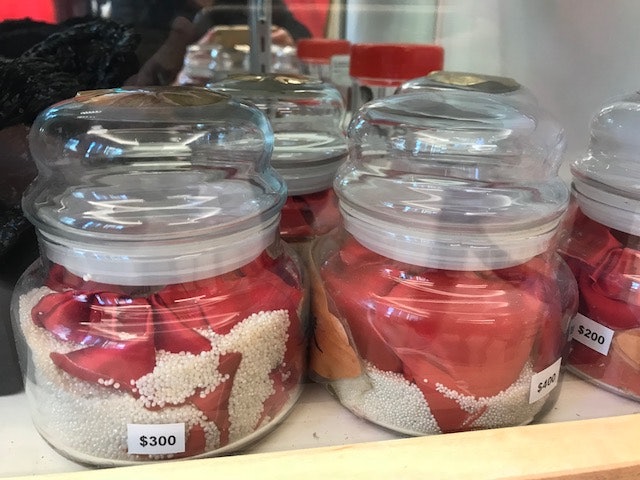 Historians trace the practice back to more than 1,500 years ago in ancient China. According to Lisa Eldridge's Face Paint: The Story of Makeup, the Empress Wu Ze Tian was famed for using pearl powder during the 7th century to achieve her famous complexion. The Epoch Times, an independent Chinese-American newspaper, wrote about ancient folklore telling of the empress’ steadfast routine in which she ingested one small spoonful of pearl powder before bed every 10 days. The empress was said to have the youthful skin of a teenager well into her 60s.

The practice can be both internal and external; pearl powder can be mixed into a concoction to be ingested or into a topical mask. One of these Chinese medicine shops that I ventured into did sell kits of “pure pearl powder” for a surprisingly low price: $14 for a set of miniature vials. The price difference obviously raised an eyebrow (“pure,” was it?). Still, I could afford $14 for beauty research, so I bought the red kit and tried out the pearl powder as a face mask to see if it made a difference on my skin at all. 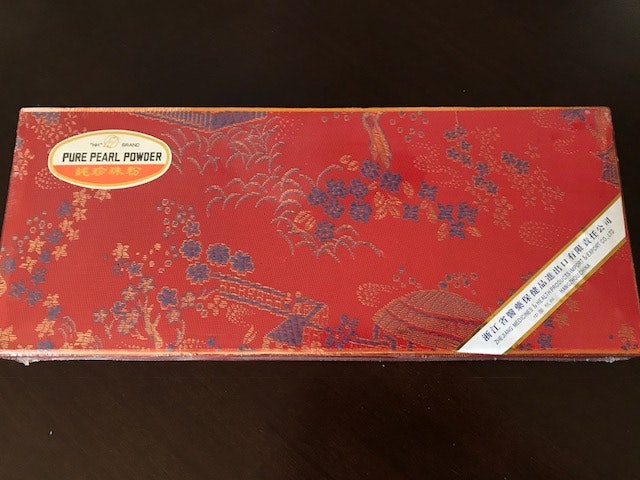 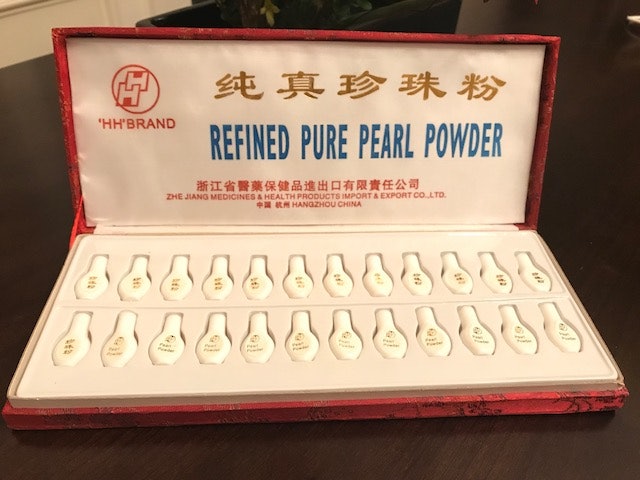 At the shop associate’s suggestion, I mixed the powder with yogurt thoroughly (mixing it with honey would have been acceptable as well). After pouring a dollop of plain yogurt into a small bowl, I sprinkled out an entire vial, gently stirring it into the yogurt. Then, I let the mixture dry on my face, about 15 to 20 minutes, before rinsing it off. 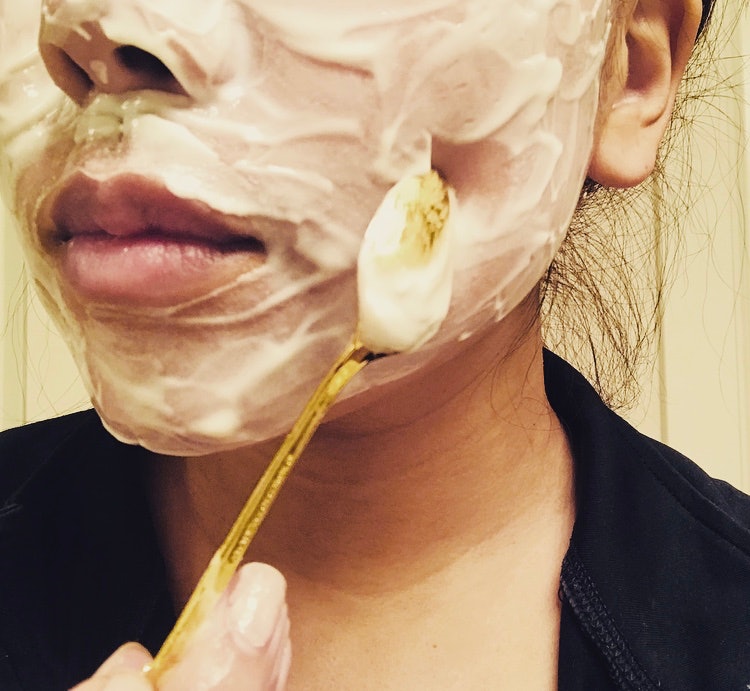 The result? Pretty soft skin. My cheeks definitely looked a little less red, and my face glowed just a bit more the rest of the day. It was nice. Though, I'll bet my face would have been able to take the job of a lighthouse with the $800/oz stuff.

Still, American medicine has little to offer in the way of scientific research on the health and beauty effects of pearl powder. While Dr. Given recommends pearl powder for its medical uses, he classifies some of the beauty claims, especially with pregnant women and their children, into the Chinese tapestry of "folk medicine," cultural treatments and remedies passed down through generations of tradition rather than modern scientific practice.

"It may brighten skin via tyrosinase inhibition...[by] inhibiting the production of unwanted pigment (brown spots)," said Dr. Anna Guanche, a board-certified dermatologist and owner of Bella Skin Institute in Calabasas, via email. "There is an older study from Taiwan in the journal of cosmetic science saying it is rich in nutrients. The powders most likely work as a physical UV blocker...the claims are skin brightening, anti-aging, and pigment reduction. It looks like a beauty trend, but there needs to be a lot more study as far as I can see."

As with much of Eastern medicine and supplements, pearl powder and its effects have not been tested by the FDA. But, if you were to say that to someone at a Chinese medicine shop, you’ll only get a salty return: “There are thousands of years worth of research and proven results in Chinese medicine. Do you know something they don’t?”

More like this
The 12 Best November 2022 Beauty Launches, According To Our Editors
By Rachel Lapidos
All The Products Hailey Bieber Used For Her Birthday Makeup Look
By Olivia Rose Ferreiro
10 Makeup, Hair, & Skin Care Gifts That Beauty Lovers Will Drool Over
By Erin Stovall
Superdrug Now Sells UOMA’s Sister Brand
By Justine Knight
Get Even More From Bustle — Sign Up For The Newsletter