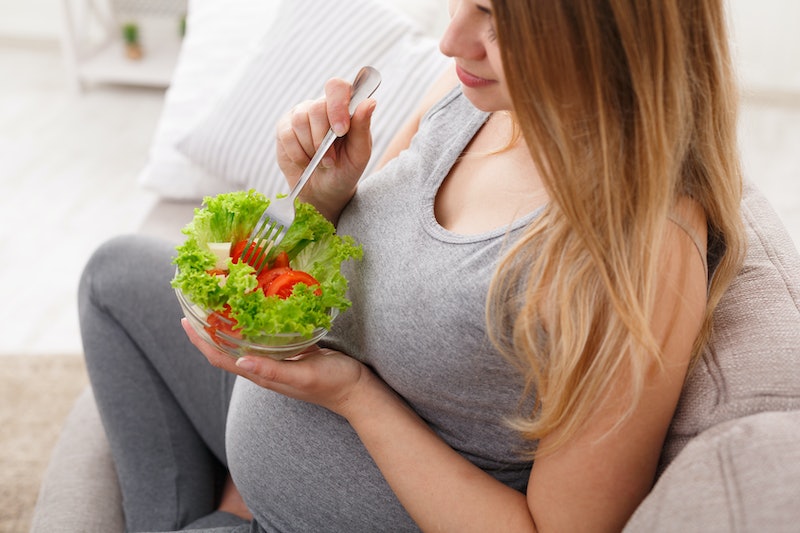 Intermittent fasting has been making waves of late as a new, occasionally controversial health fad. The method has been touted as a way to allegedly improve your immune system, with some dietitians noting responsible fasting could also boost your stem cell levels and lower your risk of heart disease. But some experts say the intermittent fasting diet may pose a danger to pregnant women, so if you're expecting, it's best to stick to a regular feeding schedule.

PopSugar spoke with two physicians about intermittent fasting, both of whom said women should bypass the practice when pregnant. "Most medical providers feel research is very inconclusive on fasting during pregnancy and should be avoided," Luiza Petre, a cardiologist and nutritionist, told the website, noting that some research has shown fasting for religious purposes could affect a baby's birth weight. "There is no health stamp that can be assigned to any diet during pregnancy because most diets are unethical to perform on pregnant women [for study purposes]," she said.

There are a number of different forms of intermittent fasting, some of which are less controversial than others. PopSugar recently published a roundup of five types of intermittent fasting, with one type — a 16/8 diet — earning some support from a dietician. The 16/8 method suggests utilizing a 16-hour fasting window and an 8-hour eating window, so, for instance, you could eat two or three normal, healthy meals from 11 a.m. to 7 p.m., and then refrain from eating overnight. Other methods of intermittent fasting include severely limiting calories on certain days, fasting for a full 24 hours once a week, or fasting all day and eating only at night, though nutritionists warn that those methods could overly stress women's bodies.

One of the advertised benefits of intermittent fasting is weight loss, though some nutritionists say occasional fasting days have other benefits, like the aforementioned immune system improvement and cardiovascular disease risk decrease. But it is dangerous for most pregnant women to lose weight, for one thing; it's also necessary, sometimes, for pregnant women to have small snacks to keep themselves from feeling ill during the day, and also to maintain their blood sugar.

Dr. Christopher Grady, an OB-GYN PopSugar spoke to, recommends pregnant women eat regularly and follow balanced diets to keep themselves healthy. Grady said pregnant women should focus on high-fiber whole grains, veggies and fruits; avoid refined foods and foods high in sugar, stock up on protein, and drink extra water. In fact, Grady noted pregnant women in their second and third trimesters should take in an extra 300 to 500 calories a day, provided their doctor gives the go-ahead. "The problem with dieting (with the exception of a gestational diabetes diet) is that the proper amount of calories, protein, carbohydrates, and even fats may not be taken in," he said.

Intermittent fasting joins a slew of other fads not recommended for pregnant women, including getting gel manicures, and whitening your teeth. But it's not just pregnant women who should be mindful about not skipping meals. Nutritionists warn that not getting enough calories could mess with women's hormones (and throw off your period!), mess with your natural metabolism, and make you more perceptible to food intolerances with things like lactose and gluten.

Worse, focusing on food intake can make you obsessive about what you eat. This is particularly problematic if you already have a history of disordered eating, in which case you should skip intermittent fasting altogether. But even if you don't, there are other, potentially healthier ways to reboot your immune system, like incorporating exercise into your daily routine, eating lots of fruits and vegetables, and getting seven or more hours of sleep per night. Note that it's a good idea to consult with your doctor before starting any new exercise regime or eating plan, whether or not you're pregnant.