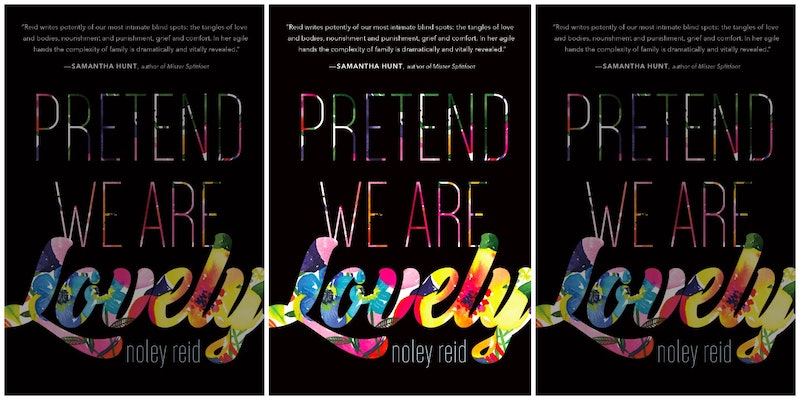 In Noley Reid’s debut novel, Pretend We Are Lovely — out July 18, from Tin House Books — it’s the summer of 1982, and in Blacksburg, Virginia, the Sobel family is entering a season of starvation, obsession, guilt, and indulgence; one that will either solidify or break their bonds, possibly forever. Tate, a philosophy professor at a local college, toys with the last days of an underwhelming affair with a student. Francie, his wife, is a guilt-ridden mother of three (two, living) who wavers between deadly starvation and compulsive binge eating. At the center of it all are daughters Enid and Vivvy — ten and thirteen, respectively — who observe their parents’ every move, perhaps too closely for their own good.

Unfolding over the sticky days of a single summer and fall, Pretend We Are Lovely navigates the complicated waters of eating disorders and mental illness, parental guilt and the sometimes-fragile bonds of sisterhood. Earlier this month, debut novelist Noley Reid took some time to dive into all of these issues, and more — including her own battles with body image and sizeism — with Bustle.

“I never connected my dieting and bingeing with Francie’s dieting and bingeing. Now that seems absurd, really,” says Reid. “How could I not see the similarities: her hang-ups, the reverence we both shared for our scales, and terror at the thought of kissing beautiful clothes goodbye? I began this book as a short story about two sisters who dangle and swing from the pine tree in their yard. They had a large, hairy dog and a mother who was most happy leaving them to go ‘play tennis.’ [Francie’s euphemism for compulsive exercise.] Had my own life been more evenly keeled, the book would probably have stayed a short story about the girls. So that’s one good thing to come out of my nervous breakdown.”

Outside the text of the novel, Reid includes a note to her readers, in part explaining her own journey with body image, writing that Pretend We Are Lovely began, for her, as “a narrow crack of light.”

“I’ve taken so much from that time,” says Reid, referencing her own history with disordered eating. “There’s a hubris that comes from walking around this world as a 5’6”, 106-pound woman in full control of all her appetites. And a great shame that comes from walking around at 326 pounds. In the wake of both, I have a much stronger sense of humility, empathy, and perspective. I also know that I can come back from what feels like total despair, and that it will not finish me. I don’t write in order to heal but I do think the act of creating something vibrant and whole from the messy loose ends of the darkest time of my life becomes a salve to those hurts, and lends me insight on those pieces of me contained in the book.”

Each of the characters in Pretend We Are Lovely struggle with consumption and starvation, denial and indulgence — and each manifest in different ways: both physical, emotional. While Francie and Vivvy restrict and obsess over their caloric intake, Evie frantically hides her own eating from their near-constant judgement. Tate often tries to address his family’s emotional needs by meeting physical, nutritional ones.

“I think a great deal about feeding and starving, physically and emotionally — think about it all the time, really,” says Reid. “As a mother, I want to give my son a fullness of heart that I didn’t feel as a kid. I parent in direct opposition to how my father parented, so no foods are forbidden, my son eats when hungry and doesn’t eat when he’s not, and there is no body-shaming. My father was a strange combination of effusive love and constant, biting criticism. I have not seen him in 10 years yet I still find it difficult at 43 to believe any kindness in the world isn’t also code for brutality. I think I always will. As a wife, I hunger to feel secure, loved, and desired. My husband is kind and gentle, and has loved me at my lowest weight and at my highest. But we are both born to a culture that prizes the former, and ridicules and infantilizes the latter, and we are sometimes shockingly human when it comes to overthrowing the paradigm.”

In the novel, as Francie begins to spiral out of control — taking her family with her — it’s hard to know what she needs more: emotional support, or physical sustenance. Her needs become so great, it often seems impossible to offer her both, simultaneously. I ask Reid what she thinks we need to feed first: our bodies, our minds, or our hearts?

“It will come as no surprise that what I am certain must be fed first and always is our hearts,” she says. “If not, we risk an incurable failure to thrive, a great yawning absence within that can never be fully satisfied.”

Francie has been both fighting and feeding her disordered eating for nearly 10 years — fueling much of her confusion, anger, and guilt over the death of her mentally ill son into controlling her body. She’s in too much pain herself — even abandoning her daughters to spend days laying on top of her son’s grave — to see how her own disordered actions are disrupting her whole family.

“I don’t see Francie as a bad mother, though she is of course,” says Reid. “In her tunnel — weighing out every calorie she’ll consume, secretly over-exercising, driving past a doughnut shop just to feel the strength of her resolve — she has such limited vision and it’s trained on refusal, the body fasting, the body worn away. When she picks her head up to see her daughters in the room, or her husband Tate, all she can see is the ways they fit or do not fit her vision.”

And fitting within the confines of that vision is critical for Francie to allow herself to give affection, love, and acceptance; recognizing Vivvy for her denial and shaming Evie for her consumption.

“At the time when I could no longer maintain my own food austerity, I lived alone,” Reid says. “Now, I can only imagine how adding my family’s fears and needs into the warring drives within me would have turned out. The grief and mourning and rage — I wouldn’t want to visit these upon them and, if Francie had the faculties to think clearly, she would never want to visit her own upon her family either. I’m not trying to let Francie off the hook; she is often cruel, cold, and aloof when what her family needs is soft love and acceptance. Francie causes deep and lasting pain in Enid and Vivvy, and this is inexcusable. But she is human and I don’t think we as a people will accomplish much if we cannot see that Francie is hurting, too.”

In many ways Francie’s relationship with herself and with her daughters depicts a microcosm of what happens to most women today, regarding body image and size-shaming. Thinness — and Caucasian thinness, in particular — is rewarded, while any body existing outside that slender realm is subject to varying degrees of criticism, assault, or silencing. When I ask her about this, Reid takes a long view.

“It wasn’t always this way, right? Zaftig bodies weren’t stigmatized — were even prized — until the second half of the nineteenth century. That acceptance of an ample woman feels as far removed from our world now as powdered white wigs and fancy velvet high heels do for men today,” says Reid. “There are all kinds of exciting changes taking place in the way our culture assigns and codes gender, but these are still fringe efforts and fat women are still under fire. Fat men, too, but men’s bodies don’t belong to the public like women’s bodies do.”

Though true, it’s hard to imagine that what Reid describes existed only 70, maybe 80 years ago. A world where my self- and social-worth isn’t somehow tied into the size jeans I wear, or how my arms look in a sleeveless top — I don’t even know who I’d be there. Who would France, Vivvy, and Evie be in that world, and where would all the energy they dedicate to body image direct itself, instead?

Reid, however, fits sizeism, and cultural preoccupation with women’s bodies into a larger social and political construct.

“What power have we had to rail against it?” she asks. “Property and voting rights for women are in their infancy here and aren’t yet global. Being born into an atmosphere of possession, women have had to fight not only the laws but their internalized principles. Little deaths in slow increments over history, that is how cultural wars have been fought. Efforts to reclaim and un-shame large bodies are making a difference within individuals who seek them out. Blogs and vlogs that make public the once entirely invisible, empowered fat body, are gaining larger and larger audiences. Authors like Roxane Gay and Lindy West have moved this fringe discussion into mainstream venues. And I believe some readers will start to think differently about the human body’s many shapes and even, maybe, about their own body’s shape. Looking at the comment threads to online essays by or about these impressive writers, I can’t help but feel large women will always be deemed repulsive. But what if I were a kid now? What if I were Enid at age ten in 2017, instead of 1982? I do think the world offers more solace now. More ways of accepting what body you have. More ways of finding peace with it.”

It's that peace and solace that Reid hopes readers get from Pretend We Are Lovely — especially any readers struggling with their own body image or suffering from an eating disorder.

“I hope this book brings them that peace,” says Reid. “I wasted so much time, money, and heartbreak trying to fit what the world said I needed to be in order to find love. I had to do it, to get through that bleakness, but I wonder what else I could have accomplished had I simply always allowed my body to be whatever it was, without shame. I think most readers will be able to recognize themselves as either Enid or Vivvy, and some as Francie, and as the characters’ relationships to food and their bodies evolve, I hope readers might take courage and succor against the damage done to us and the damage we do to ourselves."