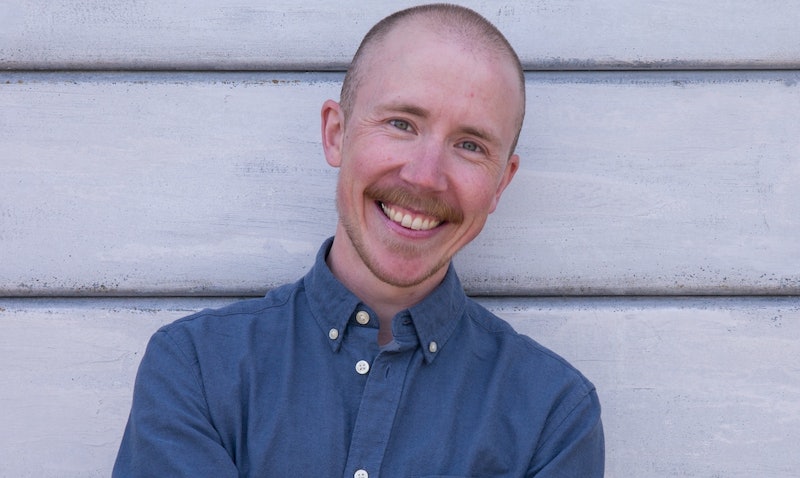 When you’re talking about something as personal as family it’s hard not to relate things back to your own experience. At the age of 30, journalist Freddy McConnell fulfilled his dream of carrying his son after his doctor told him he wouldn’t be able to have a child. As a transgender gay man it caught the attention of the media and he documented his journey in the film Seahorse. What started as a personal mission for McConnell and his partner challenged stereotypical understandings of parenthood and family paving the way for his BBC podcast Pride & Joy. “I wanted to carry on sharing stories but I can’t share mine multiple times so I wanted to open the conversation up and speak to other people going through this queer family creation process which is so difficult to go through sometimes,” says McConnell.

Available on BBC Sounds, Pride & Joy has the tagline “For queers, having kids is complicated. Yet lots of us make it happen. These are our stories.” McConnell highlights that for straight or cis couples family planning and creativity can be a little bit more straightforward. You may think you’ve heard stories of surrogacy or family planning but not like this.

He spoke to 61 year old Cecile Eldridge, one of the oldest surrogates in the world, about carrying her grandchild for her son and his husband. Similarly, interviewees Harriet and Meegan, a queer couple who have been trying for a baby for a long time, highlight that, when it comes to family planning, there are no certainties. Each story featured on the podcast is intensely personal and leaves you feeling like you’ve had a small insight into the family lives of other people.

“Helping people tell their stories is a huge responsibility”

“Helping people tell their stories is a huge responsibility,” says McConnell. “With queer storytelling in the mainstream media it’s so often the case that the first thing to fall by the wayside is the subjects emotions and priorities. I’ve had the experience where I've had to be quite vulnerable to share and it’s ended up being an exploitative experience.”

Queer families come up against unique problems and discrimination from the moment they decide to start a family all the way through to their child attending school and beyond, so representation is crucial. People need to see other families like their own not only surviving but thriving. “Pride & Joy has put me in a position where I no longer feel like I was doing this alone,” says McConnell, “I hope people can use it as a resource and source of information as well as providing a community.”

In episode one McConnell spoke to his “queer super hero” Jacob. They share the experience of getting pregnant and having kids. “Having two trans people talk about their pregnancies is rare,” says McConnell, “It’s never happened before and for it to be going out on a podcast on the BBC feels quite radical. We weren’t even being interviewed, it was just a chat totally unfiltered.”

Listening to McConnell and Jacob talk gives you a massive sense that so much progress has been made for queer families. However, McConnell knows he has to continue advocating for trans parents recognition. At the end of April 2020 he lost his case at the Court of Appeal to be listed on his child's birth certificate as the father or parent, not mother. McConnell has made clear that they intend to take the case further if they can.

“I realise that it’s not just about me. This is about all trans parents and the fact that no trans man can be registered as a father.,” he says, “If I was straight and married to a cis woman who’d had our baby but we used a sperm donar there’d be no question that I was the father. If the husband was trans he wouldn’t be registered as the father. There’s massive implications.”

No two families are the same. Pride & Joy highlights how wonderful the road to parenthood can be for queer families, but also how uniquely hard it can be too. “We’re all fighting a battle to make the world less gendered and more accessible, anyone can be broody, and your queerness isn’t threatened by your desire to have children,” says McConnell.

You can listen to Pride & Joy on BBC Sounds now.

More like this
Gen Z Are Twice As Likely To Identify As Queer, According To New Data
By Sam Ramsden
What The UK Blocking Scotland’s Gender Recognition Bill Means
By Sam Ramsden
Adam Lambert Called Out The George Michael Biopic Over Potential Casting
By Sam Ramsden
Adam Ali Hopes 'Waterloo Road' Will “Subvert” Queer Misconceptions
By Sam Ramsden
Get The Very Best Of Bustle/UK
Sign up for Bustle UK's twice-weekly newsletter, featuring the latest must-watch TV, moving personal stories, and expert advice on the hottest viral buys.