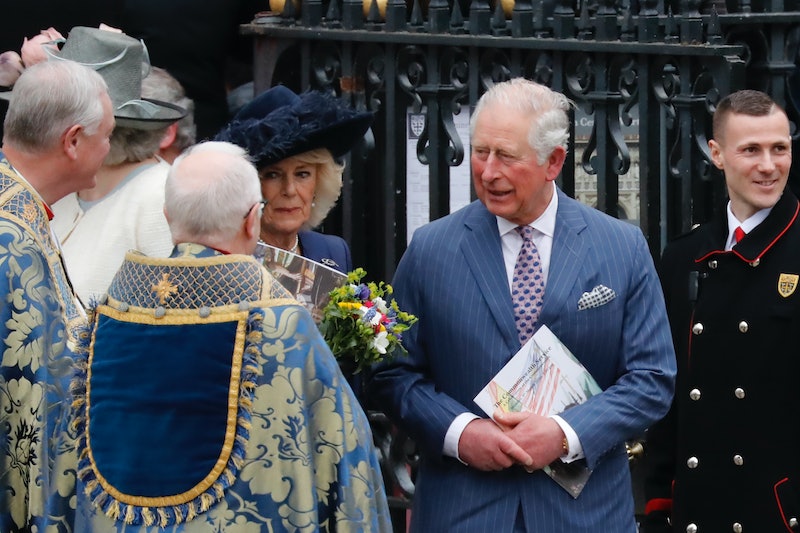 Over the last couple of weeks the government and the NHS have released numerous guidelines in order to prevent coronavirus spreading. And it looks like even the royal family are taking notice. Prince Charles appeared to be namaste-ing, rather than shaking hands, at the Commonwealth Service today (March 9) to say hello to his guests. While you might have been encouraged to bump elbows with your colleagues, the Duke of Cornwall has come up with his own greeting to show respect while maintaining a healthy distance from others during the coronavirus outbreak.

The Duke and Duchess of Cornwall both attended the Commonwealth Service today alongside the Duke and Duchess of Cambridge and Prince Harry and Meghan Markle at Westminster Abbey. In a video showing the Duke of Cornwall's entrance, he appears to be bowing to his guests with his hands in prayer position (much like you would at the end of a yoga class) as opposed to shaking their hands. The move, which avoids all physical contact with the other person, is a sign of respect while falling in line with health recommendations surrounding coronavirus. A very wise move from Prince Charles.

The Duke of Cornwall wasn’t the only one who seemed to be avoiding shaking hands at the event. In fact, all the royals could be seen greeting their guests and exchanging pleasantries without actually touching anyone. The Queen very astutely wore a pair of gloves for the event and bowed her head while greeting people on her way in. According to royal correspondent Rebecca English, the move was all in-keeping with Westminster Abbey's current Coronavirus policy, rather than royal protocol.

Alongside the royals and key politicians from the UK, heads of government and representatives of the 54 countries that make up the Commonwealth were at Westminster Abbey today for the service. Celebrities such as Craig David, Alexandra Burke, and Anthony Joshua, were also in attendance this year. The world-famous British boxer gave a reflection during the service.

More like this
Eurovision Has Been Given A Whole New Look Ahead Of Its Liverpool Debut
By Bustle UK
Stephen Graham & Steve McQueen Are Working On A Wartime Drama
By Darshita Goyal
Armani Jackson Is Following In His Famous Actor Sister’s Footsteps
By Catharina Cheung
Vanessa Bauer Is Reportedly Dating Her 'Dancing On Ice' Partner
By Darshita Goyal
Get The Very Best Of Bustle/UK
Sign up for Bustle UK's twice-weekly newsletter, featuring the latest must-watch TV, moving personal stories, and expert advice on the hottest viral buys.