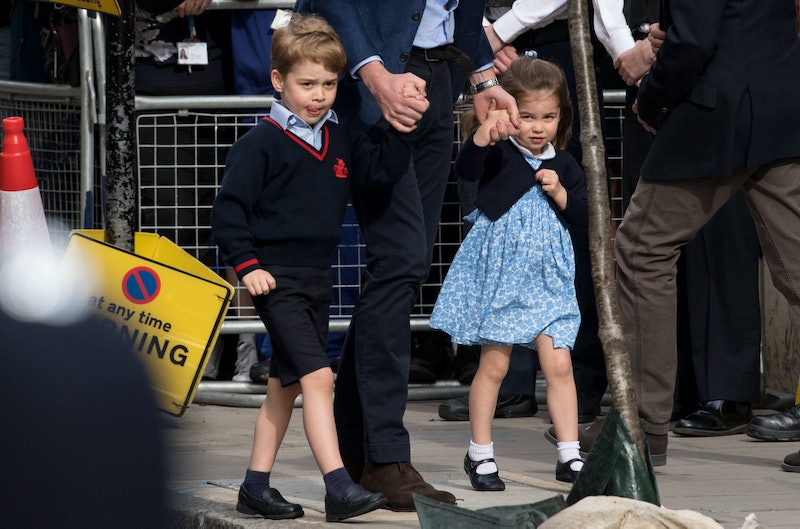 It's no surprise that Prince George's family doesn't call him "Prince George". While — barring any big changes to the monarchy — he will someday be the King of the United Kingdom, he's just a kid, and kids have nicknames. That said, George's is pretty surprising. According to a report from The Sun, Prince George's nickname is "Archie."

The five-year-old reportedly revealed his nickname himself while out playing with his grandmother Carole Middleton and his sister, Princess Charlotte, near the Middleton home in Berkshire. A woman who was walking her dog told The Sun that she passed the family and wasn't planning on talking to them, but George started petting her dog.

"I was asked by a police minder not to take a photo of the children, which I didn’t," she told The Sun, "but George started stroking my dog. Just to be friendly I engaged in a bit of small talk and I asked George what his name was, even though obviously I knew it."

At this point, she was surprised to hear him not say, "George", but something entirely unrelated: "To my astonishment he said, 'I’m called Archie' with a big smile on his face. I don’t know why he calls himself Archie but kids often play with their names and I think it’s lovely."

First of all, congrats to this woman for being able to have this as her go-to story for the rest of her life. Second of all, this is adorable. Third of all, did she not then ask Princess Charlotte her name after that? Come on!

There isn't a clear reason Prince George would be called Archie, because his middle names are Alexander and Louis. But, the last name that George uses at school is Cambridge and, thanks to a note on George's Wikipedia page, I know that there was another George Cambridge who was the Archdeacon of Middlesex in the 1800s. Archdeacon? Archie? Is this nickname Wikipedia-inspired? Cambridge family, please confirm!

It could be that George just likes the name or someone in the family thought it was cute. (It is.) And this is not George's only nickname. The Mirror reported in 2013, the year he was born, that friends of the Duke and Duchess of Cambridge started calling Prince George "PG" for short. Then, the parents took the next step and called him "PG Tips" or just "Tips", after the tea brand. Ah, nicknames. They run such a delightful and unpredictable course. The Sun reports that George is also called "PG" at school, which is cute, but it's also pretty wild to have a letter in the name your friends call you stand for "Prince".

George is not the only member of the royal family with multiple silly nicknames. Town & Country has a list of royal nicknames, including "Squeak" for Kate Middleton, "Cabbage" for Queen Elizabeth, and "Steve" for Prince William. Royals: They're just like us, making weird evolving nicknames based on random things.

More like this
Lilibet Had The Most Adorable Reaction To Prince Harry’s Dancing
By Sam Ramsden
Constance Wu On Self-Doubt, Family Drama, & Her Sister's Unwavering Support
By Constance Wu
Why Harry Styles & Olivia Wilde Make A Great Couple, According To Astrology
By Nina Kahn
Bennifer, Kravis, & 14 Other Fun Celeb Couples Halloween Costume Ideas
By Emma Carey and Brittany Leitner
Get Even More From Bustle — Sign Up For The Newsletter