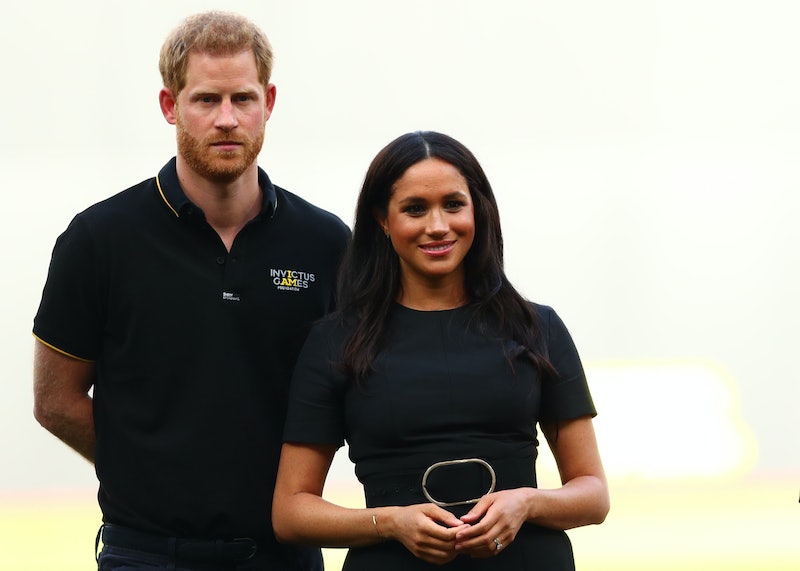 The Duke and Duchess of Susssex are setting the record straight. As it turns out, Prince Harry and Meghan Markle didn't give rules to their neighbors, a rumor which began in response to the couple's supposed desire to keep family life private, as per E! News. This clarification came following an article published by The Sun on Friday, which claimed neighbors living near Markle and Prince Harry's home at Frogmore Cottage, including the couple's staff, were reportedly told during a residential meeting not to approach or greet the couple, pet their dogs, ask to babysit Archie, or put anything through the property's mailbox.

On Sunday, Buckingham Palaces strongly denied the report, according to Hello Magazine. A palace spokesperson told the publication:

"The Duke and Duchess didn't request this, didn't know about it, and had nothing to do with the content or guidance offered."

In recent months, the couple has stirred up controversy by keeping life at Frogmore Cottage more secluded to create a sense of normalcy for baby Archie. For instance, in April, Markle and Prince Harry announced the birth of their first child would be private, opting out of the traditional photoshoot on the steps of the Lindo Wing, as reported by People.

The couple's decision to exclude the press drew criticism, and U.K. tabloids viewed the move as upending royal tradition, per the New York Times. However, the Duke and Duchess of Sussex have shared plenty of moments with fans on their own terms, and since Archie is not in line for the throne, the decision to keep family life further from the public eye is understandable. As parents, it's ultimately their own decision.

Markle and Prince Harry's desire for privacy has continued during their baby's first few months. In early July, Prince Harry and Markle didn't reveal Archie's godparents, who were named at the baby's christening on July 6, according to People. A statement from Buckingham Palace read, "The godparents, in keeping with their wishes, will remain private." Archie was christened at a private chapel at Windsor Castle, and only about 25 close family members and friends were in attendance, though the small ceremony keeps with royal tradition.

However, the Duke and Duchess of Sussex haven't disappeared from the public sphere entirely, nor denied fans photos of their life and work. Back in April, Markle and Prince Harry started a @SussexRoyal Instagram account, which provides regular updates on royal life. The announcement read:

“Welcome to our official Instagram; we look forward to sharing the work that drives us, the causes we support, important announcements, and the opportunity to shine a light on key issues. We thank you for your support, and welcome you to @sussexroyal”- Harry & Meghan

On this Instagram account, Prince Harry and Markle shared pictures from Archie's christening, and the two have also made several high-profile public appearances in recent weeks. On July 14, Markle and Prince Harry attended the Lion King premiere in London, sharing plenty of photos from the event. The Duke and Duchess of Sussex also attended the King Power Royal Charity Polo Day on July 10, and brought baby Archie along for the occasion .

It may not be custom for the royals to shy away from the public, but it's clear the Duke and Duchess of Sussex are creating their own path. The couple reportedly wants to keep family life separate for Baby Archie's sake, and even though they didn't issue rules to their neighbors, more privacy doesn't seem it would've been too big of an ask.