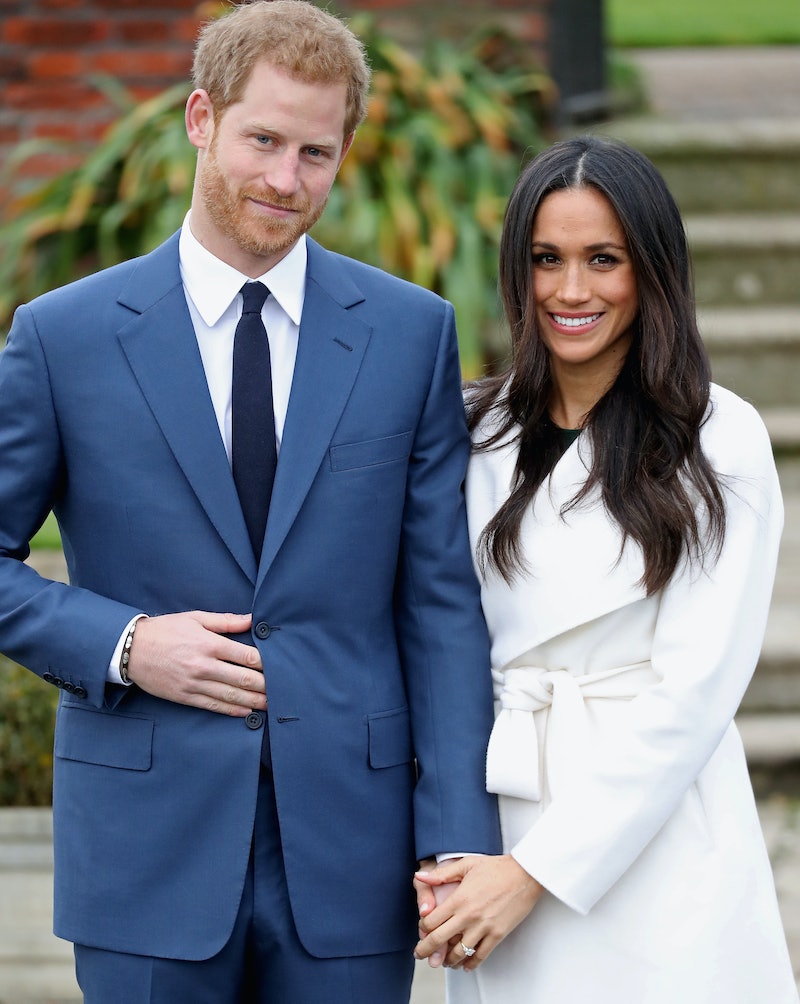 With Prince Harry and Meghan Markle's wedding on Saturday, it's tough waiting to find out all the scoop. Even so, there are some aspects of the big day that have already been revealed and others that can be assumed based on tradition. For example, Prince Harry and Meghan Markle's wedding vows will most likely be the same as Prince William and Kate Middleton's were in 2011.

Prince William and Prince Harry's mother, Princess Diana,forged a new path with her 1981 wedding vows to Prince Charles. Diana omitted the part in the traditional vows about promising to "obey" her husband. Instead, she promised to "love him, comfort him, honor and keep him, in sickness and in health," according to a 1981 article from the New York Times.

Thirty years after Princess Diana and Prince Charles got married, Prince William and Kate Middleton also omitted the word "obey" from their own wedding vows. According to a 2011 report from The Daily Mirror, an inside source explained Middleton's decision to follow Diana's lead and revise the vows. “They have been together for 10 years, studied together, lived together and have the same friends," the source said. "They are equals in every way, and have planned this wedding as equal partners, so for Kate to ‘obey’ doesn’t make sense.”

There has not been an official announcement about Markle doing the same thing when she marries Prince Harry, but it is likely to happen. Aside from honoring Prince Harry's mother and following in Middleton's footsteps, omitting the word "obey" is in line with Prince Harry and Markle's stances on gender equality.

The former actor has always been very vocal about being a feminist. At the 2015 U.N. Women's Conference Markle gave a speech on gender equality. She declared, "Women make up more than half of the world's population and potential. So it is neither just nor practical for their voices, for our voices, to go unheard at the highest levels of decision making."

During Markle's first official visit to Wales with Prince Harry, she pointed to her fiancée and said, "He's a feminist too," according to a fan who spoke to the Telegraph. The Suits star isn't the only one declaring the prince's feminism; he has been very vocal about women's rights, as well.

In 2016, Prince Harry gave a speech during the Nepal Girl's Summit in Kathmandu. According to an article from The Huffington Post, Harry said, "We won't unlock these opportunities for young women and girls unless we can change the mindset of every family and community. To achieve this, it cannot just be women who speak up for girls."

At this point, it is safe to assume what Harry and Markle won't say in their wedding vows, but what about the words that they will say. According to the Church of England's Common Worship Book, the word "obey" can be excluded from the vows, if the couple so chooses.

According to the original version of the vows, the bride says, "I, [name], take thee, [name], to my wedded husband, to have and to hold from this day forward, for better for worse, for richer for poorer, in sickness and in health, to love, cherish, and to obey, till death us do part, according to God’s holy ordinance; and thereto I give thee my troth."

The alternative version changes the last part to: "for richer for poorer, in sickness and in health, to love and to cherish, till death us do part, according to God’s holy ordinance; and thereto I give thee my troth."

That is almost exactly what William and Middleton said at their wedding in 2011 with just one minor difference. According to a transcript from The Huffington Post, Middleton said, "I, Catherine Elizabeth, take thee, William Arthur Philip Louis, to my wedded husband, to have and to hold from this day forward, for better, for worse; for richer, for poorer; in sickness and in health; to love and to cherish, till death us do part, according to God’s holy law; and thereto I give thee my troth."

The Royal Family is all about tradition when it comes to weddings. Prince William and Kate Middleton took on Princess Diana and Prince Charles' interpretation of the wedding vows, so it would make sense for Prince Harry and Meghan Markle to do the same. It not only follows a relatively new family tradition to omit the word "obey" with the modern wedding vows, but it also is in line with both of their feminist beliefs.

More like this
Tyler Perry Makes Rare Comment About Meghan Markle & Prince Harry's Love Life
By Radhika Menon
Who Is Nick Cannon Dating & How Many Kids Does He Have?
By Jordyn Tilchen and Radhika Menon
Hailey Bieber Just Responded To *That* Viral Met Gala Moment
By Radhika Menon and Sam Ramsden
Dixie D’Amelio & Noah Beck “Love Each Other” Despite Breakup Rumors
By Julia Emmanuele, Jordyn Tilchen and Grace Wehniainen
Get Even More From Bustle — Sign Up For The Newsletter