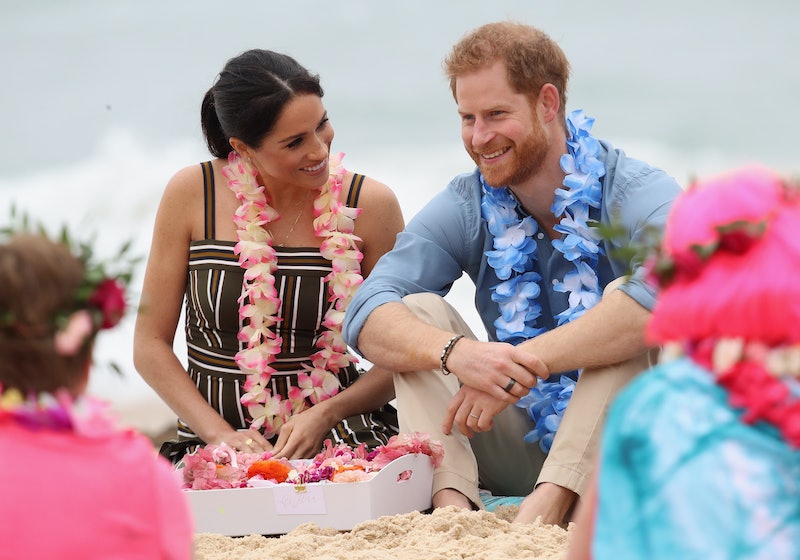 As an Australian who lives in the UK, I can testify to the fact that jet lag after traveling between the two can be hell. And clearly Prince Harry was feeling the effects, too. This week, as part of his tour of Australia and New Zealand with Meghan Markle, Prince Harry wore a sleep tracker, the Oura ring, which claims to pick up on bodily signals to help with sleep rhythm and patterns of restfulness — not a bad bet to get ahead of some pretty serious jet lag. Harry is clearly up on his trends; the Oura is part of a broader industry of "wearable tech" that aims to revolutionize how we sleep, exercise and think about our bodies.

The Oura worn by Harry, which was first identified by People magazine, retails for $299, and aims to measure a wide range of markers from its wearers. Its design registers body temperature variations, activity variations throughout the day, and pulse levels, and feeds them all to an app that "reads" the data for information about exercise and sleep patterns. It's also tuned into Amazon's Alexa, so it can be controlled by the user's voice, and can work for seven days per one full charge.

According to Vox, the ring is seeing a lot of attention, and not just from the royal family. It's big in the "biohacker" community, aka people who are attempting to optimize their health to unprecedented levels.

There's not much sign that Prince Harry is trying to live forever, though. The Oura is part of a growing industry of wearable sleep trackers, and like many of them, it tries to improve sleep by giving you more information about how your body actually rests. As you enter different stages of sleep, your body temperature changes; it cools as you begin to feel drowsy, which is why sleeping in hot rooms, or exercising just before bed, is bad for sleep quality. During REM sleep, the deepest portion of sleep where you dream, your body temperature drops still further. Tracking temperature can therefore really be a good way to see how your sleep has panned out the night before.

The entire industry of wearable tech encompasses exercise trackers, sensors that vibrate when you receive an email or text message, and necklaces that can record voice messages. Wearables track your vital signs for all sorts of reasons; some track fertility, as the body's temperature varies across your menstrual cycle, while others, like Fever Scout, monitor kids for high temperatures. And it's only forecasted to get more popular. As wearables become more mainstream, the industry is on track for some pretty high growth; a market report in 2017 predicted that it would be worth over $51 billion by 2020.

The Oura might be Harry's secret weapon to try and beat jet lag, but I have some bad news for him. Science currently estimates that the more time zones that are crossed during travel, the more severe jet lag will be — and flying directly from the UK to Australia crosses a whopping 11. He and Meghan are only in the region for 16 days, and by the time they're about to leave they'll probably only just have adjusted.