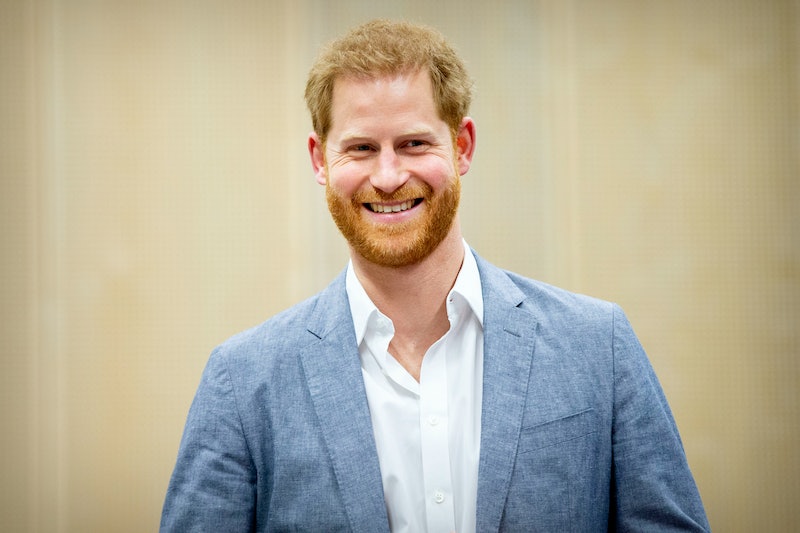 Prince Harry just became a dad, where his son Archie Harrison was born just this Sunday, on May 6. But Prince Harry's paternity leave is nonexistent, and the royal is off to the Netherlands for official monarchy business. While there Prince Harry wore a "daddy jacket" on the trip, keeping his newborn close to his heart. Quite literally.

The Duke of Sussex flew off to Netherlands on May 9 to begin the one-year countdown to the 2020 Invictus Games. The Invictus Games are a special project for Prince Harry, since the games are an international sporting even created for military members wounded in action. Prince Harry served in the Army for 10 years, and embarked on two Afghanistan tours. In 2017, Prince Harry also succeeded his grandfather, Prince Philip, as the Captain General of the Royal Marines. Prince Harry was the one who founded the Paralympic-style sporting event in 2014.

The prince was meant to go to Netherlands earlier this week for the event promotion, but since Meghan Markle went into labor, he shortened the trip into just one quick day. While away from his family, Prince Harry wanted to flaunt his newly-achieved dad status with the help of a jacket.

Prince Harry went for a promotional bike ride with a black windbreaker on, but the jacket had a message stitched over his heart. On the left hand side of the jacket there was a patch over his chest that read "Invictus Family: Daddy."

The phrase had certain letters highlighted yellow, which upon closer inspection actually read, "I Am Daddy." Enter crying emoji here.

The sporty dad jacket wasn't the only baby-related moment to take place during Prince Harry's one-day trip away from home. While in the Netherlands, Prince Harry was welcomed by Princess Margriet to the country through a press event. During the event, the Dutch royal greeted Prince Harry with a small gift for his newborn. Princess Margriet passed him a tiny onesie with the "The Invictus Games" logo. Prince Harry then held up the tiny outfit to his chest like he was wearing it and grinned hugely. The royal has already clearly started working on his dad jokes.

The Princess wasn't the only one handing the Duke of Sussex baby gifts while on his trip. While meeting with the Invictus Games athletes, Prince Harry was handed a gift from a little kid named Daimy Gommers. Her dad. Paul Gommer, was competing to earn a spot in the 2020 competition. He lost his leg in a parachuting accident, and when Daimy heard that her father would get to meet Prince Harry, Daimy wanted to come to the event prepared. The young daughter brought the prince a soft rattle for his newborn, which Prince Harry immediately brought up to his ear and shook as a test-run. It passed his test.

From wearing zip-up jackets with daddy labels to playing with baby rattles and making dad jokes, Prince Harry clearly is excited to be a new father.