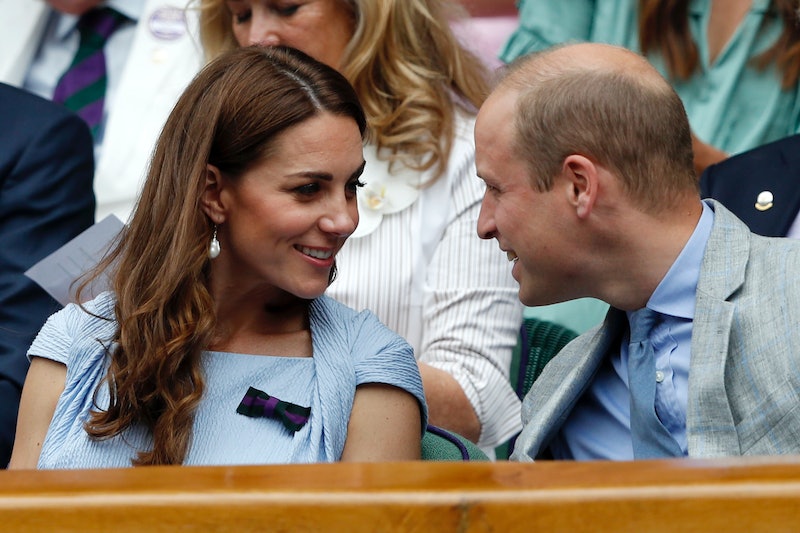 Obviously, Wimbledon is all about tennis, but it’s also prime time to see members of the royal family stun the nation with their breathtaking fashion choices. During the final on Sunday (July 14), Prince William and Kate Middleton were twinning at Wimbledon, and I can’t help but wonder whether there’s some hidden meaning here somewhere. I mean yeah, they could just be complementing each other’s lewks, but there’s gotta be a reason for the pale blue colour palette.

If you’re not familiar with the term ‘twinning’, here’s a quick rundown. Basically, it’s when you and your significant other wear similar outfits or match each other through a specific colour palette. In this case, Kate wore a “powder blue” Emilia Wickstead dress according to Hello magazine, which William matched with “complementary blue trousers with a shirt, tie, grey blazer and brown suede shoes.”

“We tend to want to fit in with the person we are dating. Yes we are all unique but we want to, as a couple, look united as if we ‘fit’,” relationship expert Dr Nikki Goldstein told The Huffington Post Australia (via the Express). “You conform to the environment that you’re in, so it’s only natural that when you’re dating someone, even automatically without knowing — you will start to change your style so that you can blend in with them.”

“It’s the colour of the sky, or ‘true blue’,” business communications and etiquette consultant Lynda Goldman told Aol Finance. “It’s both friendly and powerful. It connotes loyalty.” And according to Very Well Mind, the colour blue “calls to mind feelings of calmness or serenity” and is “often described as peaceful, tranquil, secure, and orderly.” While there’s no dress code for spectators at Wimbledon, maybe William and Kate wanted to emit some calm vibes to Novak Djokovic and Roger Federer during their match.

This isn’t the only time royals have been spotted wearing pale blue at a sporting event, as the majority of the family matched the Queen’s outfit with different shades of blue during Ascot in June. As the Express writes, this is rather strange as the “royal females aren’t normally meant to match the monarch.” While there’s no official reason for the amount of blue worn at Ascot, the Express suggests that “it could have also been a touching show of solidarity by female royal family members to their monarch.”

Blue is also reportedly the Queen’s favourite colour, according to a study conducted by Vogue via the Daily Mail, which found that “[w]hether the shade be teal, cobalt or powder, 29 per cent of the coats, dresses, suits and hats worn by the Queen have been predominantly that colour.”

The royal family’s history with the colour blue can be reached as far back as the Elizabethan era according to S.Pellegrino’s culture site Itineraries of Taste, which writes that only royals were allowed to wear the colour blue in that period.

So while a lot can be said about the Duke and Duchess's close relationship through their matching outfits, it seems that the colour choice says more than originally meets the eye.