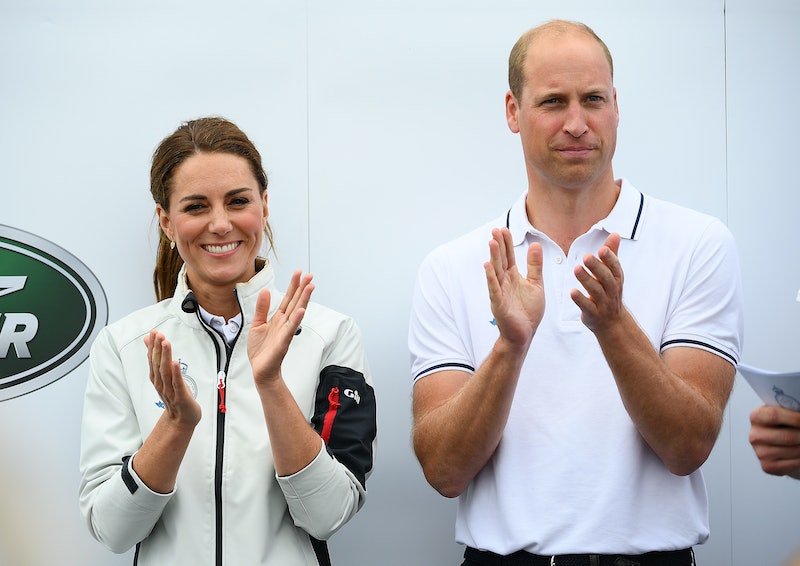 They've had a few months to choose a new moniker for their charitable arm, so what did they finally decide on, you wonder? Will and Kate's Place, perhaps? Cheers to Charity, maybe? Royals Doing Really Good Things? Nope, none of the above. Prince William and Kate Middleton's royal charity officially has a new name, as People recently reported, and it's pretty straightforward. Not that that's surprising, of course — the royal family isn't exactly known for getting wild when it comes to this type of thing.

Anyway, according to the outlet's insider, the split wasn't caused by anything dramatic or whatever — it was just a "natural progression." Since the Duke and Duchess of Sussex are no longer involved with it, though, it's definitely deserving of a new name.

So, without further ado, let's get to the big reveal, shall we? William and Kate's new charity name is *drumroll* ... The Royal Foundation of the Duke and Duchess of Cambridge, according to documents published by Companies House, as reported by People.

If you were expecting something a tad more adventurous, well, sorry to disappoint. It's pretty par for the course, though. And it *is* about charity, after all. There's really no need for it to express anything other than what its core purpose is.

The name of Harry and Meghan's recently created charity is pretty straight-forward as well, by the way. Back in July, People confirmed that they'd decided to go with Sussex Royal The Foundation of the Duke and Duchess of Sussex. A little on the repetitive side, perhaps, but it does mirror their Instagram handle, @SussexRoyal. So, they've definitely got some strong brand continuity going for them.

According to a royal insider, the choice for the couples to split up their charitable arm shouldn't have come as much of a surprise. "A review of The Royal Foundation is something that had previously been announced," the source told People in May. "This is part of [the couples’] diverging paths, which hastened a look at the foundation." Fair enough.

Hey, as long as they're all doing good work for the people and causes that need them the most, it shouldn't make a difference whether or not the four of them do it together. It's pretty safe to assume that they've all got different interests and passions, so it makes sense that they'd want to pursue things separately and in their own ways.

As for the new name of William and Kate's charity, it definitely does the job. No need to distract with something flashy. They can save those kinds of informalities for joking around with their family at home.

More like this
Prince Harry Incorrectly Recites Christina Aguilera’s “Genie In A Bottle” Lyrics
By Jake Viswanath
I Read Prince Harry's 'Spare' So You Don’t Have To: 11 Highlights To Know
By Marina Watts
Meghan & Harry Respond To Jeremy Clarkson’s "Apology" Over *That* Column
By Sophie McEvoy
'Breaking Bad' Duo Walt & Jesse Are Back — In This Super Bowl Commercial
By Jake Viswanath
Get Even More From Bustle — Sign Up For The Newsletter
From hair trends to relationship advice, our daily newsletter has everything you need to sound like a person who’s on TikTok, even if you aren’t.