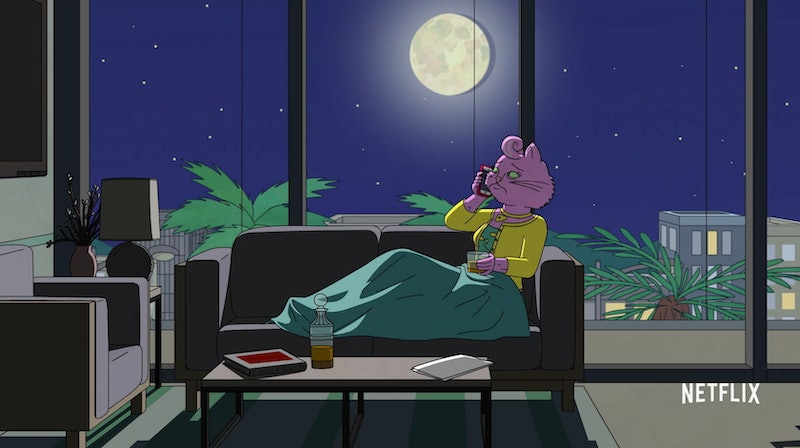 Netflix's BoJack Horseman isn't your typical animated series. Throughout its run, the comedy series has dealt with very adult issues, such as depression, drug abuse, and sexuality. (Spoilers are ahead for BoJack Horseman Season 4, which is now streaming on Netflix) In Season 4, Episode 9, Princess Carolyn has a miscarriage on BoJack Horseman and admits to having at least five previous pregnancy losses. It's a heartbreaking moment — and it's especially groundbreaking for women characters in animated TV shows.

The animated genre rarely tackles the topic and, if it is approached, miscarriage is usually implied rather than clearly stated out loud. And that's why it's a bit shocking when Princess Carolyn hears it from her very matter-of-fact doctor. She has trouble telling Ralph and saying it aloud, but she finally confesses what happened at the end of the episode. The admission leads to the couple having a frank discussion about what it means for their plans to start a family. Ralph is willing to consider other options, such as adoption, but Princess Carolyn wants to keep trying, and she breaks up with him.

It's great to see BoJack Horseman take on the sensitive subject with its trademark humor and heartfelt writing. Miscarriage has been portrayed many times in Japanese animation, but several American animated TV shows and movies have implied the situation and left it up to the viewer's imagination. For example, miscarriage and infertility is portrayed visually in Pixar's Up during the 2009 film's opening montage of Carl and Ellie's love story, but never stated aloud.

In 1994, Nickelodeon's Rugrats aired an episode called "Angelica's Worst Nightmare," in which Angelica's mother Charlotte reveals she is pregnant. Charlotte's pregnancy seems to be far along enough along that she is telling her family and co-workers, while her husband Drew is trying to budget for the new addition. At the end, Charlotte tells Angelica, "I went to the doctor this morning and it turns out I'm not having a baby after all." The line heavily implies that Charlotte may have had a miscarriage, but the word is not said on the children's program. A 2010 now-banned episode of Family Guy included a what the New York Times described as "a lengthy Warner Brothers parody in which Peter stalks Lois with an Acme Miscarriage Kit."

Like many other traditional animated "cartoon" programs, BoJack Horesman has its slapstick and silly moments of hilarity. But Princess Carolyn's infertility storyline shows that animation is more than capable of exploring the a serious women's subject in an honest and heartbreakingly real way.