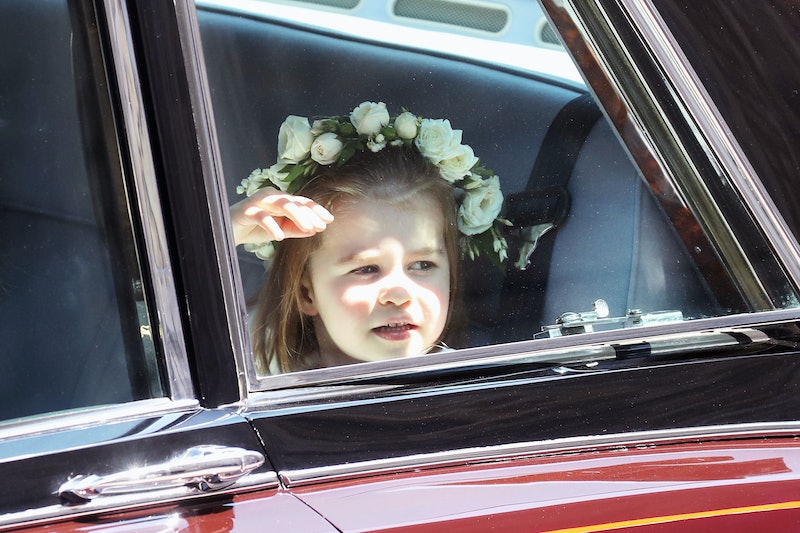 The royal wedding might have been Meghan Markle's time to shine, but just as many eyes were on her bridesmaids. Princess Charlotte wore all white to the royal wedding and looked so stinking cute. This will be the second wedding that she's been a part of in her short life, but, if the outfit is any indication, she's already got the position down pat.

At the age of three years old, she's already a little style star and her royal wedding bridesmaid outfit proves it. The little princess walked down the aisle in an all-white dress that matched her Aunt Meghan's in color, but was a whole lot different otherwise. The dress featured a ribbon at the waist with cute little shoes to match.

Of course, an outfit is nothing without its' accessories. While the all white look was absolutely adorable and the monochrome will forever go down in history, the details were stunning. Add to that a little flower crown that all of the toddlers were wearing and you have the cutest little bridesmaid outfit that you've likely ever seen.

This outfit is a lot different than the sweaters and colorful dress hat Princess Charlotte typically wears. After all, this is not your average day at grade-school. As of right now, there is no word who made the bridesmaid dress, but that doesn't take away from how stinking adorable the outfit was.

Princess Charlotte knows a thing or two about how to dress for a wedding. She might only be three-years-old, but this is already her second one that she's starred in as a bridesmaid. The toddler was the maid of honor in Aunt Pippa Middleton's wedding, since Kate Middleton was not allowed to be.

"Kate would upstage her sister," royal expert Judy Wade previously explained to People of Pippa's wedding. "It's a tricky situation for Pippa. She would want her sister by her side, as who else would she trust to make things go well? But if your sister is a future queen, she is going to upstage the bride and draw attention."

Markle didn't want a maid of honor for her own reasons. According to previous Bustle coverage, Markle has too many close friends to choose just one. Instead she had her closet friends come to help her get read for her big day. Although, let's be honest, Princess Charlotte does upstage Markle a little bit with her adorable outfit.

The little group consists of all of Meghan and Prince Harry's godchildren and nieces and nephews. The entire group looked absolutely adorable in their matching outfits all dragging their parents into the church. It's not every day that you get this many children all dressed up and behaving so well.

The girls wore dainty little that were perfect for the big day. The dresses were outfitted with all white shoes and flower crowns in their hair. The boys stuck to more formal attire, with plain black suits.

Consider this the inspiration that you need for your future big day, because it really doesn't get much cuter than this. Something tells me that every non-royal wedding out there is about to get a little inspiration for the future group of bridesmaids.