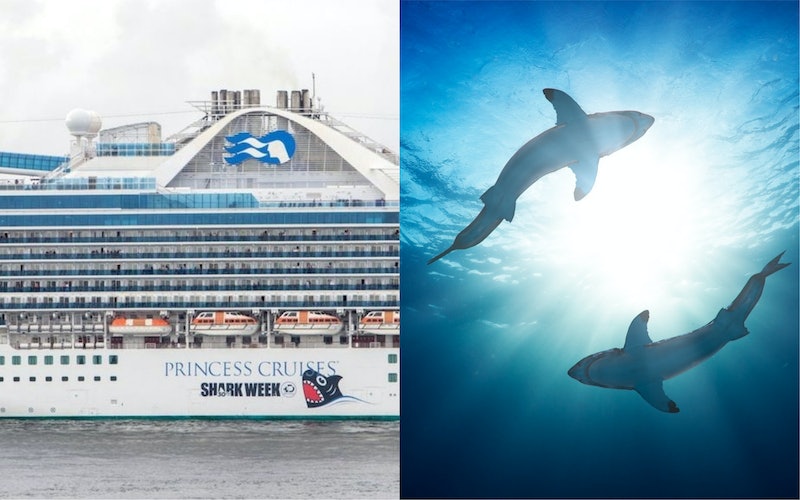 The biggest occasion of the summer has almost arrived. No, not the Fourth of July — SHARK WEEK. The 30th presentation of Discovery Channel's weeklong devotion to all things big, fishy, and slightly scary begins later this month. As three decades of programming is no little feat, some extra shark-y celebration is warranted, no? The folks at Princess Cruises think so. The line has partnered with the Discovery Channel to create the vacation you never knew you wanted, but you undoubtedly deserve: a Shark Week-themed cruise.

Throughout the summer and into September, certain ships sailing through the Caribbean, Alaska, and the UK will feature unique excursions dedicated to celebrating Shark Week. Delish reports Shark Week-themed Caribbean cruises will last seven days, as will select Shark Week-themed Alaskan cruises. Prices begin at $549 per person for the former, and $600 for the latter. There are also two Shark Week cruises planned for UK, each spanning two weeks. A room on the Baltic Heritage cruise starts at $2,759 per person, but at the time of publishing, it departs in less than a week on July 7.

How does one make a nautical vacation Shark Week-themed? If you think about it, a cruise is about as close as you can get to a shark without actually seeking the carnivorous fish out. But, Princess takes the whole experience to an entirely new level.

The Discovery at Sea and Animal Planet excursions available on select Princess Cruise vacations are truly something to behold. Per the website, these excursions allow passengers to "explore coral reefs teeming with life on a snorkeling adventure in the Caribbean, let centuries-old ceremonies at Edinburgh Castle in Europe transport you through time; or experience life aboard Alaska’s Deadliest Catch crab boats." If you have ever spent an afternoon marathon-ing nature shows, now you can immerse yourself in the settings you admire so deeply.

For the specifically Shark Week-themed ships, Delish reports no detail will go overlooked. Decorations will match the occasion, with everything from casinos tables, dining rooms, and even elevators being decorated with nautical touches. The Princess website details further offerings, including limitless Shark Week programming (including an exclusive look at "Great White Abyss" before it airs on television), animal education stations, and shark teeth necklace-making workshops for little ones. Glitter tattoos and shark face-painting stations for shark lovers of all ages are also available, naturally.

Of course, the cruise ship's kitchens are getting in on the celebration, too. You won't want to disembark before trying a Shark Attack Margarita or a tropical Great Blue Shark — but two of the plethora of Shark Week-themed menu additions to be offered by Princess.

Other Discovery at Sea Offerings include guided astronomical tours with world-renowned astrophysicist Dr. Hakeem Oluseyi. He will help you master the art of stargazing, by teaching you how to spot and identify the major constellations, in addition to teaching you secrets and stories about the sky. You can learn the biological details about your ports of call — such as their native plants and animals — with on-board naturalists who have devoted careers to studying them.

But, you're truly interested in one thing and one thing only: SHARKS. The most adventurous way to commemorate the 30th anniversary on a Princess Cruise may not even involve the themed ships at all. Excursions offered by two Princess ships — one in Honolulu and one in La Paz, Mexico — offer up-close encounters with REAL, LIVING SHARKS. In Hawaii, you can cage dive with great white sharks (like in the movies), and in Mexico, you can actually swim with whale sharks. Nothing beats the real thing.

You can book a room on a Shark Week-themed Princess Cruise on the company's website.