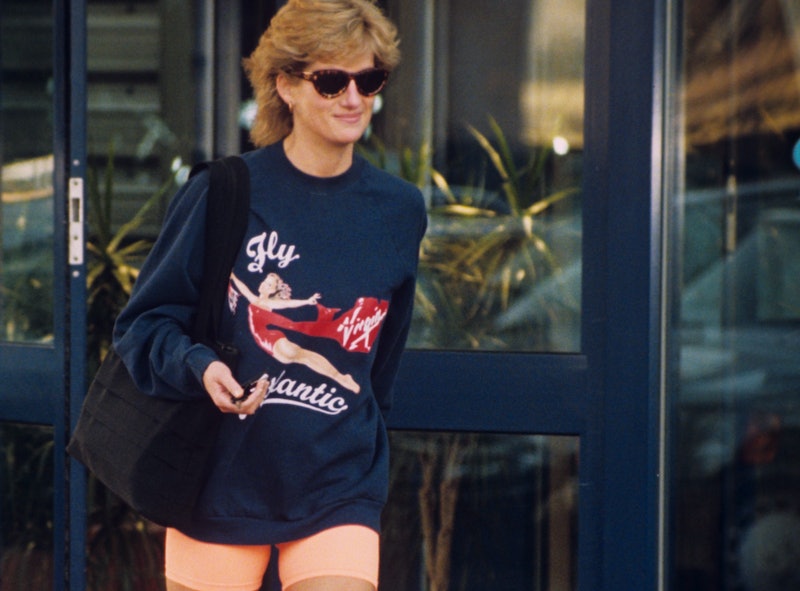 Princess Diana was a legend when it came to style, whether that meant donning revenge dresses or dressing up for royal banquets. Her style was so closely followed that even her workout clothes made waves in the fashion community, and now one of Princess Diana's workout outfits are back in the public eye. Princess Diana's Virgin Atlantic sweatshirt is going on sale at RR Auction, bringing back the royal's iconic athleisure look.

The princess's go-to workout wear is already up for online auction at the Boston-based auction house, and will conclude on July 10 with the proceeds going to charity. The crewneck was originally gifted to her by business magnate Richard Branson, who was the founder of the Virgin Atlantic airline. It is now being sold by Princess Diana's longtime personal trainer, Jenni Rivett, who received the sweatshirt as a gift before the princess's untimely death.

The sweatshirt itself is a simple dark blue cotton/polyester blend sweater. The front of the crewneck has an image of the Virgin Atlantic ‘Flying Lady’ logo with white cursive text reading “Fly Atlantic.” Included in the auction is also a note written by Princess Diana to her trainer of seven years, reading, “Dearest Jenni, Lots of love from, Diana, x.”

“This sweatshirt was given to HRH by Sir Richard Branson. It became her most worn top on her regular visits to the gym. She felt there were far more important issues to focus on in the world then her gym attire and therefore decided that wearing the famous Virgin sweatshirt to every session, would be a good way to stop the media frenzy!" Rivett wrote in one of the letters. "A few months before her untimely death she called me to say she had left a few sweatshirts for me. Amongst them, this one — which I have now decided to part with.”

Princess Diana has been (somewhat jokingly) credited with starting the recent athleisure trend, with photos of her wearing the Virgin sweatshirt highlighted in articles. Even Virgin Abloh credited the princess as the inspiration behind Off-White’s Spring 2018 runway show at Paris Fashion Week, sharing a mood board full of Princess Diana outfits as the inspiration behind the collection. The end result was a line full of bike shorts, peplum tops, and scrunched socks.

But the reason Princess Diana wore the crewneck so frequently wasn't because she loved the retro sweatshirt. It was to deter the paparazzi from making news out of her workout outfits.

"Every single gym session the press were camped outside the gym to take a snapshot of her walking out. She felt irritated that they were encroaching on her private time and was genuinely upset that they constantly felt the need to take a photo of her coming out of the gym," Rivett shares with Bustle. "So she decided that if she wore the same sweatshirt after every session, the press would not be able to publish the same sweatshirt day in and day out! Part of her attraction was her dress sense so they would get bored of seeing the same top."

The reason that Rivett ended up with the sweatshirt could have been because Princess Diana was Marie Kondo-ing. "She was so kind and generous, and I think she was having a clear-out and she knew I liked that sweatshirt. So I received a phone call from the Palace to pick it up amongst a few other items, and the lovely card," Rivett says.

The proceeds from the auction will go to help a Malawian family in South Africa, which Rivett believes Princess Diana "would be happy about."

Even when Princess Diana dressed to distract attention away from herself, she made waves. By July 10, someone is going to take a little piece of fashion history home with them.