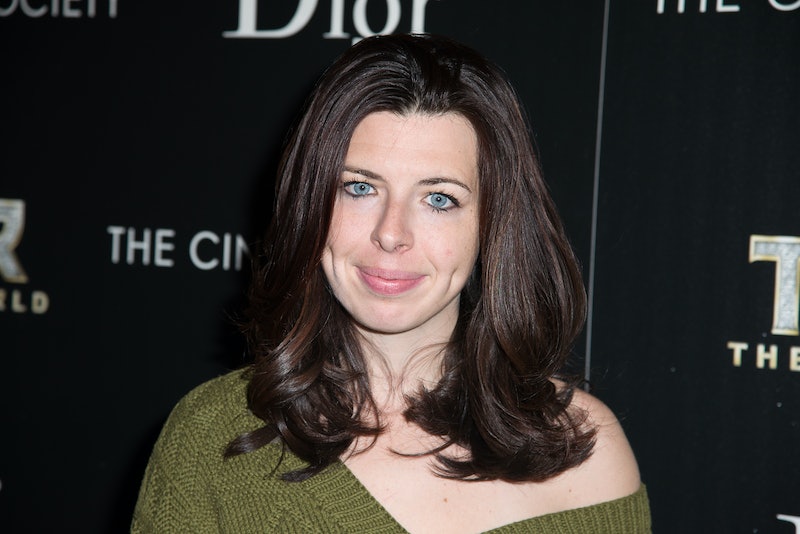 Get ready to feel all the feels: Heather Matarazzo is engaged, and she just announced the news in the sweetest way. On Monday, The Princess Diaries star revealed via Twitter that she'd proposed to girlfriend Heather Turman— and Turman said yes! Matarazzo actually popped the question back on January 11, but the couple decided to keep the news to themselves for a few days before letting the rest of the world in on their sweet secret.

Both Matarazzo and Turman dedicated social media posts to their engagement news, and pretty much every detail will make you go "aww!" Let's start with the photos: beachside, on the brink of sunset, candid, and cute —like, really cute. Whoever took the series of shots did a great job capturing three super sweet moments over the course of the proposal.

In the first photo, Turman is resting her head on Matarazzo's shoulder as they share a seat on a piece of perfectly-sized driftwood. At this point, it's easy to imagine that Matarazzo was saying some really romantic stuff to Turman before popping the big question, which had clearly happened by the second photo. In that shot, Turman covers her face with her hands, as if to exclaim, "Ohmygod! I can't believe it!" In the last picture, Turman — after obviously saying "yes" — wraps her arm around Matarazzo and plants a cute little kiss on her cheek. Really cute, right?

On Twitter, Matarazzo captioned the photos with a sweet quote from When Harry Met Sally, the cult-classic rom-com starring Meg Ryan and Billy Crystal: "When you realize you want to spend the rest of your life with somebody, you want the rest of your life to start as soon as possible." If you're not already crying tears of joy, you might want to go ahead and grab some tissues.

Matarazzo shared the engagement pictures on Instagram as well, this time accompanied by an equally-romantic quote from the book The Alchemist by Paulo Coelho: “There is only that moment, and the incredible certainty that everything under the sun has been written by one hand only. It is the hand that evokes love, and creates a twin soul for every person in the world. Without such love, ones dreams would have no meaning.” (Definitely stealing both of these quotes for my eventual engagement picture captions, by the way.)

According to E! News, the two lovebirds first met back in 2016, when Matarazzo was starring in the film Stuck. Turman, a comedian, was working as a writer and producer for the flick, and thus, an on-set Hollywood meet-cute was made. In an Instagram post from August, Turman shared some details about how she and Matarazzo fell in love while working alongside each other.

"Full circle with this woman," she captioned a screenshot of an old on-set picture. "We wrote, produced and co-directed a series of 8 episodes of content, 24-pages in 3 days with 2 crew members a sound guy, and no additional hands. It was an insane amount of work, yet working with her couldn't be easier. We share the exact same vision, and have such a mutual respect for one another. I trust her eye and ear completely, and I know she trusts mine too. I love watching what she brings to the table creatively. She's like the Joel to my Ethan Cohen—only we share a first name and not a last, because we aren't related, and thank the f--kin Universe for that!! @heathermatarazzo you are my soulmate."

I'm not crying! You're crying! These two seem like they're a match made in Hollywood heaven, and everything about their engagement is giving me some serious warm-fuzzy feelings. Congratulations to the happy couple!

More like this
Anne Hathaway Shared A "Thrilling" 'Princess Diaries 3' Update
By Darshita Goyal
Britney Spears Shared The Real Reason She Shut Down Her Instagram Account
By Brad Witter
Twitter Is In Awe Of Taylor Swift’s “Lavender Haze” Music Video
By Jake Viswanath
Jennifer Coolidge Hunted For Jewels & Lashes In J.Lo’s Hotel Room
By Jake Viswanath
Get Even More From Bustle — Sign Up For The Newsletter
From hair trends to relationship advice, our daily newsletter has everything you need to sound like a person who’s on TikTok, even if you aren’t.