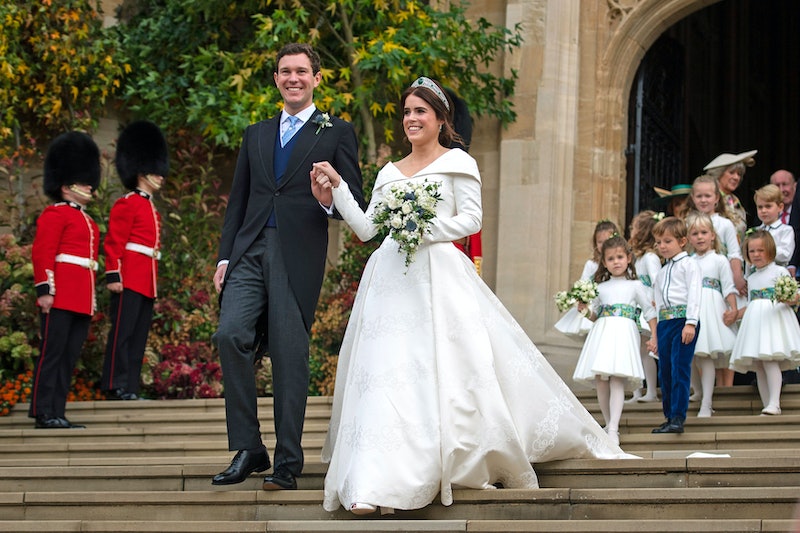 Royal or not, any time there's plans of a wedding to be had, the dress is always the leading topic of discussion. Despite the florals, guest list and endless flavors of cake, the details in a wedding dress make the event even more special. As for the details in Princess Eugenie's wedding dress, they were embroidered with plenty of sentiment to make her wedding day just that.

Dressed as her title commands, she wore a long-fitted 50's inspired bridal gown with a full skirt, and an off-the shoulder neckline. In the back, the princess carried a mid-sized train along with a V-neckline to match the front of the dress.

The most peculiar thing about this royal wedding dress, though, is Princess Eugenie's ode to her most special sites. The designers, though, made her dress one to gawk at. According to Cosmopolitan, Buckingham Palace revealed they embroidered symbols representative of places the princess holds most dear.

"The symbols are a Thistle for Scotland acknowledging the couple's fondness for Balmoral; a Shamrock for Ireland as a reflection of the Bride's maternal family; the York Rose; and ivy representing the couple's home."

Are you getting that tingly feeling too? Because, same.

The designer had actually made the fabric for these motifs in their London studio and once completed, it was woven in Italy. Even her dress has its own fairytale.

Princess Eugenie also made a special request about the non-traditional back of the dress. The wrap around V-neck dress dips lower in the back of the dress, and showed off a scar from when the princess had surgery at age 12 for scoliosis.

In not-so-princess fashion, Princess Eugenie opted out of wearing a veil on her wedding day, and instead rocked the Grenville Tiara, originally worn by the Queen's mother.

Unlike most brides-to-be, Eugenie was very decisive in what look she was going for almost as soon as the wedding was announced. Earlier this year in an interview she said she knew she'd be going with a London-based designer from the start.

"As soon as we announced the wedding, I knew the designer, and the look, straight away," she told British Vogue. I never thought I'd be the one who knew exactly what I like, but I've been pretty on top of it." Why that's a talent you could only dream of for your wedding.

A beautiful gown always warrants a pair of stunning slippers to complete the look. The princess strutted down the castle aisle in a pair of pearly whites from London designer, Charlotte Olympia.

In total, the attendees amounted to 800 guests at Windsor Castle in which even some celebrities were spotted with an invite. Naomi Campbell, James Blunt, Ellie Goulding, Demi Moore, Kate Moss and Cara Delevingne (and her naughty suit) came out for the day's big celebration.

Weddings and the dresses that come with it are always going to have a fashion moment if royal princesses have anything to do with it.