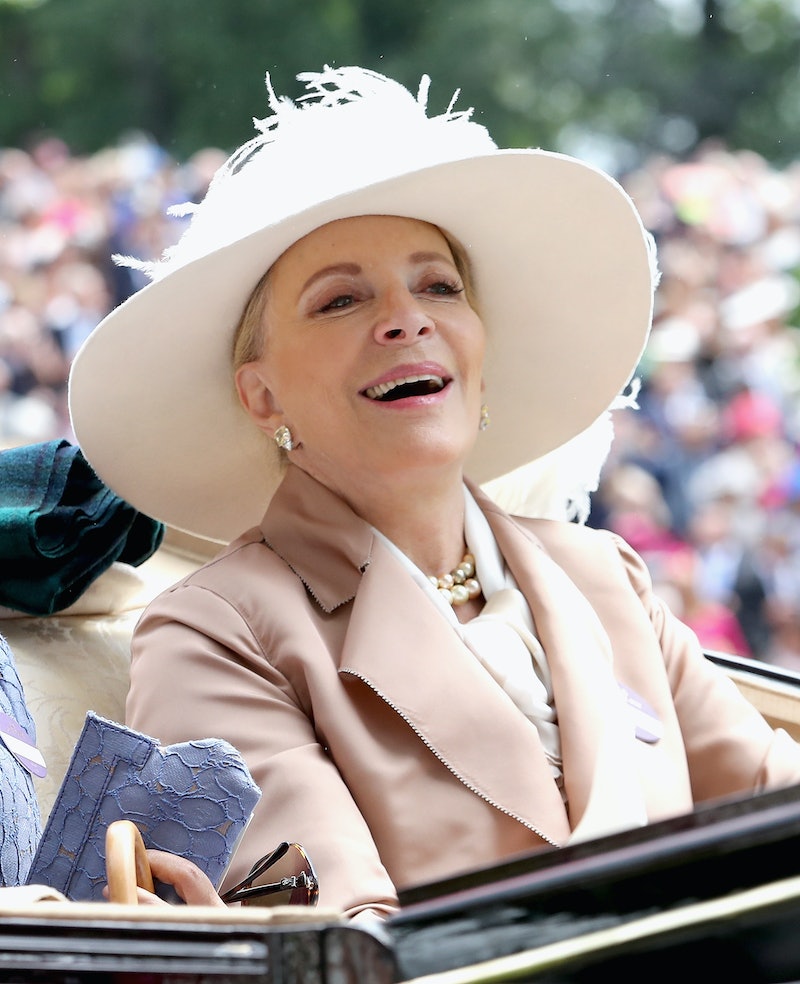 There's always that one member of the family that shows up at an event and has to spoil it for everyone — even in the royal family. According to Newsweek, Princess Michael of Kent, aka Queen Elizabeth's cousin, reportedly wore a racist brooch to meet Meghan Markle for the first time. To no surprise, the internet was quick to call her out. The brooch might have historical ties, but it's definitely not fit for the occasion.

All eyes are always on the royals. Typically, their fashion choices lead to sold-out items and new trends, but not this time. Princess Michael was seen arriving to a Christmas lunch at Buckingham Palace wearing a blackamoor brooch. The pin featured a black man in a gold, gem-filled turban. Because nothing says Christmas like an accessory like that.

The brooch was seen loud and clear on the shoulder of her white jacket. It's the timing of pulling the accessory out of her jewelry box that's getting people's attention. This event was the first time that Princess Michael would be meeting Meghan Markle, whose mother is African-American.

According to the Telegraph UK, blackamoor brooches "were once the height of glamour and considered a tribute to the 'exotic' Africans who inspired them." Nowadays the pieces are seen as racist.

If all of that isn't enough to prove that it's a fashion faux pas, tack on the fact that Princess Michael has a history of saying racist things. She's been quoted suggesting that black guests “go back to the colonies,” according to Newsweek, on top of a handful of other comments.

The Queen's cousin did issue a statement on the matter though. According to TMZ, a spokesperson says that Princess Michael is "very sorry and distressed" by the matter. The comment doesn't mention if she actually took the brooch off or not. Basically, she doesn't realize how racist the pin is, which could be even worse than if she did.

Whether you're a celebrity, everyday Joe, or a member of the royal family, Twitter does not hold back. If you wear it, people will see and they will comment on it. And, boy, did they have a lot to say about Princess Michael's brooch.

While just about everyone agrees that the statement piece was wrong to wear, not everyone is surprised to see that she did so. Some people are even hoping that she gets banned form future events. Because fashion is powerful, but not always for the right reasons.

Not exactly the words you want to hear about yourself from a royal commentator.

Fashion lets you wear your opinions right on your sleeve — even racist ones. Whether she meant to offend anyone or not, some people think that sartorial slip is enough to get banned.

Just because it's a historical pin does not mean that it should be worn around with pride. Especially when meeting the first bi-racial member of the royal family.

One more time for the people in the back — RACIST. JEWELRY.

It will be interesting to see how the family deals with events like this in the future.

Honestly though, did no one mention this was a bad time to wear the pin before she left the house?

This seems to sum it up well.

Whether she meant to offend Markle or not, this event is important. Fashion has a way of speaking for you. It's good to know what it will say before you decide to put it on.