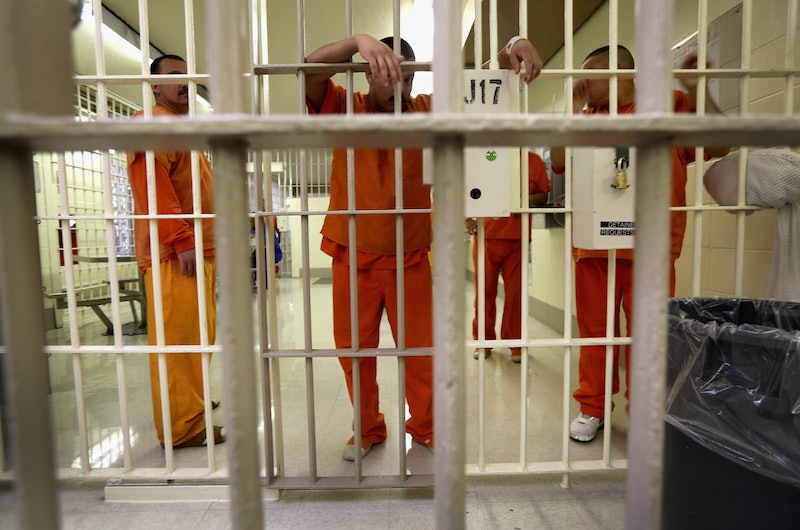 Aug. 21 marks the first day of planned nationwide prison strikes in over a dozen states. The strikes, which are slated to last over two weeks, are focused on protesting labor exploitation of prisoners, as well as poor living conditions. They are also calling on everyday Americans to pay attention to their consumer decisions, as your purchasing choices could perhaps be affecting prisoners' plight.

As The New Republic reported in 2014, in many states, prisoners often work for very minimal compensation (around a dollar a day), despite having a variety of expenses they must address while in prison. Many companies in the United States benefit from prison-produced products and services. This is why the upcoming strike is, among other things, asking people outside of prison to more carefully consider their consumer choices — and avoid companies that benefit from prison labor.

Amani Sawari, a spokesperson for the protests, which are being supported by the Incarcerated Workers Organizing Committee (IWOC) and Jailhouse Lawyers Speak, echoed these sentiments to Vox, saying:

Prisoners want to be valued as contributors to our society ... Every single field and industry is affected on some level by prisons, from our license plates to the fast food that we eat to the stores that we shop at. So we really need to recognize how we are supporting the prison industrial complex through the dollars that we spend.

Sawari also emphasized that, for those who may question why prisoners should make more income while being incarcerated for a crime, it is important to recognize all of the costs with which prisoners are faced. As she told Vox,

Prisoners do like having the opportunity to earn, because they do have to support themselves financially in a lot of ways ... Prisoners have to provide for their health care, their dental care. They have to buy food if they want to eat outside the three times a day most prisons serve. … They have to buy clothes like jackets and boots, hygiene products, cosmetics, books, study materials, paper, tape, scissors. Any little thing they need, they have to buy that ...

In addition to protesting labor exploitation, prisoners will also be striking against poor living conditions in prisons around the country, against sentencing disparities, and in support of rehabilitation programs. The IWOC's website lists ten national demands for reform that address many of these issues.

As Vox noted, the strike is set to take place in at least 17 states, but it is not yet clear how many inmates will participate. The outlet noted that, among other tactics, prisoners will engage in hunger and work strikes throughout the protest period.

The IWOC's website lists the April 2018 riot at the Lee Correctional Institution in South Carolina as part of the impetus for this year's strike to demand more humane conditions for prisoners. The riot left seven inmates dead and many more injured. As the New York Times reported at the time, prison guards allegedly waited for over four hours to step in and stop the fight. Bryan Stirling, the director of the South Carolina Department of Corrections, told the paper that the delay was due to a need to assemble more guards in order to ensure safety.

Overall, it is clear that there are a variety of incarceration injustices that prisoners around the country believe need to be addressed. If you would like to play a part in supporting their cause, you can consider looking into some of the companies that use prison labor and re-evaluate your purchasing decisions. You can also check out the IWOC's website to find further ways you can help support the strike.