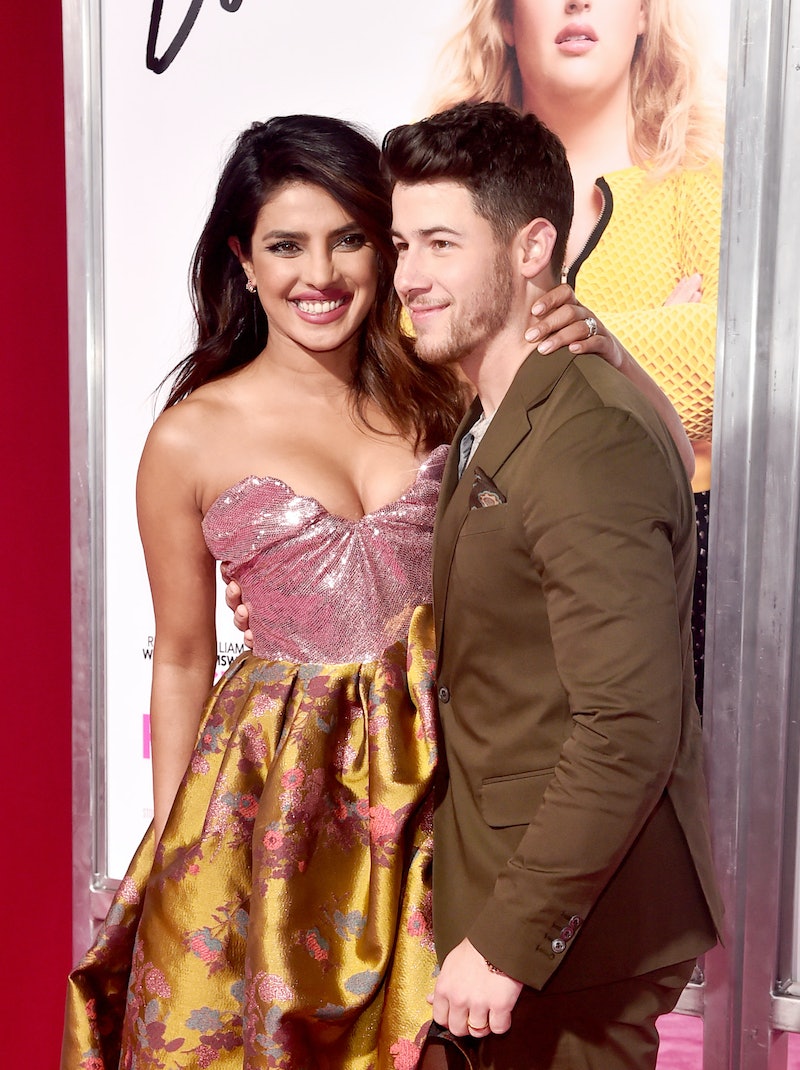 First comes love, then comes marriage, then comes a mini Jonas in a baby carriage? During a recent film premiere, Hollywood's most adorable newlyweds addressed the possibility of adding to their family. As People reported, Priyanka Chopra discussed having kids with Nick Jonas, but according to the actor, it may be some time until you see couple actually pushing around a stroller.

Chopra and Jonas attended their first movie premiere event as a married couple on Feb. 11 to promote her latest film, Isn't It Romantic. Even though the movie is all about its own, wacky rom-com story, the focus was all on the Quantico star's IRL romance with her husband. During the premiere of her film, Chopra addressed the subject of children and revealed that while the couple isn't planning to have kids anytime soon, that they'll definitely be ready when the time comes.

“We both know that that’s something that needs to happen, but it’s not something I think about very much,” she told reporters at the event. Chopra continued to reveal that children may be on the back burner at the moment because they're both focused on their very successful, careers, which makes total sense, “We’re both very driven, we love our work, we’re married to our work, and we’re both very supportive of each other’s work. So I’m sure it will happen in an organic way.”

Jonas himself previously opened up about having children with Chopra. During an interview with Spotify's The Rewind with Guy Raz, which aired on Dec. 13, the singer revealed that he would love to have kids sometime in the future, as Entertainment Tonight noted. "I definitely want to be a father someday," he said, "I think that's a real dream, and I think I have had to grow up pretty quick. With that, you could look at it two ways. You could say that was unfair, or you could say it has given me some real perspective at an early age."

He went on to share that he would love to be able to pass on that perspective, gained from his extensive career in the entertainment industry, to his children, "And I have seen a lot of life at an early age and I hope to be able to share that with a kid of my own someday."

Two months prior to the couple's wedding, which took place on Dec. 1 in Jodhpur, Rajasthan, a source echoed the pair's recent comments and revealed to Us Weekly that babies were on the brain for Chopra and Jonas. “[They] keep talking about starting a family together. They have amazing chemistry and can’t wait to have kids," the insider claimed, and continued to say that having children is "definitely on the agenda" for the couple.

While children may be on the "agenda" for Chopra and Jonas, it doesn't seem as though they have plans to have kids anytime in the near future, based on both of their recent comments. But, whenever the time does come, it sounds like the couple is more than ready to take on all of the responsibilities associated with welcoming some little ones of their own.