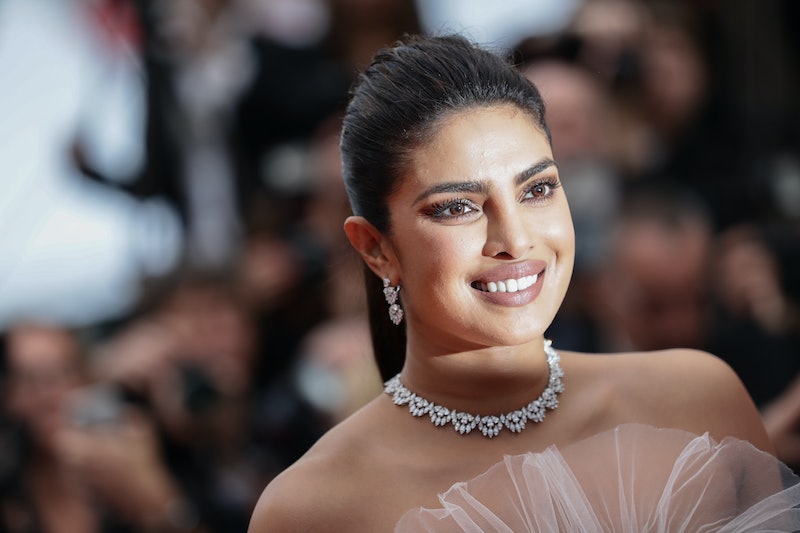 Fashion has finally begun to break away from being a predominantly white industry and putting more people of color on covers, and while we still have a long way to go, progress is definitely being made. Case in point: Priyanka Chopra Jonas’ latest InStyle cover where the actor is dressed in a saree that covers next to nothing.

The actor is the cover star of InStyle’s July issue, where Chopra Jonas graced the pages donning a champagne-colored saree designed by Tarun Tahiliani. However, instead of covering her body, the saree she wore showed off Chopra Jonas’ glowing bronzed back. The star took to Instagram to post the cover photo, explaining that saris and fashion in India don’t always demand coverage of one’s body.

“Fashion is such an important part of global culture, often arising from centuries of tradition, and doesn’t go out of style when the seasons change,” Chopra Jonas wrote in the caption. “The ‘Saree’ is one of the most iconic and recognized silhouettes from India. To me, its beauty lies in its versatility, not just in drape and fabric. It embodies elegance, femininity, and power, and I love how I feel when I’m wearing one.”

In her cover shoot, titled "Indian Summer," Chopra wanted to expose Indian designs that were uncommon in American media. In the starlet’s cover interview, Chopra Jonas explained that the "shiny, sequined, over-the-top Christmas-tree outfits" aren't what she believes to be the true representation of sarees in Indian Fashion — especially not the one's that she wears.

Growing up, Chopra Jonas and her mom, who is a doctor, would wear saree every day that were much different than that of the draped fabrics often seen in Bollywood films.

"She’d wear [Chopra Jonas' mother] these beautiful ones made of French chiffon, with a bindi," Chopra Jonas explained in InStyle. "And the nape of her neck would smell like Dior’s Poison. That, to me, was a modern woman. And that’s what I want to show the world. Indian designers make such incredible clothes that are inspired from beautiful embroidery and patterns."

When Chopra Jonas married her husband Nick Jonas in December of 2018, the actor and producer's Hindu wedding celebration was immersed in Indian culture — particularly her wedding dress.

According to Harper's Bazaar, Chopra wore a custom dress from Abu Sandeep Jani Khosla for her Mehendi. However, for Chopra Jonas' Hindu wedding ceremony, the actor sought out Sabyasachi, one of India's top designers. Decked out in head-to-toe extravagance, Chopra Jonas rocked a sparkling, bright red lehenga made of flowers, silk knots, and crystals, which more than 100 embroiderers spent well over 3,000 hours to make.

Sometimes people forget that fashion is a powerful thing and can influence people to think of a culture in one way. But Priyanka Chopra Jonas is breaking the wheel in how Indian fashion is being exposed and celebrated in America, building up a place for true South Asian representation in Hollywood. And she'll do it all in high heels and a red saree, no less.