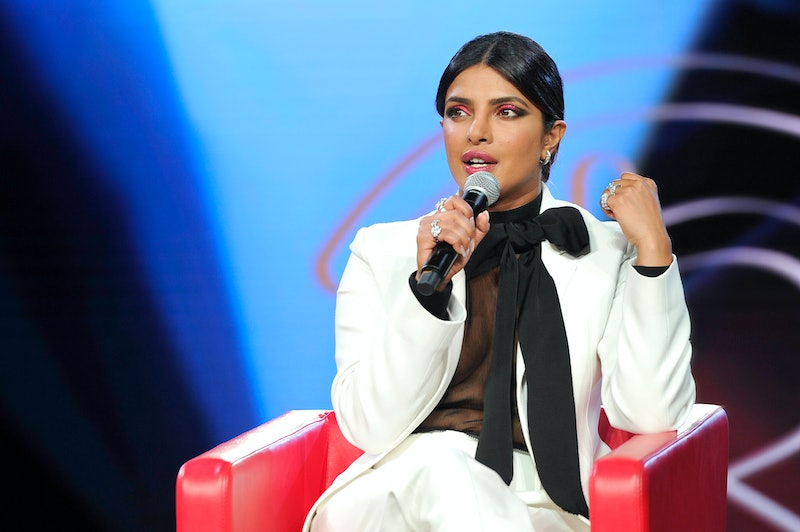 On Aug. 11, actor Priyanka Chopra was confronted over past statements she's made about the relationship between India and Pakistan. At a beauty event in Los Angeles, while Chopra was taking questions from the crowd, Chopra was asked about a Feb. 26 tweet where she wrote "Jai Hind #IndianArmedForces," during Indian-lauched airstrikes against Pakistan. According to Harmeet Kaur, writing for CNN, “‘Jai Hind’ is a slogan that translates to ‘Hail India,’ often used in political speeches by Indian leaders.”

Chopra's choice to tweet this statement was criticized by a bystander at the event. A woman named Ayesha Malik walked up to the microphone and said that the Bollywood star was "encouraging nuclear war against Pakistan" while serving as a UNICEF Goodwill Ambassador, a position that “share[s] a commitment to improving the lives of children worldwide,” according to UNICEF’s website. Bustle has reached out to Chopra for comment, and we will update this story when we receive a response.

In a video that Malik posted on Twitter, she can be heard saying, "So it was kind of hard hearing you talk about humanity, because as your neighbor, a Pakistani, I know you're a bit of a hypocrite… You tweeted on February 26, 'Jai Hind #IndianArmedForces.'"

To give context to Malik’s comments, it’s important to understand the events she’s referring to. On Feb. 19, in Pulwama, Kashmir, 40 Indian Central Reserve Police officers were killed in a suicide bomb attack. (Kashmir is a region that has been fighting for independence from India, Pakistan, and China since 1947.) The group that carried out the attack — Jaish-e-Mohammad — is based in Pakistan, where it's considered a terrorist group. The Indian government threatened nuclear war, sending airstrikes to Balakot, Pakistan. India is currently occupying Kashmir, allegedly cutting Kashmiris off from communication with the world, prompting fears of imminent human rights abuses.

Before the mic was taken from Malik, she added, "You are a UNICEF ambassador for peace and you're encouraging nuclear war against Pakistan. There's no winner in this." Malik continued, "As a Pakistani, millions of people like me have supported you in your business of Bollywood and you wanted nuclear war."

In response to Malik, Chopra said, "Whenever you're done venting ... got it, done? OK, cool," and went on to defend herself by saying that "war is not something I am really fond of but I am patriotic," in the video posted to Twitter.

Many pointed out that Chopra’s characterization of her former fan’s anger as “venting” was condescending and demeaning, as was Chopra’s pointing out that she has “many, many friends from Pakistan.”

"The way you came at me right now?" Chopra said. "Girl, don't yell. We're all here for love. Don't yell. Don't embarrass yourself. But we all walk that middle ground, but thank you for your enthusiasm and your question and your voice."

Malik herself took to Twitter to explain why Chopra’s answer felt hurtful.

This is far from the first time that other Desi women have called out Chopra for her comments on race, ethnicity, and nationality including participating in skin lightening ads and her “color-blind” views, which critics say perpetuate colorism. And her support of India's prime minister, Narendra Modi, has also drawn criticism. Chopra invited and thanked the head of state for attending her December 2018 wedding to singer Nick Jonas, despite Modi's support for Hindu Nationalism, which is thought to have led to anti-Muslim violence in India.

People who aren’t Desi — of Indian, Pakistani, or Bangladeshi ancestry — may feel like this isn’t their fight. But while Chopra is a respected South Asian actress, her comments and actions have been deeply hurtful to many other South Asian women — including Pakistani and Muslim women — who are harmed by the policies that Chopra is accused of supporting. Even as Chopra's fame is hailed as a win for representation, it's important to remember that celebrities can be held accountable for views that hurt the people they claim to be representing.