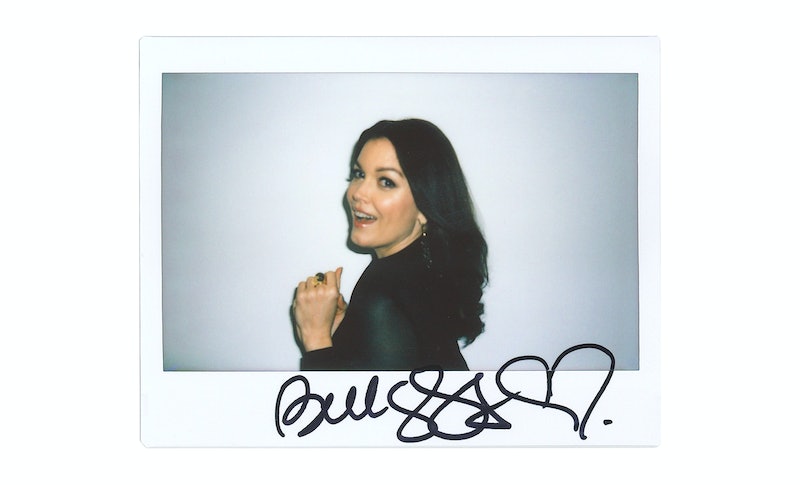 When celebrities hang out with Bustle editors, we want to give them the chance to leave their mark. Literally. So we hand them a pen, a piece of paper, a few questions, and ask them to get creative. This time, Prodigal Son star Bellamy Young is leaving her mark in the Bustle Booth.

"I got lucky twice," Bellamy Young says, reflecting on her latest TV role and the one she's most famous for. More than a year after Scandal and her First-Lady-turned-Madam-President character Mellie Grant took their final bow, the actor is back in the episodic business as Jessica Whitly on Fox's new fall drama Prodigal Son. "I'm a worker bee," the actor cheerfully explains. "I like having a time card to punch."

Bring up Mellie — one of Scandal creator Shonda Rhimes' signature formidable female characters — and the actor still sighs. "She was every woman. It was all in her," Young says. "But Jessica is also just so rich and troubled and broken and hiding."

The Prodigal Son matriarch has reason to hide. An Upper East Side socialite, Jessica gets more attention than she'd ever bargained for when her respected surgeon husband, Martin (Michael Sheen, who Young describes as "effortless"), is exposed as a serial killer. In the present day, her adult son Malcolm (Tom Payne), a criminal profiler, gets back in touch with his incarcerated and estranged dad for an expert's perspective on his cases. Just two episodes in, the series has put the most focus on Malcolm and the guilt he carries, but this family's wounds run deep, and there's much more excavation to come where Jessica is concerned.

"I just can’t wait for the maelstrom, the mayhem..." Young teases, remaining coy about what audiences will learn about her character as the season goes on. "I can’t wait for the centrifugal force that may pull her really apart and reveal everything — parts of her that she doesn’t even know are there."

How much did Jessica really know about her ex-husband's killings? Fans are likely already wondering whether she ever expected anything was amiss. But Young is inclined to give her character the benefit of the doubt.

"Particularly women, we have incredible intuition and often, especially if we’re living a 'proper' life, we’re taught to ignore it for the sake of propriety, for the sake of appearance, for the sake of not rocking the boat," she explains. "But I think she thought it was just another woman."

Jessica and Martin's marriage wasn't always so strained, however. Young has a whole backstory in her mind of their relationship, which she says thrived on "crazy chemistry." "I think that’s part of what broke her heart to lose him, on top of the shame and horror of who he really was," she adds. "She really loved him."

Prodigal Son is still slowly unraveling this family to expose its dark core (and it just got a full season order from Fox in which to do it), but you don't have to wait any longer to get the scoop on Young, in her own words and doodles: