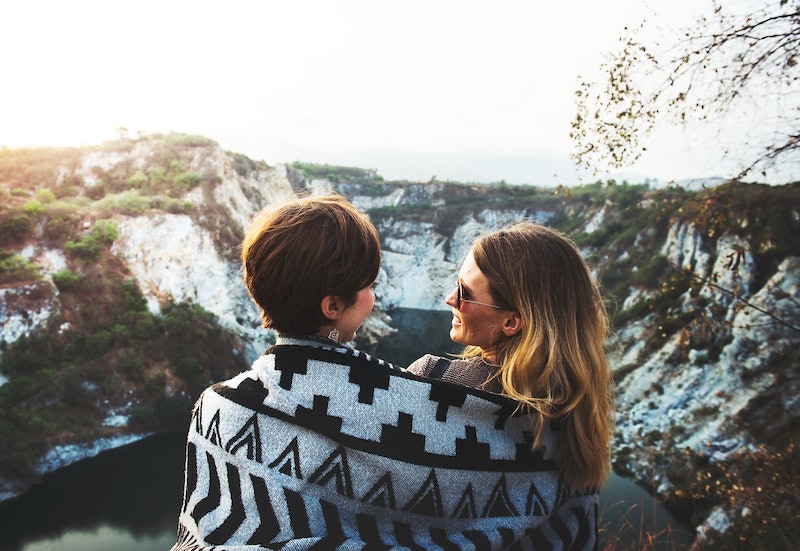 While there aren't a lot of things we can thank President Donal Trump for, it turns out that we can thank him for an increase in cuddling. Professional cuddling is a real job, and it's becoming even more popular since Trump took office. It's no secret that affection-starved people living in the U.S. suffer higher rates of depression and anxiety than those living in more touch-centric cultures, the cuddle business The Snuggle Buddies noted.

You're always on the go, always on your device, and you might go days without touching another human. Add that to the stress of the 24-hour news cycle spitting out story after story about the musical chairs of Trump's cabinet and ill-advised policy proposals, and you probably need a hug. I know I do. Perhaps the secret to feeling better is to simply reach out and touch someone.

"Platonic human touch releases oxytocin (chemical in our brains), which is why touch therapy and professional cuddling services have been so successful," The Snuggle Buddies, which has cuddlers around the country, noted. "Oxytocin has a major role in lowering blood pressure, lowering stress levels, reducing social anxiety, helping to relieve pain, and protecting against inflammation."

While it started as an alternative therapy, the professional cuddling business has gone mainstream, in part due to Trump being elected president, according to article in Rolling Stone by Allie Volpe. While it might sound a little touchy feely for your taste, here's why you might want to give cuddling a chance.

Consider Getting Your Cuddle On

Research published in the journal PLOS One found that people touch their phones an average of 85 times a day, but we're apparently touching each other far less.

"In a famed study, a researcher studied how many times friends touched each other while sitting at a cafe," Ranjan Patel, PsyD, MFT, noted on Psych Central. "He collected data around the world. In Mexico City, couples touched each other 185 times. In Paris, 115 times. In London, 0 times. In Gainesville, Fla., twice. We are not a touch-oriented culture. For all our obsession with sex, in contrast to other cultures, Americans are sadly physically starved."

Enter cuddling, which just might be the path to wellness for over stressed and under nourished Americans. While professional cuddling has been around for awhile, more people began actively seeking it out post 2016 election.

"The holiday season was the first time that since Trump won the election that a lot of people were seeing their family," Adam Lippin, co-founder and CEO of Cuddlist told Volpe for Rolling Stone. "People with different political views were going to be in the same place with relatives. That was the first hit of people having to confront it in a significant way. We saw an uptick around that."

On the Cuddlist website Lippin noted that touch deprivation was the impetus behind starting his cuddling business, which matches cuddling clients with cuddle practitioners (you can become a professional cuddler, too) across the country. All cuddling sessions are completely non-sexual, and are all about improving the human condition through touch. While this is a genius idea, it's also a little sad that we've become so disconnected from our bodies, and each other, that there is a drastic need for this service.

Why Cuddling Is The Best Medicine

"All life forms — humans, animals, plants — respond to being touched," Patel noted. "Giving physical affection to your dog is tantamount to injecting love. For many dogs, second only to food, touch is the greatest positive reinforcer you can give them. In fact, research shows that for many dogs, they respond more readily to petting than to food or toys. Plants have been shown to grow optimally when stroked. This is called the 'touch response' or thigmotropism, where we see structural changes in the roots."

Right now I am making a mental note to touch my plants later because I can't seem to keep one alive — can I hire a professional plant cuddler? Jean Franzblau noted on the blog for her business Cuddle Sanctuary that her foray into cuddling started by hosting sessions at friends' houses. Now, Cuddle Sanctuary hosts several cuddle activities each week in Los Angeles, and also offers a three-day cuddle-leader training course. The business thrived with the help of passionate volunteers who benefited from the cuddle sessions.

So, how much does it cost to get your cuddle on? Cuddle parties can start at low as $25 an event while a one-on-one cuddle can be upwards of $80 an hour. If you think there just might be something to this whole cuddling thing, but if you're a little cash poor, consider getting your friends together for a free cuddle session. Set ground rules, and hug it out because, touch is scientifically proven to make you feel better.

"There is something transcendent about cuddling, as it has the power to take energy from the outer world — human touch and intimacy — and influence our inner world, down to the molecular level," Dr. Daniel Yadegar, head of the Cuddlist Scientific Advisory Board said on the Cuddlist website. "Cuddling can improve immunity, enhance mood, and serve as an energetic elixir for all patients, especially those with chronic medical conditions. I recommend everyone get their daily dose."

There you have it. I guess it's time to get cuddly. Doctor's orders.