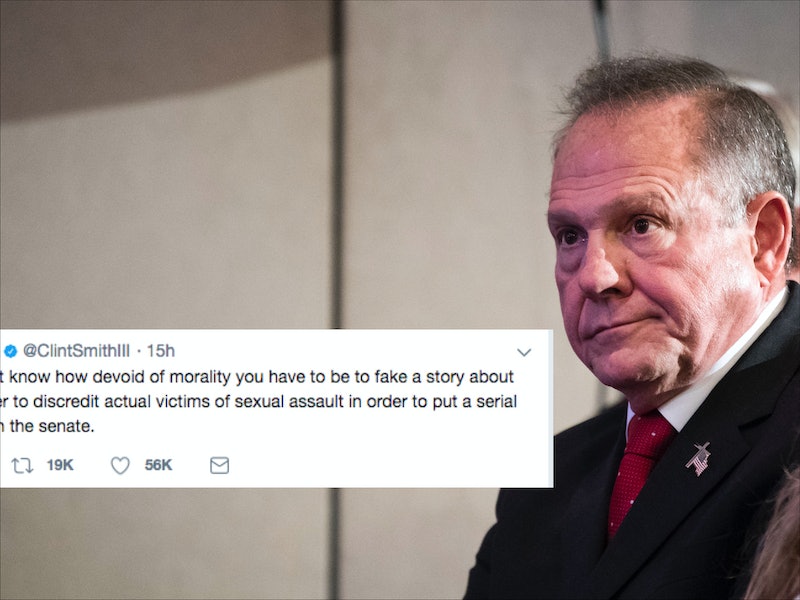 There are so many ways to undermine women. The everyday ways: Laughing off sexual harassment, encouraging women to dress more conservatively, calling someone a "slut." The insidious: Refusing a believe that a woman is telling the truth about her sexual assault because you like or support her perpetrator. Yet there are few stories more disturbing than the Washington Post's exposé of Project Veritas' Jaime Phillips — a plan, according to the outlet, for a woman to lie about being sexually targeted by a Senate candidate in the hope of discrediting women who were legitimately targets of a predator. With the ultimate goal of getting that predator elected.

As Harvard doctorate student and author Clint Smith wrote on Twitter Tuesday: "I really don’t know how devoid of morality you have to be to fake a story about rape in order to discredit actual victims of sexual assault in order to put a serial pedophile in the senate."

To recap: At least nine women have come forward to claim that Senate candidate Roy Moore, who is running for the Senate seat in Alabama vacated by Jeff Sessions, allegedly preyed on them when they were teenagers. The New Yorker reported earlier this month that Moore was apparently banned from a mall for his predatory behavior. (Moore denies every allegation, calling them a "political attack" on his campaign.)

Moore and his supporters, who have historically been distrustful of the mainstream media, have accused The Washington Post and others, including AL.com, of a smear campaign against him. A number of now-debunked social media posts aimed to convince the public that The Washington Post had been looking to plant such a story. On Monday, the paper revealed that it had apparently been targeted in a poorly thought-out sting operation from the conservative "anti-corruption" nonprofit Project Veritas.

According to extensive reports published by the paper Monday, a woman approached the paper claiming that she had been raped by Moore as a teen, and that he had gotten her an abortion when she became pregnant. Some fact-checking revealed key inconsistencies in her story, and the Washington Post discovered her visiting Project Veritas' HQ, suggesting that the woman's goal was to discredit the paper's original reporting on Moore.

Project Veritas has not confirmed that Phillips was part of its sting operation, but the paper found that Veritas had been looking for a dozen new "undercover reporters" to "adopt an alias persona [and] gain access to an identified person of interest" earlier this year. Veritas is a huge operation, with close to 40 full-time staffers and almost a hundred more volunteers, according to the Post. Let's be clear: It is Project Veritas, rather than just Phillips, that is to blame for the attempt to discredit survivors and elect Moore to office.

It was Project Veritas that intended to trick the Post into printing an allegation of rape, and then reveal in a blaze of publicity that Phillips had been lying, if the paper's findings are accurate. It was Veritas that intended to amplify the narrative that women lie about being raped — not just invent a rape narrative, not just amplify it, but to gain a political foothold from it. It was Veritas that set out, allegedly deliberately, to discredit the accounts of multiple women who have already faced a torrent of abuse by coming forward.

To use these women's bravery as a means to gain political ground — with the goal of leaving them ashamed, not believed, and more broken than ever — is misogynistic and monstrous. It uses the sexual abuse of women as a prop, and treats their most traumatic personal experience as a foundation for political gain. For this strategy to work, women must be considered objects, used only as leverage to get a man into office.

If Phillips and Veritas' plan had worked out, as the Post tells it, the backlash could have forced the entire #MeToo movement to ring false. Women already face almost insurmountable mental and legal challenges to even report a sexual assault, let alone go public with their account of one, and the onset of #MeToo has only begun to chip away at those obstacles. If the Post's credibility had been thrown into question by an errant sting operation, then every one of its bombshell reports involving powerful sexual predators would be questioned. Hell, every major news outlets' dogged reporting on sex crimes would be.

Not only would the successful execution of Veritas' plan have been a blessing for serial sexual harassers, and have made coming forward about abuse even more impossible for their victims, it might also have gotten Moore elected. Of course, Moore could be elected regardless — but, much like Comey's letter to Clinton the week before the presidential election, this could have been the straw that broke the camel's back. Moore, to recap, was banned from a freaking mall for his predatory antics, according to The New Yorker.

No doubt Project Veritas and Phillips had their own moral justification. There can also be no doubt that if everything had gone exactly as Phillips and Veritas had intended it to, every woman who has been a victim of sexual harassment and abuse — which is to say, every woman — would have suffered the consequences.

More like this
How To Fight For Reproductive Rights, Based On How Much Time You Have
By Courtney Young
Sandra Bullock, Girlboss Extraordinaire
By Matt Harkins & Viviana Olen
LGBT+ Men Fleeing Afghanistan Were Denied Asylum By The Home Office, New Findings Show
By Sam Ramsden
Celebrities & President Biden Are Enraged By The Leaked Roe v. Wade Decision
By Alyssa Lapid
Get Even More From Bustle — Sign Up For The Newsletter