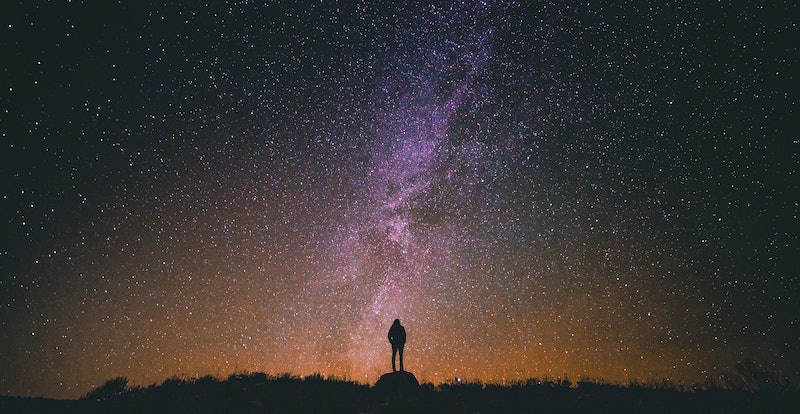 If current events have you hoping for an alternate universe in which the news cycle isn’t a slow march toward destruction, there is hope yet. A new study on the "Cold Spot" in space suggests there may be other universes out there. That means somewhere there is perhaps a version of reality in which The Rock is already President of the United States and Unicorn Frappuccinos are still widely available.

Before we get too carried away trying to figure out all the ways we could address a hypothetical President Dwayne “The Rock” Johnson (President The Rock? Dwayne “The President Rock” Johnson? President Johnson: A Presidential Name So Nice We’ve Elected One Thrice?), this new information is based on highly speculative theories. Because they are based on untested and currently untestable ideas, there is no experimental evidence to support the existence of multiple universes. So, while this new study is setting off nerd alarms, it is not by any means conclusive. But that doesn't mean we still can't enjoy a little parallel universe daydreaming.

In this new study from the UK’s Royal Astronomical Society (RAS), authors suggest that this "Cold Spot," an anomaly in the universe that has baffled scientists for years, could be caused by our universe colliding with another universe. In turn, this would prove that there are multiple universe and even multiple realities.

Tell Me More About This "Cold Spot"

So, you know how one side of your pillow always stays mysteriously cold? This is like that except way more complicated, and actually it’s not like that at all.

First spotted in 2004, the "Cold Spot" is an area in the universe that is slightly colder than its surrounding area. How slightly? It’s only 0.00027 degrees Fahrenheit colder (0.00015 degrees Celsius). For context, the Earth has gotten warmer at a significantly quicker rate than that when averaged year to year. So, if this "Cold Spot" is more like a "Microscopically Cooler Spot", why does it matter?

For starters, this "spot" is huge, spanning about 1.8 billion light years across. Previous research suggested this could be a result of the "Cold Spot" containing less galaxies than other comparable regions of space, as many as 10,000 galaxies less. However, this new study suggests that this theory is not possible, therefore ruling it out as an explanation for its existence.

What Does This Have To Do With A Possible Parallel Universe In Which We Can All Smell What President “The Rock” Is Cooking?

There are possible explanations for the "Cold Spot" that have less to do with a multiverse and more to do with “unlikely fluctuation” related to the Big Bang theory. However, if that isn’t the answer, this new study’s authors suggest it could be something more exciting. As Professor Tom Shanks, an astronomer at Durham University and study’s coauthor, tells the RAS, “Perhaps the most exciting of these is that the Cold Spot was caused by a collision between our universe and another bubble universe.”

The idea of a “bubble universe” is related to the concept of a “multiverse.” As astronomy expert Stuart Clark writes for the Guardian, a multiverse is “a cosmos in which there are multiple universes. And by multiple, I mean an infinite number.” Clark continues, “These uncountable realms sit side by side in higher dimensions that our senses are incapable of perceiving directly.” If you’re looking for a deeper dive into the multiverse, YouTube channel MinutePhysics has a video that explains all the types of parallel universes succinctly and simply.

One Ticket for a Parallel Universe, Please

Not so fast. Again, this is all highly speculative and based in theory that has yet to be tested and proven. There are plenty of opponents of the multiverse theory. One of the most vocal is ironically the person that helped conceive it. In a 2014 interview, theoretical physicist Paul Steinhardt tells Scientific American, “To me, the accidental universe idea [in which the observable universe is accidental] is scientifically meaningless because it explains nothing and predicts nothing.” Basically, it gets us no closer to understanding the universe as a whole.

While not provable fact or an idea that helps us better understand how the universe came to be, it is exciting to know that the existence of a parallel universe and multiple realities isn’t entirely ruled out. At the very least, we can all hold on to hope that there’s a version of ourselves enjoying a President Rock administration while sipping blissfully on a Unicorn frapp.

More like this
How To See The Lunar Eclipse On May 15-16, 2022
By Kaitlyn Wylde
Meet The Disney Imagineer Bringing 'Guardians Of The Galaxy' To Epcot
By Charlie Mock
What To Know About Taking More Than 1 Piriteze Per Day
By Bustle UK
Here’s What Sarah Jessica Parker’s Canned Cosmo *Actually* Tastes Like
By Emma Garza
Get Even More From Bustle — Sign Up For The Newsletter