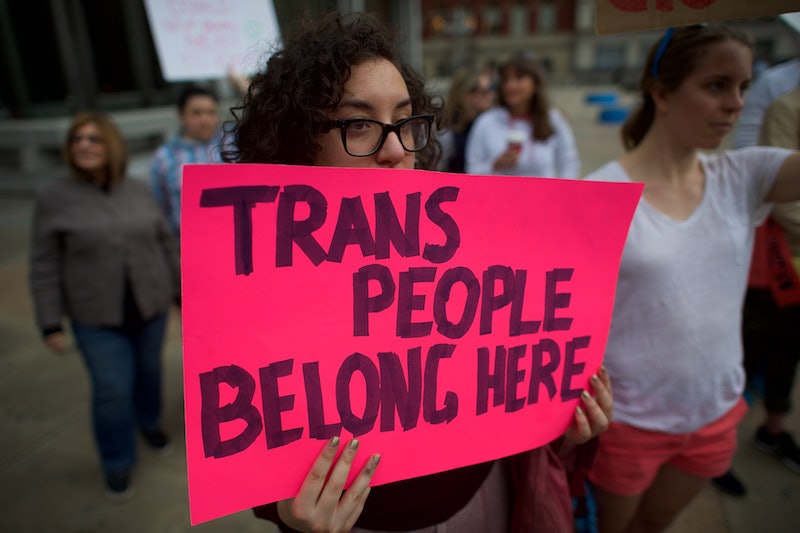 LGBTQ advocates are ringing the alarm bells on a draft rule proposed by the Department of Housing and Urban Development on Wednesday. Critics worry that protections for homeless transgender people could be rolled back if the rule is enacted, BuzzFeed News reported. That's because the new proposal could give federally funded shelters and housing programs the power to discriminate on basis of sex and gender identity.

HuffPost reported the proposal could specifically weaken protections instituted under the Obama administration's Equal Access Rule, which was introduced in 2012. The rule mandated that "shelters and programs do not discriminate on the basis of sexual orientation or gender identity," the National Center for Transgender Equality said in a press statement on Wednesday.

According to the Office of Management and Budget, the new proposal would give shelters the power to consider "an individual’s sex for the purposes of determining accommodation within such shelters and for purposes of determining sex for admission to any facility." Furthermore, homeless shelter providers would also be allowed to consider "privacy, safety, practical concerns, religious beliefs [...] the individual’s sex as reflected in official government documents, as well as the gender which a person identifies with." Bustle has reached out to the Department of Housing and Urban Development for comment.

As it stands, transgender homelessness in America is already a problem. According to the National Center for Transgender Equality, one in five transgender people have experienced homelessness while one in 10 have been evicted from stable housing.

Tweeting about the proposal's repercussions on Wednesday,Washington Post reporter Eugene Scott warned that transgender women may be forced into sleeping or showering next to cisgender men in federally financed shelters and housing initiatives.

If implemented, the Trump administration proposal could worsen the plight of transgender people in America. For years, advocates have highlighted issues plaguing the community. In 2015, National Center for Transgender Equality carried out a survey in which nearly 70% of transgender participants said that they had endured discrimination and violence in homeless shelters due to their transgender identity. This included sexual harassment and physical assault.

Leading civil rights groups in America have slammed the proposal. The senior legislative representative for the American Civil Liberties Union, Ian Thompson, released an official statement, per The Hill.

"This is yet another dangerous and disgraceful attack on transgender people from the Trump administration, as well as another attempt to license taxpayer-funded discrimination in the name of religion," Thompson stated.

According to The Hill, the ACLU representative added that if federally funded shelters and housing programs turned their backs on transgender people, they would give rise to "deadly violence against the trans community on the streets."

The executive director of the National Center for Transgender Equality, Mara Keisling, also gave a fiery rebuke of the draft rule. "The programs impacted by this rule are life-saving for transgender people, particularly youth rejected by their families, and a lack of stable housing fuels the violence and abuse that takes the lives of many transgender people of color across the country," Keisling stated.

"Secretary [Ben] Carson’s actions are contrary to the mission of his Department," she went on to add, "and yet another example of tragic cruelty of this administration."